It's a Pony Kind of Christmas

For the song, see It's a Pony Kind of Christmas (song).

My Little Pony: Friendship is Magic - It's a Pony Kind of Christmas, also titled A Pony Kind of Christmas, is a holiday album containing original holiday-themed songs and new versions of traditional public domain Christmas songs and an extended version of The Heart Carol. It features performances by the cast of My Little Pony Friendship is Magic and the Phoenix Chamber Choir of Vancouver. It was released on on-demand streaming and digital media on November 6, 2015.[1]

An expanded version of the album with five songs from A Hearth's Warming Tail was released on October 7, 2016. That same day, a physical copy was released that includes a booklet and a collectible poster.[2]

The Phoenix Chamber Choir's vocals and the brass were recorded at Warehouse Studios on September 1, 2015.[3][4]

On the iTunes album cover, Twilight does not have wings, but in promotional art for the album, a promo on the My Little Pony Facebook page, and on the other versions of the cover, she does.

Ingram wrote all of the music and lyrics, including altering most of the traditional lyrics. Ingram has stated that the album "shouldn't be considered" canon, claiming that ponies in Equestria "still celebrate Hearth's Warming Eve, not Christmas";[5] however, the characters' celebration of Christmas was depicted in other material, including the Sparkle World story Christmas at Canterlot!,[6] and the Hong Kong Chinese My Little Pony Facebook page.[7][8] 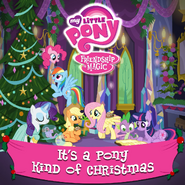 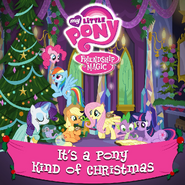 Album cover, alternate version (Twilight does not have wings in this version) 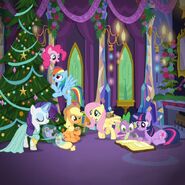