It Ain't Easy Being Breezies

It Ain't Easy Being Breezies is the sixteenth episode of the fourth season of My Little Pony Friendship is Magic and the eighty-first episode overall. In this episode, Fluttershy finds herself catering every whim upon the request of the Breezies. The title may be a reference to the defunct Cheetos slogan It ain't easy being cheesy.

On April 1, 2013, Meghan McCarthy wrote as part of an April Fools' Day joke that the episode is the second part of a two-parter which features Justin Bieber as a guest star, with the first part being the ninth episode of the fourth season, which is a musical episode titled "It Ain't Easy Being Cheesy",[2] and the second part being the sixteenth episode of the fourth season, where he sings with the Breezies.[3] In the previous third generation line of the My Little Pony brand, Breezies, or Breezie Ponies, refers to a fairy-like class of ponies that are small in size and sport butterfly antennae and wings.

The Breezies are first mentioned by Fluttershy in the season four episode Three's A Crowd, where she goes on an expedition to observe them.

When Treehouse TV aired this episode, Seabreeze saying the words "stupid" and "losers" was muted out.

The scene when Fluttershy becomes assertive to the Breezies reappears in Memnagerie.

Cheer for the Breezies

Fluttershy gathers her friends together and informs them of the Breezies' upcoming migration through Ponyville. Pinkie Pie is excited for their arrival, and Rainbow Dash is in charge of creating the breeze for them to glide on. While the breeze is important, Fluttershy says that cheering the Breezies on to give them confidence is also important. She suggests to her friends doing a special cheer for the Breezies during their migration...

"You can do it, Breezies!"
— Mane 6 sans Fluttershy

...adding it's important that they cheer quietly.

The Breezies come to Ponyville

All of Ponyville prepares for the Breezies' arrival with a gathering in the town square. Rainbow Dash, Flitter, and Cloud Chaser create a breeze for the Breezies to ride on, and Fluttershy explains to Mr. and Mrs. Cake the breeze's purpose: to activate the Breezies' magic and protect their pollen.

Twilight Sparkle briefly addresses the ponies of Ponyville, and the Breezies fly overhead—Pinkie Pie is particularly taken by their cuteness. Spike, unable to get a good view of the Breezies, climbs onto a tree branch. However, his excited bouncing shakes one of the tree's leaves loose; the leaf flies into the Breezies' flight path, causing some of them to get separated from the rest of the swarm and swept away by the wind.

Despite the direction of a male Breezie named Seabreeze, the tiny creatures are unable to correct themselves. Fluttershy saves the windswept Breezies and carries them to safety. The rest of the Mane Six commend Fluttershy for her quick actions, while Spike apologizing profusely for his mistake. Rainbow Dash asks if she should make another breeze, but Fluttershy decides to look after the traumatized Breezies for a short while, especially given their sudden attachment to her. Seabreeze however, looks worried by this decision.

After an hour of caring for the Breezies at her cottage, Fluttershy is visited by Twilight and Applejack, who ask if they're ready to go home. The Breezies cling to Fluttershy, however, and she decides to let them stay a little longer, much to the frustration of Seabreeze. As Twilight and Applejack leave, Seabreeze expresses his bitterness about their delay in getting home and has no shortages of criticisms toward his fellow Breezies.

Despite Seabreeze's frustrations, Fluttershy continues to dote on the tiny creatures. When she feels they are well enough to resume their journey, she is about to lead them out of the cottage, until two of the Breezies start coughing and sneezing. They and the rest of the Breezies fake having colds, and Fluttershy allows them to stay even longer, making Seabreeze even more upset.

Seabreeze attempts to make the trip home alone but finds himself unable to fly straight because of the heavy wind. After avoiding being crushed by falling acorns, he eventually crashes into a beehive, upsetting a swarm of bees. Before the bees attack Seabreeze, Fluttershy arrives and kindly asks the bees to leave him alone. When appealing to the bees fails, Fluttershy angrily demands that they leave. The bees finally receive the message and return to their hive.

Seabreeze thanks Fluttershy for saving him; he says that the dangers of Ponyville are why he wants to get home so eagerly. Fluttershy realizes that her kindness nearly cost the Breezies their chance to return home. When Seabreeze wails that no one ever listens to him, Fluttershy places fault on his tendency to shout and insult others. He argues that shouting was the only way to get the bees to listen, and his wings shimmer with a rainbow-colored aura. The same glow is reflected off of Fluttershy's eyes, and she races back to the cottage with Seabreeze in tow.

Fluttershy tells the Breezies once more that it's time to go home. The little creatures protest, but Fluttershy remains firm.

Saddened, the Breezies finally leave Fluttershy's cottage, and Seabreeze silently bows in gratitude to Fluttershy, who breaks down in tears after the creatures have all gone.

The magic of kindness

Rainbow and her Pegasus team are unable to make a breeze moderate enough to carry the Breezies home, with Fluttershy stating it's because there are too few of them to face the wind together. With a spell she learned from a book in the Castle of the Two Sisters, Twilight transforms herself and her friends into Breezies to accompany the creatures home. As one of the Breezies tires during the journey, Seabreeze offers words of encouragement and apologizes for his earlier harshness.

The group of Breezies and ponies-turned-Breezies enter a small opening on the side of a cliff and pass through a slowly closing portal, entering the Breezies' home grotto. The other Breezies happily reunite with the ones they left behind, and Seabreeze reunites with his own family. Before joining her friends at the portal, Fluttershy bids farewell to the Breezies, and Seabreeze gives her a flower to remember them by. The Mane Six fly through the portal just before it closes.

Once back home, Twilight uses her magic to turn herself and her friends back into ponies. As Rainbow Dash expresses interest in being turned into a griffon or dragon and gets rebuffed, Fluttershy looks at the flower in her mane that Seabreeze gave her; it briefly shines with a rainbow-colored glow.

Spike: [hushed] Pinkie Pie, can I hop on you so I can see the Breezies?
Pinkie Pie: [hushed, straining] May explode!

Twilight Sparkle: I, for one, am very proud of you, Fluttershy. Leaping into action like that.
Rarity: I feel like I should design you a special hero's gown! Heh... Or a sash. At least a sash.

Seabreeze: [tirade of indignation]
Applejack: Uh... what did he say?
Fluttershy: I'd... rather not say.

Fluttershy: I'm working on a bee-type dance and was hoping you could help me? Does this bring to mind any images for you? Perhaps a bee?

Twilight Sparkle: This is probably gonna feel a little funny at first, but you're gonna have to trust me.
Pinkie Pie: I love new ideas that make me feel funny at first!

Rainbow Dash: So, uh, I've always kinda wondered what it would be like to be a griffon.
Twilight Sparkle: Not a chance.
Rainbow Dash: You sure? What about a dragon? No? It doesn't have to shoot fire! 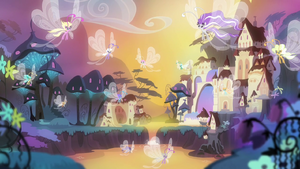