It Isn't the Mane Thing About You

View source
watch 00:15
"It Isn't the Mane Thing About You" - 'My Little Pony' Episode Preview
Do you like this video?
Play Sound

It Isn't the Mane Thing About You is the nineteenth episode of season seven of My Little Pony Friendship is Magic and the one hundred and sixty-second overall.

In this episode, Rarity's shampoo is accidentally switched with Zecora's magical remover potion, and she must fix her devastated mane in time for an upcoming photo shoot.

In production order, this episode is season 7, episode 20.

This episode was previously scheduled to premiere on Canada's Treehouse TV channel on June 24, 2017,[1] but was later replaced by a repeat of Honest Apple.

A clip of the episode was privately shown at Hasbro's HASCON on September 9, 2017.[2]

The anniversary of Pound Cake and Pumpkin Cake's first sneezes reappears in Cakes for the Memories.

The episode opens in Ponyville, where ponies are crowding around Daisy, Lily Valley, and Rose's flower stand and buying flowers for Mares Day. As the flower ponies are overwhelmed by customers, Rarity arrives to help with "color consultations". Once the crowd thins, Rarity orders some lavender for an upcoming photo shoot with Photo Finish for Vanity Mare, a magazine that showcases the most beautiful manes in Equestria. She also buys a large fan from Mr. Breezy and a new chaise lounge from Davenport and helps them with their businesses in the process.

At Sugarcube Corner, Rarity seeks to buy some snacks for Photo Finish's arrival, but she finds Pinkie Pie celebrating Pound Cake and Pumpkin Cake's "sneeze-iversary"—the anniversary of their first sneeze. As part of the occasion, she sprays silly string all over the bakery, covering herself, Rarity, and the Cake twins in sticky, hard-to-remove string. Rarity, worried about her photo shoot the next day, suggests visiting Zecora for some special shampoo for her and a magical cleaning solution for Pinkie Pie.

At Zecora's hut in the Everfree Forest, Zecora presents to them two bottles of liquid—one containing sudsy shampoo for Rarity's mane and one containing magical removing potion for Pinkie Pie's silly string. When Zecora mentions some horrific examples of trying to fix one's mane with magic, Rarity is frightened, causing her to knock the two bottles off the table. She picks up one bottle and quickly heads out the door, leaving Pinkie Pie to depart with the other bottle.

Back at Sugarcube Corner, Pinkie and the Cake twins use the solution in Zecora's bottle to clean up the silly string. But instead of removing the string, it lathers like shampoo. Meanwhile, at Carousel Boutique, Rarity uses the other bottle on her mane in the shower, and when she emerges, she discovers in horror that almost all of her mane hair has fallen out.

Rarity returns to Zecora's hut to find out why this happened, and when Zecora sees Rarity's mane, she realizes that the shampoo and removing potion bottles had gotten mixed up. Rarity asks Zecora to make a cure, believing her situation can be easily fixed, but Zecora reminds Rarity that mane-fixing magic is not simple and will take time. She tells Rarity to go and finish her errands while she brews an antidote in the meantime.

While Rarity feels certain that Zecora's cure will be ready in time for her photo shoot, she is nervous about walking in public with a ruined mane. While walking through the marketplace in a disguise, she is cut in line at Rose's flower stand, called "non-fabulous" at Mr. Breezy's store, and outbid for her new chaise lounge at Davenport's store.

Rarity goes to the Castle of Friendship to lament her situation to Twilight Sparkle and Starlight Glimmer. Desperate, Rarity asks Twilight and Starlight to use their magic to try and restore her mane, despite Zecora's warnings. Unfortunately, they are unable to make a new mane for Rarity without taking the mane of someone else. To make matters worse, Zecora arrives and explains that she can't restore Rarity's mane in time for her photo shoot; Rarity will have to wait until her mane grows back on its own.

A short while later, Rarity brings her situation to Applejack, Rainbow Dash, and Fluttershy's attention, and they agree to help as well. Applejack offers Rarity a wig, Rainbow Dash makes a mane out of clouds, and Fluttershy's animal friends make a mane out of leaves and twigs. However, none of their ideas seem worthy of Vanity Mare magazine, and Rarity considers cancelling the photo shoot altogether.

Shine from the inside out

Later that day, Twilight and the others go to Carousel Boutique to offer Rarity their moral support. As Rarity sulks in the dark with tubs of ice cream, her friends tell her that her mane isn't the only thing about her. They remind her of her growing fashion empire, how she makes her friends feel beautiful with her dresses, and how she generously gave up her tail for a crying sea serpent. Moved by her friends' words, Rarity decides to adopt a new, punk-inspired look so that she can "shine from the inside out".

Rarity goes back to town to show off her new look and give more help to her friends in the marketplace, including Filthy Rich and Mr. Breezy. Despite missing out on Vanity Mare, she thanks her friends for reminding her that she can look good on the outside as long as she feels good on the inside. When Twilight asks how Rarity used magical remover potion on herself, Rarity remembers Pinkie Pie, and the ponies return to Sugarcube Corner to find it a mess of silly string and shampoo bubbles.

Several months later, Rarity's mane has grown back to its original state. At a newspaper stand, Rarity discovers her punk-style mane from months earlier gracing the front cover of Vanity Mare magazine, even though she had cancelled her shoot with Photo Finish. Her friends reveal that they talked to Photo Finish about her new mane and positive outlook, and Photo Finish took pictures of Rarity from the bushes.

Rarity thanks her friends for their help as ponies in Ponyville walk around with similar punk-styled manes.

Rarity: Listen, spooky eyes! Why don't you take a picture, it will last longer!
[squeaking]
Rarity: On second thought, don't! Getting my picture taken in this state is what I'm trying to avoid!

Pinkie Pie: I'll have those cupcakes cleaned off in no time!
Rarity: You really should bake new ones.
Pinkie Pie: Nah!

Zecora: [laughs] There is one story I nearly forgot: of an Earth pony who needed to clean up her shop.
Pinkie Pie: [gasps] That's just what I have to do! Huh, weird!
Zecora: Perhaps it'd be better if I were more clear. You can't clean up Sugarcube Corner from here.
Pinkie Pie: Gee, Zecora, I can take a hint.

Rarity: Honestly! How hard is it to pretend it's not so bad?
Starlight Glimmer: Hard.

Zecora: Oh, no. I'm afraid I can't fix it before the big shoot. But in time, the hair will grow back from the root. There's no magical cure to hasten us through it, unless you went backward in time to undo it.
Starlight Glimmer: Uh-uh. I think we can both say that's not a good option.

Rarity: I have always believed that the right outfit can make up for any other areas that are lacking, but I will need your honest opinions. Haaa...! How awful is it?
Applejack, Fluttershy and Rainbow Dash: [simultaneously] Urgh...
Opalescence: [yowls]
Rarity: Oh, come on! Can't anypony pretend it's not bad?

Pinkie Pie: Great! Hey, is there something different about you? New hoof polish? 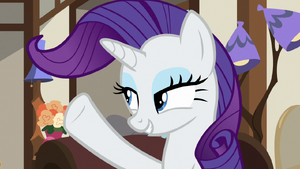 It Isn't the Mane Thing About You image gallery