Ivory Rook is a Crystal Earth pony stallion with a light yellow coat, blue mane and tail, light blue eyes, and a cutie mark of a crenelated tower. He is unnamed in the show, but he is named in merchandise.

In The Crystal Empire - Part 2, Ivory Rook has other forms of fun at the Crystal Faire, like enjoying the petting zoo and watching Rainbow Dash and Fluttershy's jousting match. He helps power the Crystal Heart at the end of the episode.

Ivory Rook takes part in the cleaning of the Empire and accidentally splashes water on Ms. Harshwhinny in Games Ponies Play, and he attends Twilight Sparkle's princess coronation in Magical Mystery Cure.

In Flight to the Finish, Ivory Rook appears in the stadium crowd at the Crystal Empire during the Cutie Mark Crusaders' flag-carrying audition. He also cheers for the Ponyville air relay team in Rainbow Falls, appears at the Rainbow Falls Traders Exchange in Trade Ya!, watches the Games in Equestria Games, and is seen in the crowd welcoming the dignitaries in Twilight's Kingdom - Part 1.

In The Cutie Re-Mark - Part 1, he is among the Crystal Ponies seen in the first alternate timeline created by Starlight Glimmer's actions. Along with the other Crystal Ponies, he is forced to become part of King Sombra's army.

In The Beginning of the End - Part 1, Ivory Rook is mind-controlled by King Sombra and forced to serve him before the Mane Six "defeat" him.

Ivory Rook appears on pages 15 and 18 in the storybook Welcome to the Crystal Empire!

Ivory Rook appears in episodes 5, Saving the Crystal Empire, and 9, The Crystalling.

Ivory Rook is included in Hasbro's online game Crystal Empire Seek & Find as one of the items in level 2.

He is a character called "Ivory Crystal Pony" in Gameloft's mobile game.

A mini-figure toy and collector card of Ivory Rook are to be included in the twenty-first wave of mystery packs. 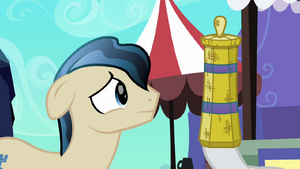