My Little Pony Friendship is Magic Wiki
Register
Don't have an account?
Sign In
Advertisement
in: Unicorn ponies, Female characters, Authors,
and 3 more

Jade Singer, also known as Summer Mane, is a female unicorn pony who appears in the IDW comics' My Little Pony Micro-Series Issue #1. She is a bestselling book author, the Canterlot royal archivist, and an old friend of Princess Celestia.

Jade Singer first appears in My Little Pony Micro-Series Issue #1 as the royal archivist of Canterlot Castle, under the name "Summer Mane". After Summer takes a fall and breaks one of her hooves, Princess Celestia enlists Twilight Sparkle to assist her while she is on the mend. However, Summer initially turns Twilight away quite rudely; she only lets Twilight into the royal archive when she is led to believe she will soon be replaced.

Summer Mane proceeds to lay down the ground rules, the last and most emphasized of which is that Twilight is to never enter Summer's private office. During Twilight's stay at the archive, Summer acts crabby and dismissive toward her, constantly getting her name wrong and criticizing her even as she does a good job of organizing. When discussing books, Twilight mentions that her favorite author is Jade Singer, who mysteriously disappeared after publishing "Canter in the Sky".

Over the next few days, Summer Mane slowly bonds with Twilight over their mutual love of books, and Summer shares with Twilight some of her favorite swing music albums. When they talk about Jade Singer, Summer mentions that she used an old Lipponzoner model typewriter.

Several days later, Summer steps out to run some errands. When she returns to get her checkbook and finds Twilight peeking into her office without permission, Summer angrily chews her out for breaking her most important rule. During dinner that evening, neither one of them can say anything to the other, until Summer Mane tells Twilight to pack her things and leave in the morning.

As she prepares to leave the next morning, Twilight reveals that she lied about Summer Mane being replaced so that she would be allowed inside the royal archive—a revelation that causes Summer to laugh. Summer Mane then reveals to Twilight that she's actually Jade Singer, but Twilight had already figured that out a few days earlier from her reading glasses, her love of swing music, the makeup smearing on cutie mark, and the typewriter she keeps in her office.

Jade explains to Twilight that she went into hiding after "Canter in the Sky" because it was such a big hit that she felt it would be impossible to live up to that a second time. Twilight sympathizes by having to live up to being Celestia's personal student every day and says that friends can help one through it. Encouraged by Twilight's words, Jade Singer publishes a second book titled "Re-Cant" and rekindles her friendship with Princess Celestia.

Jade Singer is a character in Gameloft's mobile game. Her bio states "Legendary author of 'Canter in the Sky,' she went into hiding as Celestia's Royal Archivist when the fame got to be too much for her."

"Those are books. Don't know if you've seen them before, Twylek. Young ponies these days don't read."
— My Little Pony Micro-Series Issue #1

"So, Twylek, what are you reading?"
— My Little Pony Micro-Series Issue #1

"Happens to me all the time, Twilight. Why do you think the books pile up around here?"
— My Little Pony Micro-Series Issue #1

"You know, I wasn't a lot older than you when my book was published. It was a big hit. Too big. You don't know what it's like being that great out of the gate. And having to live up to that a second time."
— My Little Pony Micro-Series Issue #1 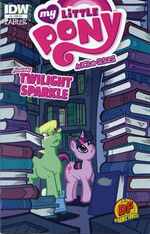 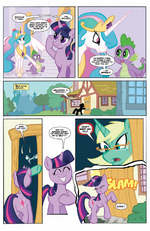 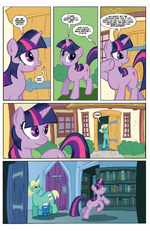 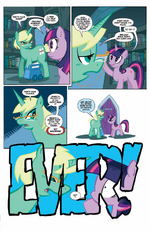 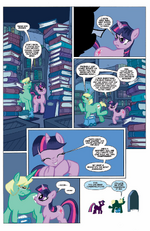 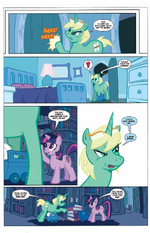