James Marsden is an American actor, singer, and former model. He provides the voice of Hitch Trailblazer in the Netflix animated film My Little Pony: A New Generation.

Marsden's involvement in the film was first announced on June 30, 2021.[1] He has stated in interviews that he accepted the role of Hitch because he "likes to mix it up" and thought it would be nice to "be a part of it and share that experience" with his three children.[2]

Outside My Little Pony, Marsden is best known for portraying Scott Summers / Cyclops in 20th Century Fox's X-Men film series, for which he won a Blockbuster Award for Best Supporting Actor.

In television, Marsden began his acting career guest-starring in various shows like The Nanny, Saved by the Bell: The New Class, Touched by an Angel, and Party of Five. Following this, he had main or regular roles in Second Noah, Ally McBeal, and 30 Rock. He has recently starred in Westworld, Dead to Me, and The Stand.

In other films, Marsden has starred in Campfire Tales, Disturbing Behavior, Gossip, The Notebook, Superman Returns, Hairspray, Enchanted, 27 Dresses, The Box, Death at a Funeral, Hop, Straw Dogs, 2 Guns, and The Butler. 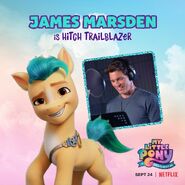 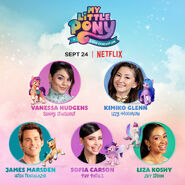 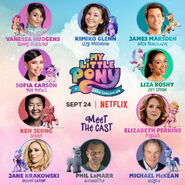