Jeff Letrotski, also known as Lebowski Pony, Richard (the) Hoovenheart, Jeff Letroski, Jeff "The Dude" Letrotski, or simply Letrotski, is a male Earth pony who first appears in the season two episode The Cutie Pox. He is dressed differently in most episodes and in the IDW comics, with a speaking role in Ponyville Days. He is unnamed in the show, but he is named variously in episode credits, merchandise, and other media.

Meghan McCarthy stated on the homage to The Big Lebowski and easter eggs in the show, "Very rarely are those things written into the script, but then when it goes to Studio B and the board artists and Jayson Thiessen, supervising director, I think they have a lot of fun. They have to populate this world with these background ponies and they’re like ‘oh, they’re at a bowling alley, eh?’"[2] A fan's thought that the bowler stallions' inclusion in The Cutie Pox "was just the animators amusing themselves, rather than a sop to the adult audience" has been agreed to by Jayson Thiessen.[3] Tim Stuby "had nothing to do with Lebowski" ponies.[4]

Jeff Letrotski appears alongside Walter and another Earth pony stallion at the beginning of The Cutie Pox. At the Ponyville bowling alley, he dodges Scootaloo's bowling ball as it careens across the building.

Jeff Letrotski, as Richard (the) Hoovenheart, appears alongside a filly at the beginning of Simple Ways when Mayor Mare announces the Pony of Ceremonies for the Ponyville Days festival.

He later appears, with a visible cutie mark of two crossed canoe paddles, alongside another Earth pony stallion at the end of Somepony to Watch Over Me. Here, he cheers and dances with other bayou ponies over Applejack and Apple Bloom's delivery of apple pies.

Jeff Letrotski appears again in Trade Ya! as a food cart vendor at the Rainbow Falls Traders Exchange. Here, his mane style is slightly different from previous appearances and his cutie mark is of an aluminum fryer basket.

In Slice of Life, Jeff Letrotski appears with Walter and "Theodore Donald "Donny" Kerabatsos" at the Ponyville bowling alley. In a speaking role, he agrees to tailor a suit for Dr. Hooves if he joins his team in a bowling championship game. The episode's closing credits refer to him as "Lebowski Pony".

In A Hearth's Warming Tail, the Dude appears in the final group shot with slightly darker coloring.

In The Perfect Pear, the Dude is seen carrying a cart of rugs.

In Growing Up is Hard to Do, Jeff Letrotski appears as a vendor at the Appleloosa County Fair. In The Big Mac Question, he appears with Walter and Donny at the Ponyville bowling alley.

In Gameloft's mobile game, two versions of him are playable characters, similarly to Daring Do / A. K. Yearling, Caramel / Dancing Clownspony, and DJ Pon-3.

The version of him present since early previews has the names Jeff Letrotski[6][7] and either Jeff Letroski (after an update) or Jeff "The Dude" Letrotski (before an update), a different tail style and cutie mark than in Somepony to Watch Over Me and/or in Trade Ya! and/or in Slice of Life, the same outfit as in parts of Ponyville Days and partly in The Cutie Pox and partly in merchandise, and the description "This laid-back pony loves to bowl and lounge around. His bowling rival is the formidable pony Jesús Pezuña."

The version of Jeff Letrotski present since respective March 25, 2014 and April 3, 2014 updates to the iOS and Android versions of the game has the names Richard (the) Hoovenheart and Richard the Hoovenheart, the same tail style as in Somepony to Watch Over Me and in Trade Ya! and in Slice of Life, the same outfit as in Simple Ways,[8] and the description "Virtuous and noble, Richard (the) Hoovenheart does all he can to live up to his name!"

Jesús Pezuña has the description "This highly competitive pony loves to bowl against his rival Jeff Letrotski… and does not like to lose."

Jeff Letrotski appears in a photograph in episode 3 of Baby Flurry Heart's Heartfelt Scrapbook, "All About Alicorns".

Jeff Letrotski appears on the Season 2 poster/DVD set packaging/T-shirt/WeLoveFine.com iPhone case and on The Art of Equestria page 38, is shown in an image from The Cutie Pox on the back of Enterplay trading card series 2 #60 card "The Three Strikes?", is named "Letrotski" with a trademark symbol and given the description "Letrotski abides" on Enterplay collectible card game expansion set Absolute Discord #73 R card of him, is collectively with Walter and "Theodore Donald "Donny" Kerabatsos" called "High Rollers" and given the description "There's nothing these gentleponies appreciate more than a few rounds of bowling and a fine beverage. Just don't step over the line" on Enterplay collectible card game expansion set Equestrian Odysseys #42 R card of them, also appears on the formerly available "My Little Urban Achievers" WeLoveFine T-shirt, and is also shown on Acidfree's first art print.[9]

"I manufacture all of my own garments. We all do, man."
— Slice of Life

"Variables? What are you talking about, man? Just throw the ball straight!"
— Slice of Life

"Seven/ten split, man. Harshest of the harsh. But if you pick this up, we win the whole shebang!"
— Slice of Life

"I'd say that first shop really tied the town together!"
— My Little Pony: Friendship is Magic Issue #30 page 6 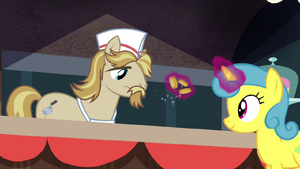