Jet Set and Upper Crust are married upper class unicorns, who reside in Canterlot. They first appear in Sweet and Elite. Both of them have unique hair designs. The phrases 'upper crust' and 'jet set' are both synonyms of upper class society members.

Both ponies feature unique hair designs and some unique clothing. Upper Crust is seen in all her appearances wearing a white shirt and pink sweater draped on her back with the sleeves knotted at the front of her neck, along with earrings and a necklace. Jet Set has a green shirt and white sweater draped in the same manner as his wife's, and wears glasses. Jet Set's green and white attire is the exact shade used by the New York Jets football team.

In Sweet and Elite, the two approach Rarity in Canterlot and inquire about her hat, with Jet Set mentioning that the pair are married. When they learn that Rarity is from Ponyville, they leave in apparent disgust, calling her hat "country".

Later, they are shocked to see Rarity in the VIP box at the Wonderbolts Derby, with Fancy Pants, and then appear multiple times during the song Becoming Popular (The Pony Everypony Should Know). They invite Rarity to the Canterlot Garden Party, a prestigious Canterlot event second only to the Grand Galloping Gala. When Rarity first attends Twilight Sparkle's birthday party, she watches Upper Crust and Jet Set through the window a few times.

After Rarity enters the garden party, Upper Crust walks over to her, and is at first kinder to her, but soon goes back to disliking her. She starts talking with Fancy Pants, and continues to do so in different areas of the party while Rarity hurries between the birthday party and garden party. When the rest of Rarity's friends go out into the garden party, both Upper Crust and Jet Set ask her about them. When Twilight mistakenly shows her up, Rarity accidentally spits punch in the couple's faces, leaving them shocked.

When Rarity is revealed to be from Ponyville, they are part of the group that forms around her, and smile when she seems to be choosing them over her friends. After she chooses her friends, the two laugh at her, but change their minds after Fancy Pants says he finds the Ponyville ponies 'charmingly rustic'.

Both Upper Crust and Jet Set ask to place orders from Rarity after Fancy Pants approves her, but she runs over to Fancy Pants, causing the two to bang heads.

In Hearth's Warming Eve, they both walk by the train station in Canterlot, with their heads raised.

Jet Set can be seen walking around in Canterlot with Golden Harvest in The Crystal Empire - Part 1.

In Spice Up Your Life, Jet Set and Upper Crust appear conversing on Canterlot's Restaurant Row.

In Honest Apple, Jet Set and Upper Crust make a cameo appearance during the fashion show outside Carousel Boutique.

In The Beginning of the End - Part 1, Upper Crust makes a cameo appearance at the beginning inside Canterlot talking to Lyrica Lilac. In The Point of No Return, Jet Set appears strolling through Canterlot before Twilight and Spike get to Dusty Pages's old house. They both appear in Between Dark and Dawn alongside Fancy Pants as the heads of the Royal Swanifying Committee.

In The Ending of the End - Part 2, Jet Set and Upper Crust appear taking shelter with other unicorns in the School for Gifted Unicorns as Canterlot closes itself off from the other pony races.

The two are among other Shadowbolts to pressure human Twilight Sparkle into releasing magic from inside her amulet. Upper Crust is last seen talking with Sour Sweet and Dean Cadance at the end of the film.

On page 13 of My Little Pony: Friends Forever Issue #1, Summer van der Hoof says that Upper Crust "says strawberries are in this year!"

In the Signature My Little Pony magazine issue 69 comic Daring friends and the missing story!, Upper Crust and Jet Set appear at the Canterlot Magic Fair.[3]

Jet Set was made an available playable character in the Android version of the game on April 30, 2014 before being removed a short time later. His in-game description states "Hoof-in-hoof with his wife Upper Crust, Jet Set attends the most extravagant parties in Equestria… but watch out if you're wearing something this polished pony doesn't like! He might just show you the door!"

JET SET and his wife, UPPER CRUST, are Equestria's trendiest married couple. They have a taste for the extravagant and can be unapologetically snobbish about it.

Jet Set: Please excuse our interruption. I'm Jet Set, and this is my wife Upper Crust. We saw you from across the cafe and just had to find out...
Upper Crust: ...Where did you get that simply marvelous chapeau?
— Sweet and Elite

Upper Crust: I thought it looked a little country.
Jet Set: I told you it wasn't something you could get here in Canterlot, dear.
— Sweet and Elite

Jet Set: Can you believe what that pony is wearing?
Upper Crust: It's just so plain.
— Sweet and Elite

Upper Crust: Oh, I'd like to place my order right now!
Jet Set: I think you should get two!
— Sweet and Elite 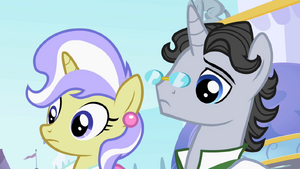