Jetstream, or Jet Stream, is a female background Pegasus pony with a pink coat, light red mane and tail, blue eyes, and a cutie mark sometimes of a white cloud with light red rain and other times of a pink cloud with a yellow lightning bolt. She is not named in the show, but she is named in merchandise, and her name is used in other media.

Jetstream has thus far appeared in only two episodes: Boast Busters in season one and Hurricane Fluttershy in season two.

On My Little Pony: Friends Forever Issue #18 cover A, Jetstream's name is displayed as "Jet Stream" on a list of Cloudsdale High School Spirit Award recipients.

Jetstream is a playable character in Gameloft's mobile game, added in the version 4.3 update. Her in-game description states, "Jetstream spends her time doing what she can to help Cloudsdale: She was recently spotted carrying water up to the city in a time of crisis."

In Enterplay's collectible card game, Jetstream is named on card α #7 C, which gives her the description "An accomplished long-distance flier, some say Jetstream will be the first pony to fly nonstop all the way across Equestria." 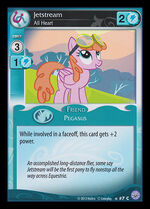