Joe, also known as Pony Joe and Donut Joe, is a male unicorn pony and baker who appears in several episodes and the IDW comics. He shares his design and eye color with S04E20 Unnamed Unicorn Stallion #1 and has a similar color scheme to Cherry Gold and MandoPony and Feather Bangs. The name "Joe" is a diminutive form of the name "Joseph." Given his affiliation toward donuts, it's also possible that Joe refers to the slang term for coffee.

Joe first appears in The Best Night Ever as the owner of a donut shop in Canterlot. When the main characters are traveling to Canterlot for the Grand Galloping Gala, Spike tries to tell Pinkie Pie that they should go to his "favorite donut shop." Later in the episode, the friends rejoin Spike in Joe's shop after they run away from the Grand Galloping Gala. Spike refers to Joe as "Pony Joe", and Joe immediately recognizes Twilight and exclaims, "Long time no see."

He next appears in MMMystery on the Friendship Express aboard a train to Canterlot, having picked up in Ponyville the final ingredient for his own dessert to enter into the dessert competition: a mini city made of donuts he dubs "Donutopia." He gloats about its glory and is confident that it will reign superior over the competitor's entries, including the Cakes' Marzipan Mascarpone Meringue Madness. In the episode, Twilight initially addresses Joe as "Donut Joe"; he is referred to simply as Joe for the remainder of the episode.

Pinkie Pie later blames Joe for sabotaging the Cake's cake with a wild theory involving him doing so as a spy reminiscent to James Bond. Shortly thereafter, he's proven innocent by Twilight, who, with basic reasoning, proves Pinkie Pie's account to be a preposterous accusation.

Shortly later, he eats the éclairs being entered into the contest by rival chef Gustave while his own entry is reduced to ruin by baker Mulia. Fortunately for him and the other bakers, what's left of the desserts is combined together at Pinkie's suggestion, creating a dish that ultimately wins the dessert contest with flying colors.

Joe appears to be a friendly and prideful baker, seeing his confidence in his dessert entry to win him first prize. When he is proven guilty of eating Gustave's éclairs, he reveals it was not out of spite. Rather, it was because of how Pinkie Pie described it in such a beckoning manner. He sincerely compliments Gustave on his baking skills, and is in turn complimented by Mulia.

Joe appears in Just for Sidekicks with a train's refreshment trolley, one which subsequently gets knocked over by the main characters' pets. He confronts Spike, who is pet-sitting them all, and demands recompense, forcing Spike to pay up with one of his gemstones.

Joe appears in the background of his donut shop in Amending Fences.

Joe appears at the end of The Ending of the End - Part 2 as the Mane Six and Spike celebrate their victory over Queen Chrysalis, Lord Tirek, and Cozy Glow with donuts.

In My Little Pony: Friendship is Magic Issue #8-9, Joe appears in Ponyville: on Issue #8 page 14, Apple Bloom calls Princess Luna "as much part of Ponyville as Mr. & Mrs. Cake, or Joe or Twist—", and on Issue #9 page 3, he appears inside a "Donut Joe's" stand at the Summer Wrap-Up Festival and Hoedown.

Joe is a playable character in Gameloft's mobile game, and acts as an enemy minion during "The Crowning Achievement" event. His in-game description states, "Joe is a baker that has a donut for a cutie mark. He is the owner of a donut shop in Canterlot and is a friendly and proud baker."

Joe, along with a host of characters from the show, appears on the Comic Con 2011 poster.

"Don't you think you've had enough?"
— The Best Night Ever

"Picking up the final all-important ingredient for my contest entry, "Donutopia!" And with these super-sprinkles, my donuts are going to dunk all the other lousy desserts, steal first prize, and make my donut shop famous, forever!"
— MMMystery on the Friendship Express

"Ha, if they really want to carbo load for the Equestria Games, they should be eating my doughnuts. That'll put some heft on your bones!"
— Enterplay collectible card game Canterlot Nights #37 R card of Joe[4] 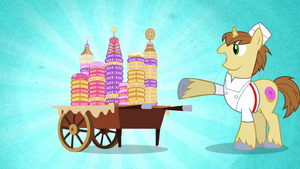