Jonagold is a background Earth pony and a member of the Apple family. She has a pale yellow coat, a two-tone orange mane, purple eyes, and a cutie mark of three green apples. She is unnamed in the show, but she is named in merchandise.

Jonagold's name is the same as the shared name of the Jonagold brothers.

Jonagold first appears at the Apple family reunion in Friendship is Magic, part 1 when she and the rest of the Apples meet Twilight Sparkle and Spike. She appears later—with a different cutie mark—as one of Fluttershy's fans in Green Isn't Your Color.

In Over a Barrel, Jonagold briefly joins Pinkie Pie on stage during You Got to Share, You Got to Care, and she takes part in the conflict between the ponies of Appleloosa and the buffalo.

In Too Many Pinkie Pies, Jonagold briefly appears at Applejack's barn-raising at Sweet Apple Acres. In Magic Duel, she is in the audience during Twilight's performance for the Saddle Arabian delegates at the end of the episode.

In Apple Family Reunion, Jonagold attends the reunion with other Apple family members and takes part in the raising of the new barn during Raise This Barn. She also appears in the family photo.

In Pinkie Apple Pie, Jonagold appears in a photo on a wall in Goldie Delicious' cabin. She appears as a spectator of the Ponyville turkey call competition in Filli Vanilli, at the Rainbow Falls Traders Exchange in Trade Ya!, in the stadium crowd in Equestria Games, and in Appleloosa at the end of Twilight's Kingdom - Part 2 with a different mane style.

In Bloom & Gloom, Jonagold appears fleeing from a swarm of twittermites. She races Peachy Sweet in a steeplechase and watches the Appleloosa rodeo in Appleoosa's Most Wanted.

A texture matching Jonagold has been included in the Gameloft mobile game's saa_type01_master_03.pvr file.

A mini-figure toy of Jonagold was displayed at the 2015 American International Toy Fair and is available in one of six Friendship is Magic Collection Single Story Packs, which names her with a trademark symbol. Jonagold also appears on WeLoveFine's fan-designed "Apple Family Portrait" art print.

"[gasps] Trouble Shoes!"
— With other crowd members in Appleoosa's Most Wanted 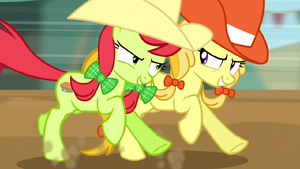 Retrieved from "https://mlp.fandom.com/wiki/Jonagold?oldid=1421165"
Community content is available under CC-BY-SA unless otherwise noted.