Junebug is a female Earth pony who first appears in the season two episode Secret of My Excess. She has a dark chartreuse coat, a two-toned orange mane, and mint green eyes. Her cutie mark is of three leaf sprigs in the show and a bumblebee in merchandise and other media.

Junebug shares her name with a G3 Earth pony.

Junebug first appears in the season two episode Secret of My Excess. As she takes a sip of water from a fountain, Spike approaches her and tells her it's his birthday. Junebug wishes Spike a happy birthday, and Spike asks if she has a present for him. When Junebug says she doesn't have anything, Spike tries to take the baskets of flowers she's carrying. Twilight Sparkle stops Spike and apologizes to Junebug on his behalf, and Junebug goes on her merry way after wishing Spike a happy birthday again.

She appears again in the season four episode Leap of Faith. During Flim Flam Miracle Curative Tonic, she watches in amazement as Silver Shill dances out the tent after Flim and Flam's tonic appears to heal his legs.

In season seven, Junebug appears as part of the angry mob in Fame and Misfortune, briefly in the background in Triple Threat, and in line to buy flowers at the Ponyville marketplace in It Isn't the Mane Thing About You.

In season eight, Junebug appears in a crowd of scared ponies during the "Friends and Family Day" sequence in School Daze - Part 1 and in the audience for Twilight's play in Horse Play.

In season nine, Junebug briefly appears in Canterlot as one of King Sombra's mind-controlled slaves in The Beginning of the End - Part 2. In Common Ground, she makes a background appearance doing the wave at a buckball game in a newsreel being played at an Appleloosa movie theater. She also appears inside the theater as part of the newsreel's audience.

Junebug is a playable character in Gameloft's mobile game. The game is the first time that her cutie mark is visible on the show design of her. Her in-game description states, "As pretty as a picture, as warm as the warmest hug, they call this chartreuse-colored pony the lovely Junebug!"

Another mini-figure and collector card of Junebug were released as part of the tenth wave of mystery packs. The toy uses the same Rarity mold as the previously released Junebug but with a different color scheme, and the collector card included states "JUNEBUG loves to celebrate with friends!"

In the Equestrian Odysseys expansion set of Enterplay's collectible card game, card #85 C names Junebug with a trademark symbol and attributes to Mint Jewelup the quote "Junebug is such a dear, not even a sourpuss like Lemony Gem could get mad at her." 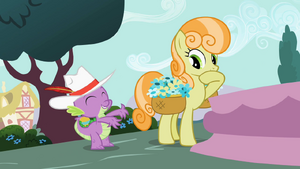 Retrieved from "https://mlp.fandom.com/wiki/Junebug?oldid=2157513"
Community content is available under CC-BY-SA unless otherwise noted.