Juniper Montage is a female human who appears as the main antagonist of the Equestria Girls half-hour specials Movie Magic and Mirror Magic. She is an usher at the Canterlot Mall movie theater and a former gofer on her uncle Canter Zoom's movie studio set.

Juniper first appears in the second special Movie Magic meeting Twilight Sparkle and Rainbow Dash on the set of the new Daring Do movie. She introduces herself as the niece of the film's director Canter Zoom as well as his personal gofer, often tasked with getting him coffee and preparing film shoots. She is also the keeper of the keys to every area in the movie studio. Being a big fan of the Daring Do series, Juniper wanted her uncle to cast her as Daring in the movie, but he passed her over in favor of star actress Chestnut Magnifico.

When a number of mishaps occur around the studio, such as the sabotage of a volcano set and the theft of several important movie props, Juniper is revealed to be the culprit responsible. She admits that she did these out of bitterness over not being cast as Daring Do and her resentment toward Chestnut Magnifico. While she is forgiven by her uncle, Juniper gets banned from the studio. As she is escorted off the set by studio security, she looks back at Twilight and her friends with malice.

Sometime after the events of Movie Magic, Juniper has a job at the Canterlot Mall as a movie theater usher. Though her uncle got her the job out of pity, she is very unsatisfied with the menial position and resentful toward the Mane Seven for ruining her chances of becoming famous. While trying on sunglasses at a mall kiosk, Juniper looks in a hand mirror enchanted with Equestrian magic and sees her idealized self as a famous movie star. She becomes obsessed with this mirror to the point of vanity.

While cleaning up popcorn, Juniper discovers that the mirror can trap things inside it. When the Mane Seven appear before her, she vents her frustrations at them for ruining her life and imprisons them within the mirror. Later on, when confronted by Sunset Shimmer, Juniper imprisons her as well. With the girls trapped together in limbo, the power of their geodes activates more of the mirror's magic and transforms Juniper into a giant, monstrous version of her fantasy self.

Once transformed, Juniper becomes so lost in the fantasy that she believes the people she's terrorizing are adoring fans and paparazzi. Starlight Glimmer attempts to reason with Juniper, but she refuses to listen. When Starlight offers Juniper friendship instead of fame, Juniper undoes all the magic that the mirror created, freeing the Mane Seven from their prison and turning herself back to normal. Juniper apologizes to the girls for her actions, and they forgive and accept her as their new friend.

In the holiday special Holidays Unwrapped, Juniper is mentioned by Pinkie Pie in "Saving Pinkie's Pie", and she appears walking through the mall at the beginning of "Dashing Through the Mall".

Juniper appears in the novelization of the specials, Magic, Magic Everywhere!, her role essentially unchanged from the specials. However, the novel describes her as having freckles, which she does not have in animated form.

In the two-part Equestria Girls Minis short "The Show Must Go On", Juniper appears in a mischievous role, sabotaging the Mane Seven's movie premiere evening.[1][2]

Juniper Montage is Film Director Canter Zoom's niece and apprentice, who dreams of becoming an actress. Socially awkward and obsessed with anything to do with film, she is a wealth of knowledge on the set of the Daring Do movie. Although she comes across as a know-it-all, her poor social skills make her oblivious to any discomfort she causes others. She is extremely ambitious, highly resourceful, and desperate to prove herself, especially to her uncle, who she secretly resents for not taking her seriously as an actress.[3]

When first introduced, Juniper is portrayed as very friendly and innocent. Like Twilight Sparkle and Rainbow Dash, she is a huge fan of A. K. Yearling, having met her once and gotten her to sign her copy of the latest Daring Do book. She also appears to be a big movie enthusiast, having worked on the sets for all of her uncle's movies and evidenced by her film reel-shaped hairpins. She shares her movie interest with Twinkleshine.[5]

However, toward the end of Movie Magic and in Mirror Magic, Juniper's true colors come to light. Her desire to be cast as Daring Do and become a famous movie star is so strong that she is willing to sabotage the production of a film. When her dreams are not realized, she lashes out at those responsible, demonstrated when she uses a magic hand mirror to trap Sunset Shimmer with her friends in limbo. Juniper also shows considerable indifference for her job as a theater usher, willfully ignoring her boss, groaning over any tasks given to her and wanting the annoying customers to go away.

In her transformed state, Juniper's views on the world become warped to the point where she perceives screaming people as adoring fans. However, she does express deep remorse at the ends of Movie Magic and Mirror Magic, her actions stemming from a desire to be liked by others.

"I tried to convince him to cast me as Daring Do, but... [bitter] he really didn't go for that."
— My Little Pony Equestria Girls: Movie Magic

"I'm sorry! Okay? I'm sorry. I just can't stand Chestnut! She's always eating all the peanut butter praline crunch bars, which are the only candy bars I like. [...] And I was mad at you for casting her as Daring Do! I mean, I have told you over and over again how badly I wanted to play Daring Do, and you just ignored me!"
— To Canter Zoom, My Little Pony Equestria Girls: Movie Magic

"This should be my night! I would have found a way to be in the film if you all had stayed out of it! I would have been Daring Do! Everyone would've loved me!"
— To Mane Seven, My Little Pony Equestria Girls: Mirror Magic

"I wish you'd all just go away and leave me alone!"
— To Mane Seven, My Little Pony Equestria Girls: Mirror Magic

"I just wanted to be Daring Do. I just wanted people to like me."
— My Little Pony Equestria Girls: Mirror Magic

"I wish I could make up for my mistakes."
— My Little Pony Equestria Girls: Mirror Magic 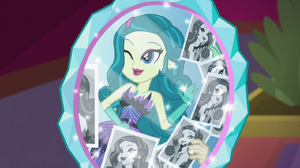