Just for Sidekicks is the eleventh episode of the third season of My Little Pony Friendship is Magic and the sixty-third episode overall. In this episode, Spike finds himself in over his head after convincing Twilight Sparkle and her friends to let him take care all of their pets in exchange for a few gems when they go to the Crystal Empire. The title of the episode is a play on the term "just for kicks".

This episode and Games Ponies Play take place simultaneously, with the former focusing on Spike taking care of the main cast's pets and the latter focusing on Twilight Sparkle and her friends welcoming the Equestria Games inspector to the Crystal Empire.

The episode is listed on the iTunes Store, Zap2it and Netflix as the eighth episode of the third season.[2][3] Storyboard artist Raven Molisee listed the episode as number 308 on DeviantArt,[1] and show layout supervisor Tim Stuby wrote on Twitter that he'd "guess it is either 308 or 312"[4] and that it's "not 312..."[5]

The pictures featuring Peewee, absent from this episode's script, were added when the episode was storyboarded.[6]

The episode opens in Golden Oak Library, on a gallery of pictures of Spike and Peewee, the phoenix that Spike hatched in Dragon Quest, showing Peewee being returned to his parents. Spike himself is seen baking a jewel cake as Owlowiscious watches. He prepares to mix jewels into the cake batter, but ends up inadvertently eating them. Upon realizing that all the jewels are gone, he blames Owlowiscious. The owl shows Spike his reflection in a spoon, and Spike notices jewel dust on his lips. He shouts in despair before noticing one last jewel on the floor. He intends to mix it into the batter, but ends up eating it as well. Spike shouts in despair once more as Owlowiscious rolls his eyes.

As Spike despairs over his having no jewels (and thus no cake), there's a knock at the door; it's Fluttershy and Angel. Fluttershy is here to ask Spike for a favor since she and her friends are expected in the Crystal Empire the following day to help welcome the Head of the Equestria Games. Spike knows all about this and reminds Fluttershy that he wasn't invited. Fluttershy feels guilty over this and prepares to leave, saying that all she had to offer Spike in consolation was a jewel - a rather large jewel, Spike points out. Spike agrees to do Fluttershy's favor (even if it means looking after Angel), and Fluttershy thanks him before leaving. As Spike eyes the jewel Fluttershy gave him, he thinks to himself: Fluttershy isn't the only one whose pet might need looking after.

After a bit of sweet-talking and (in Pinkie Pie's case) silliness-dodging, Spike gets Rainbow Dash, Rarity, Pinkie Pie, and Applejack to agree to letting him look after their pets as well, with some jewels as compensation. When they stop by the next morning to drop their pets off at the library, Twilight Sparkle even lets Spike watch over Owlowiscious. Some warm goodbyes are exchanged between pet and owner, and the six friends leave to board the train. Twilight expresses concern that Spike might not be able to handle taking care of six animals by himself, but he assures her that he has it under control. Twilight says goodbye and leaves. Spike closes the library door, and the six pets proceed to make a mess of everything.

When Spike regains consciousness after Tank accidentally knocks him out, he finds the library in complete chaos: Winona is chasing Angel around in circles, Gummy is ruining Twilight's books, Opalescence is ripping up the curtains, and Tank inadvertently catapults Owlowiscious across the room. Spike attempts to enforce some order. He manages to get Winona, Tank, Owlowiscious, Opal, and Gummy in a row, but Angel has taken off outside the library.

With Winona's help, Spike soon tracks the rebellious rabbit to the Cutie Mark Crusaders' clubhouse, where Apple Bloom, Sweetie Belle, and Scootaloo fawn over him. Spike tries to get the Crusaders to look after Angel for him, but the Crusaders have plans to get their cutie marks in skydiving. Spike, the smooth talker he is, convinces them to try and get their cutie marks for bunny-sitting instead. He even gets them to take the rest of the pets off his hands too. But he ends up having to relinquish one of his jewels (the one Rarity gave him) so the Crusaders could buy food and toys for the pets.

When Spike passes by the clubhouse later that day with fresh baking ingredients, he finds the Cutie Mark Crusaders are having just as much trouble looking after the pets as he was. He's forced to assume responsibility for the pets again, but not before demanding the jewel he gave them. They say they don't have it anymore, as the gem was used to buy an industrial-sized pet dryer. The pets drag Spike all over Ponyville. He crosses paths with Zecora, who believes she has the solution for Spike's misfortune. But the help she offers involves donating one of his jewels to a nearby Filly Guide, explaining that there is "no worse mojo than dragon greed". Down another jewel and reaching his wit's end, Spike wraps the pets up in ribbon and rolls them across town, having to surrender yet another jewel to Granny Smith to buy her silence.

After freeing himself from Spike's clutches, Angel sneaks aboard the train. Spike attempts to retrieve the bunny, but the train conductor refuses to let all the pets on without a chaperone. Spike sees the Cutie Mark Crusaders on a nearby bridge; he snatches them up and has them act as the pets' chaperones, and the conductor lets them board (in exchange for another jewel). Spike finally catches Angel, but the train has pulled away from the station. Next stop: the Crystal Empire!

Trouble on the train

The Crusaders fail to contain their excitement about seeing the Empire. Once again, the hungry pets have gotten loose; they make a mess of Pony Joe's donut cart, and Spike is forced to relinquish one of his last two jewels to pay for it.

The train pulls into the station, and the Crusaders want to have a look around. Spike forbids them from leaving the train car, but after a bit of tickle torture with one of Scootaloo's feathers and some backup from Angel, they get past him. Spike chases after Angel and spots Twilight and her friends about to board the Ponyville-bound train. As the Crusaders admire some crystal snow globes in a shop window, Spike sees Angel running toward Fluttershy and gives chase again. Using his last remaining jewel (Fluttershy's large emerald), Spike obstructs Angel's path with a pile of luggage and catches him.

Spike, the Crusaders, and the pets board the train again, but so have Twilight and her friends, who are right in the adjacent train car. They hide under the seats as the ponies enter to sit down. Angel threatens to give Spike and the others away by kicking Applejack's seat from underneath. Spike admits defeat and tells Angel to do his worst, apologizing for ignoring him, trying to pawn him off on someone else, and not fluffing his tail as promised. He extends this apology to the rest of the pets and faults his own greed. The pets quickly forgive Spike, but his growling stomach almost gives them away. Angel dashes off the train, retrieves the emerald, and force-feeds half of it to Spike to satiate his hunger.

When the train pulls into Ponyville, Twilight and her friends get off from one end of the train, while Spike, the Crusaders, and the pets get off from the other end, pretending to have come to meet them. Twilight and Fluttershy commend Spike on doing a good job of taking care of their animal friends. Sweetie Belle casually mentions Crystal Empire's snow globes, making Rarity suspicious and nearly blowing their cover, but she states that it was a lucky guess.

Returning to the library, Spike goes back to making his cake, using the half emerald as an ingredient. He inadvertently eats it. In an ironic parallel to how the episode began, he cries out in despair.

Scootaloo: [muffled] Has anyone seen Tank's head? Where's his head?!
[door opens]
Spike: What have you done to the turtle?!
[pop, head comes out of shell]
Scootaloo: Ohh, I totally forgot he could do that.

Applejack: Whooee, my dogs are barkin'.
Winona: [barks]
Applejack: Did y'all hear that? They really are!

Sweetie Belle: So we could hear all about the Crystal Empire, and find out if you brought us one of the crystal snowglobes that they sell at the train station!
Rarity: How did you know about the snowglobes?
Sweetie Belle: Um... lucky guess?

Twilight Sparkle: So what are you thinking? Bake 'em into a jewel pie? Mm, six-layer gem cake sounds pretty good!
Spike: Yeah, it does. [slurps] It really really does. [pause] Whyyyyyyyyy???!!! 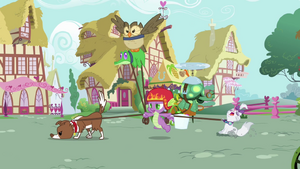