Waiting for the arrival of Princess Celestia.

Hey Rarity, I've shined my hooves for the arrival of Princess Celestia.

Rarity admiring herself through Pinkie's hoof.

That's quite the reflection.

"I'm surpised she's not here yet"

"I wonder why is it taking so long?"

"And where are Applejack and Fluttershy?"

"She's bringing an important visitor. That could be part of it."

"A visitor who's important and slow."

"She still had many more terribly important things to do before she got here."

"Maybe the visitor has a deer antler, a goat leg, a bat wing, and a snake tail!"

"Why in the wide, wide world of Equestria would Princess Celestia..."

The Mane 6 and Spike shocked.
Add a photo to this gallery

"With all due respect, Princess Celestia. How could you bring Discord here?!"

I am well aware that the last time Discord was here, he caused serious havoc

You remember what he did to us?

There is no way we're giving Discord a second chance!

"And tricking us all into being the opposite of our true selves."

Pinkie is angry over whipped cream.

Only the one and only Pinkie Pie would care about whipped cream dollops.

What a regal shot of Princess Celestia.

Your idea is bad and you should feel bad!

This is an awful, terrible plan!

It's going to destroy us all!

It's the worst plan since "Cutie Mark Crusaders brain surgeons"!

I guess we could use the Elements again, right girls?

The Elements of Harmony!

The Elements! I haven't seen them since we defeated Discord.

"Now where is Fluttershy?"

"Fluttershy? Really?"
Add a photo to this gallery

"What's he going on about now?"

We are pretty sure that beaver was not as polite as you made him out to be, Fluttershy.

Opening of the dam scene. View of Fluttershy and AJ

Beaver: I refuse to be talked to that way by a background pony!

Even when angry, Fluttershy still manages to look adorable on all occasions.

Applejack getting pouty while Fluttershy holds her back

Impatient Rainbow Dash
Add a photo to this gallery

Fluttershy being doubtful in herself. What else is new?

Fluttershy blushing is so cute.

"You may release Discord…"

I must go - my planet needs me!

Alright, girls let's do this!

Maybe these ponies put on their Necklaces of Harmony...

...but with Twilight's magic?

Getting ready to release their once mighty encounter.

It's now or never!

Oh, they sure do look amazing.

Working together to free Discord.

A beautiful view of the elements together.

AH! After a few episodes, I'm free! It's time to rule Equestria once again!

This guy is so utterly flexible.

Well it's about time!

Somepony got me out of that prison block.

I'm coming for you Dirty Dan, and your partner in crime Pinhead Larry.

What are you doing Discord?

And you're relying on the yellow moeblob to do it!

I was conscious the whole time

I'll give you the stare!

No, not the stare!

Not impressed by the Care Bear Stare

I've disobeyed Celestia's orders for the greater good on a fairly recent occasion.

Hug my life
Add a photo to this gallery

Fluttershy wants to be hospitable.

Twilight and friends angry at Discord.

We're keeping an eye on you.

That had better be on the market soon!

Like it? It's a Discord original, obviously an improvement on the original design.

This is a trainwreck. Except I am going to be looking away.

I have confidence this will work.

Just leave it to me, Twilight.

Would you fancy a spot of tea, Fluttershy?

I got a bad feeling about this.

Discord chowing down on pieces of paper.

It's a word salad

Discord in a robe, how cute

"Are you sure this isn't overdoing it?"

Discord and Fluttershy talking in a spinning house, so trippy.

Angel: Pardon me while I go throw up

Can you explain why there is a page missing from this book?

That does explain Discord eating some paper.

Maybe at one point, Rarity took off her Necklace of Generosity...

...put on the purple and pink dress she's made and then put the necklace back on again.

Wow... that came out of his mouth.

"It's gonna be a bumpy night."

Awww! I'm going to name it George! You're a good little gravy boat aren't you George!? Yesh you are!

Getting hot gravy poured down your pants can't be pleasant.

That burned my stomach!

Ugh, this is a mix of Dr. Seuss and Beauty & the Beast

"Something fishy is going on."

But Magikarp are incapable of learning Water Gun!

Get away from me!

"That's what friends do."

I never had a friend for life..

The ponies shocked to hear the news

What's that? Timmy is stuck in the well?

We just don't know what went wrong!
Add a photo to this gallery

Can Fluttershy deal with discorded beavers?

Fluttershy took off her necklace again

Joke's on you, ponies. I Lied!

Tens across the board!

What's it going to be Fluttershy, your element,

...or stay as Discord's friend.

It takes a special somepony to make anger and adorable go perfectly together.

Now I know I've got a heart, 'cause it's breaking…

Discord returns everything to normal.

Now, I'm sure mischief is totally fine if I fix things afterwards. Besides—zeitgeist and all that.

What? Don't you trust me?

This is just after Fluttershy put back on her necklace.

Fluttershy and her new friend, Discord.

Yeah.... not so much.
Add a photo to this gallery

Twilight using a spell to unfreeze Discord from his statue state.

Twilight Sparkle sure is a good magic user! Trixie would be jealous. 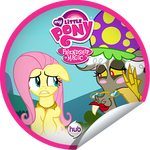 From GetGlue.
Add a photo to this gallery
Retrieved from "https://mlp.fandom.com/wiki/Keep_Calm_and_Flutter_On/Gallery?oldid=2084715"
Community content is available under CC-BY-SA unless otherwise noted.