King Longhorn is a male bull and leader of the Cattle Rustlers gang. He appears in My Little Pony: Friends Forever Issue #8 as a minor antagonist and in the two-issue story arc The Good, the Bad and the Ponies as the main antagonist.

King Longhorn and his gang first appear in the My Little Pony: Friends Forever Issue #8 story Reins, Trains and Carts with Wheels, during Applejack and Rarity's cross-country trip to Applewood. They stampede alongside their stagecoach and demand their valuables. Applejack, having pent-up frustrations over the course of her trip with Rarity, leaps from the carriage and physically assaults the bulls. In a daze, Longhorn declares that Applejack and Rarity "haven't seen the last of [them]."

King Longhorn appears again in the Friendship is Magic Issue #25 and #26 storyline The Good, the Bad and the Ponies. He and his gang terrorize the Apple family town of Canter Creek and frequently demand supplies and food from its civilians. This puts him on a collision course with Applejack; when she stands up to him, he throws her through a barn wall.

Thinking that Applejack's presence could throw a wrench in his plans to take over Rancho Bronco, Longhorn plots to run her out of town. He sets fire to a barn and warns Applejack of more such disasters if she stays in Canter Creek. The next day, he and his gang lead a frenzied cow stampede through the middle of town, causing further damage. The townsfolk attempt to fence Longhorn and the Cattle Rustlers out, but they easily break through and bully them out of more food and water.

With the ponies of Canter Creek demoralized and Tumbleweed stepping down as the sheriff, Longhorn meets with the town clerk and makes final preparations to claim the town as his own. Through the Mane Six's efforts, however, his plans are thwarted when Princess Celestia declares Rancho Bronco a historic Equestrian landmark. When Longhorn destroys the barn a second time, Twilight Sparkle jails him and his gang in a makeshift prison.

Longhorn is a character in Gameloft's mobile game, and serves as a boss during the "High Plains Ponies" event. His bio states "The nefarious leader of the Canter Creek Cattle Rustlers...and determined to get his hooves on the Rancho Bronco by any means necessary."

King Longhorn is typically portrayed as calmly condescending and devious but prone to aggressive and furious outbursts. He is frequently brash toward Tumbleweed, thinking little of his threats. He is also not above resorting to physical violence in order to achieve his goals, as evidenced when he shoves Applejack through a barn wall and threatens to harm Rarity.

"You haven't seen the last of us! We'll be back in another issue!"
— My Little Pony: Friends Forever Issue #8

"Whoever controls Rancho Bronco controls Canter Creek. I plan on that being me."
— My Little Pony: Friendship is Magic Issue #25

"Shame about your barn, ma'am. It'd be terrible if anything else happened while you were staying here."
— Friendship is Magic Issue #25

"Groan... I missed some place I needed to initial in all that paperwork?! I hate stuff."
— My Little Pony: Friendship is Magic Issue #26

"I think the first thing I'll do is change the name to Rancho Longhorn! Has a nice ring to it, right?"
— Friendship is Magic Issue #26

"Everybody off my property... or I'm going to have to hurt the lady."
— Friendship is Magic Issue #26 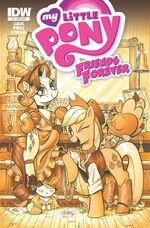 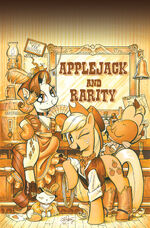 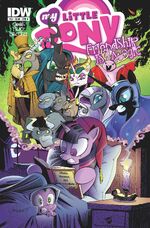 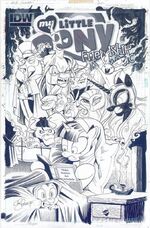 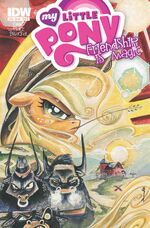 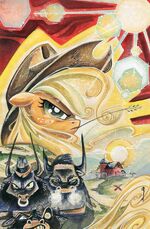 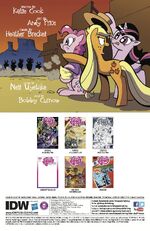 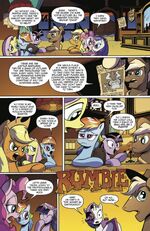 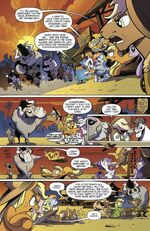 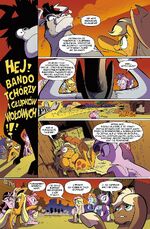 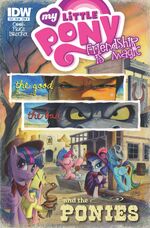 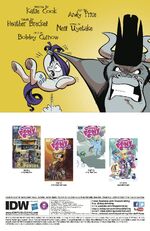 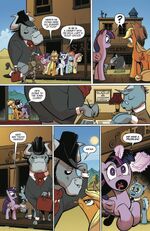