My Little Pony Friendship is Magic Wiki
Register
Don't have an account?
Sign In
Advertisement
in: Humans, Female characters, Celebrities,
and 5 more

Kiwi Lollipop, also known as K-Lo, and Supernova Zap, also known as Su-Z, are two female human characters who appear as the antagonists of the Equestria Girls hour-long special Sunset's Backstage Pass. They are a pop music duo under the name PostCrush.

In Sunset's Backstage Pass, Kiwi Lollipop (K-Lo) and Supernova Zap (Su-Z) appear as the headlining act at the Starswirled Music Festival, promoted as reuniting for a one-night-only concert after spending an indefinite amount of time on hiatus. Though they are promoted as best friends, their friendship is actually strained due to the pressures of stardom.

On the first night of the festival, K-Lo and Su-Z discover a magical artifact from Equestria called the Time Twirler, which they use to turn back time by one day, so they can make their reunion concert "perfect". Unbeknownst to them, Sunset Shimmer gets caught in the Time Twirler's effect and becomes trapped in the time loop with them. Whenever something went wrong with K-Lo and Su-Z's concert or it did not meet K-Lo's high standards of perfection, they used the Time Twirler to reset the day.

K-Lo believes her chance to rise back to stardom is ruined, but Sunset and Pinkie convince her and Su-Z that their fans do not care if their concert is perfect; they just want to see PostCrush play music and have fun. Remembering how much fun they used to have performing together, K-Lo and Su-Z reconcile their strained friendship and perform their song True Original—with Sunset Shimmer and Pinkie Pie on backup.

In the second season of the Digital Series, Sunset Shimmer mentions PostCrush while introducing their light show expert for a backstage video at the music festival in How to Backstage. In the Choose Your Own Ending shorts, Su-Z's pet dog Princess Thunder Guts is featured in Lost and Pound. Depending on the ending, Su-Z reunites with her lost dog with the help of Rarity, Spike, or Fluttershy. K-Lo also appears with Su-Z on a festival brochure and also in person in the Rarity ending in a non-speaking role.

Kiwi Lollipop and Supernova Zap are featured in the "You Choose the Ending!" novelization of Sunset's Backstage Pass, My Little Pony: Equestria Girls: Make Your Own Magic: Starswirl Do-Over, their role largely the same as in the special. In one possible ending of the novelization, they and Sunset Shimmer get trapped in the time loop for all eternity when the Time Twirler breaks. In another possible ending, K-Lo and Su-Z invite Sunset to join PostCrush in exchange for not foiling their plans, but they trick her when the time loop resets.

Supernova Zap: Heeeey. The usual delivery guy looks like two girls today. [...] I mean, today's the first time we have done this! Yesterday was, um... a different day.

Kiwi Lollipop: [groans] Your voice? So flat! Ugh! I can't!
Supernova Zap: [groans] Whatever! We can just do it all over again!

Kiwi Lollipop: We're gonna loop our show 'til it's perfect! A fangirl like you wouldn't get it.
Supernova Zap: Unless you're such a fangirl, you do get it.
Kiwi Lollipop: You know fans can never get it.

Supernova Zap: Now that I've seen your faces, I'm an art school dropout, and you better believe I can draw your faces so good, guards will ban you at the gate from now until 4eva!
Kiwi Lollipop: 4eva-eva!

Kiwi Lollipop: We did use to have a lot of fun.
Supernova Zap: Guess we got so wrapped up in the pressure to be perfect...
Kiwi Lollipop: ...we forgot.

Kiwi Lollipop: This one's for real.
Supernova Zap: [sighs] Let's do it then. For real. It'll be you and me. Just like old times. Whatever happens happens.

Kiwi Lollipop: Are you happy with yourself? Now we can never deactivate the Time Twirler.
Sunset Shimmer: We're stuck here...forever?
Supernova Zap: Welp, it's gonna be a long eternity.

Kiwi Lollipop: How about instead of crashing our little party, we make a deal instead? It just so happens that PostCrush is looking for a third member.
Supernova Zap: Hey, I didn't know that!

Supernova Zap: Not just anybody can be in PostCrush. So you better get used to being thrown out of PostCrush every day for the rest of forever.
Kiwi Lollipop: Sometimes, you just don't get a do-over. 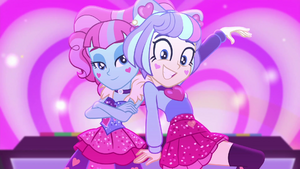