Kristin Chenoweth is an American Emmy and Tony award-winning actress and singer. She provides the voice of Princess Skystar in the feature film My Little Pony The Movie.

Chenoweth's involvement in the film was first announced in a press release by Lionsgate in August 2015.[1] In regards to her role, she has joked in interviews that she was cast "because they wanted to get someone life-sized,"[2] referring to her short height of 4'11", and that she dabbled in method acting for the role, making sure her hair was "on point for every recording session".[3]

Outside My Little Pony, Chenoweth is an actress and singer with credits in musical theatre, film, and television. She made her Broadway debut in 1997 as Hyacinth in the Roundabout Theater Company production of Scapin and as Precious McGuire in Kander and Ebb's Steel Pier. Two years later, she appeared in the 1999 Broadway revival of You're a Good Man, Charlie Brown as Sally Brown, for which she won a Tony Award for "Best Performance by a Featured Actress in a Musical". In 2003, she returned to Broadway originating the role of Glinda the Good Witch in the Broadway musical Wicked, for which she was nominated for a Tony Award for "Best Performance by a Leading Actress in a Musical". Her other stage work includes five City Center ENCORES! productions, The Apple Tree in 2006, Promises, Promises in 2010, and On the Twentieth Century in 2015, the last of which also earned her a Tony nomination.

In film, Chenoweth has appeared in the 2005 film version of Bewitched, the 2006 remake of The Pink Panther, RV, Deck the Halls, Four Christmases and Hit and Run.

In animation, Chenoweth lent her voice to Space Chimps, Sit Down, Shut Up, Rio 2, and Strange Magic. She was also the original voice of Rosetta in the Disney Fairies movies until she was replaced by Megan Hilty. She also provided some dog sounds for the role of Snoopy's love interest, Fifi, in The Peanuts Movie. She is set to voice Mouse in the upcoming 2017 animated film The Star.

Chenoweth has also released six solo albums: Let Yourself Go, which contains several Broadway and big band standards; As I Am, her inspirational Christian album; A Lovely Way to Spend a Christmas, which is her holiday album; Some Lessons Learned, a country album; Coming Home, a live album recorded in a theater named in her honor in her hometown of Broken Arrow, Oklahoma; and The Art of Elegance. 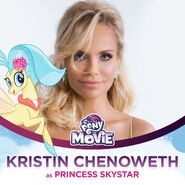 Chenoweth alongside Tara Strong, the voice of Twilight Sparkle; June 6, 2017. 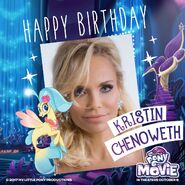