Lady Gaval, or Lady Justice, is a female background Earth pony who first appears in The Cutie Mark Chronicles. She has a lime green coat, two-tone orange mane and tail, purple eyes, and a varying cutie mark either of a gavel or of an hourglass. She is unnamed in the show, but she is named in merchandise and other media.

Lady Gaval, along with Dane Tee Dove and Tall Order and as well as Surprise and Soarin, was to appear in Friendship is Magic, part 1.[1]

Lady Gaval first appears, with an hourglass cutie mark, at Aunt and Uncle Orange's Manehattan dinner party in Applejack's flashback in The Cutie Mark Chronicles. She expresses outward confusion at what a rooster is.

Lady Gaval later appears at Golden Gavel's auction during Becoming Popular (The Pony Everypony Should Know) in Sweet and Elite. In A Friend in Deed, Lady Gaval appears with a gavel cutie mark during Smile Song, standing next to Mayor Mare and Tall Order.

In season four, Lady Gaval appears briefly as a Games spectator in Equestria Games. In season five, she attends the Grand Galloping Gala in Make New Friends but Keep Discord.

In season six, she appears at the swap meet in Manehattan in The Gift of the Maud Pie.

Lady Justice is a character in Gameloft's mobile game, and serves as a boss battle helper during the "Rarity's Retro Revolution" event.

A mini-figure toy and collector card of Lady Gaval are included in the twenty-second wave of mystery packs. The collector card states about Lady Gaval, "She talks to friends often." In Enterplay's collectible card game, Lady Gaval is named "Lady Justice" on cards α #63 F and #Pƒ16, both of which list the quote "I know you're all just trying to help, but it's my civic duty to list off the eight Ponyville regulations you broke in the last five minutes."

"I know you're all just trying to help, but it's my civic duty to list off the eight Ponyville regulations you broke in the last five minutes."
— Enterplay collectible card game cards α #63 F and #Pƒ16 of Lady Justice 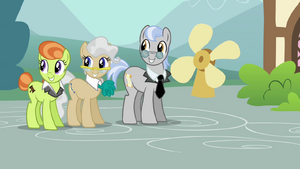