Larry, or "Shadowfright" as he first prefers to be called, is a secondary antagonist in the second arc of the comic series. He is the leader of the Nightmare Forces/Dark Forces, a race of dark shadowy creatures that resemble ghosts and create nightmares. He appears only in the comics. The name Larry is a diminutive version of the name Lawrence.

Larry initially has the appearance of a dark smoky being, bigger and darker than his followers. He is a darker grey than the other Nightmare Forces shown and has red eyes outlined with black. He is also slightly larger than the others. Larry's shape and design appear to be based on those of a bird.

When Larry returns to normal at the end of Issue 8, his design bears even more of a resemblance to a bird, with purple feathers and a reddish-pink hide.

Larry is featured prominently in the comics' second story arc, serving as a supporting antagonist and follower of Nightmare Rarity. He prefers being addressed as "Shadowfright," and becomes angry whenever anyone (except Nightmare Rarity) calls him by his real name.

In Issue 5, though Larry himself is not mentioned, it is said that when Princess Luna was Nightmare Moon, Larry and the others would tell her what to do to get ponies to fear her, giving her their energy and hate. She became queen of the Nightmare Forces. When Luna was restored by the Elements of Harmony in Friendship is Magic, part 2, she thought the Nightmare Forces would wither and die without their queen, but they instead went to the moon, where they would be granted one more chance in the cycle of the new moon to claim a kingdom of their own, as Nightmare Moon had promised them.

After giving Rarity nightmares about her friends rejecting and abandoning her, the Nightmare Forces kidnap her and take her to the moon on the Nightmare Dreamscape. Larry appears in person in Issue 6, and transforms Rarity into Nightmare Rarity to be their new queen. The Nightmare Forces use nightmares on Twilight Sparkle, Rainbow Dash, Pinkie Pie, Fluttershy, and Applejack, but Luna and Spike snap them out of it. Larry tries to convince Luna to become Nightmare Moon again, but she declines, and Larry reveals Nightmare Rarity to them, saying that with Rarity possessed, the Elements of Harmony are useless and Ponyville is defenseless.

In Issue 7, Nightmare Rarity argues with the ponies before Larry and the others attempt to capture them, with Spike being thrown aside. After a brief scuffle, the shadows come out on top and take the ponies (with the exception of Spike) to a dungeon inside a large castle. Larry and his 'sidekick' talk with Rarity and make plans to attack Ponyville. Upon learning his sidekick lost the dungeon key, he sends him to go find it. Later, with Nightmare Rarity's assistance, he and his sidekick capture Spike.

In Issue 8, before the Nightmare Forces' attack on Ponyville, Larry reveals to Spike that a piece of Rarity's old self is still alive inside Nightmare Rarity. As he shatters Spike's fire ruby, he openly mocks the dragon's love for Rarity, declaring that the destruction of Ponyville will make her transformation permanent. During the siege on Ponyville, Princess Luna, with the help of Twilight and her friends, cleanses the moon creatures of their evil, giving them a more normal appearance. Larry no longer resembles smoke and bears features more closely resembling a bird. Following this change, he goes back to being called Larry.

"We will get the kingdom we were promised!"
— Issue 6

"Now the Elements of Harmony will be destroyed forever and Ponyville will be defenseless! Meet our new queen- Nightmare Rarity!"
— Issue 6

"You will watch as your beloved Rarity destroys your home along with all the love you have for her. Then the transformation will be permanent."
— Issue 8 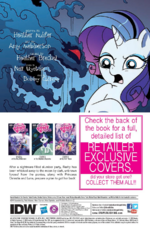 Shadowfright on the credits background of Friendship is Magic Issue #6 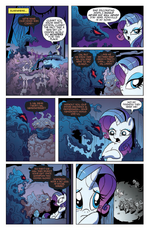 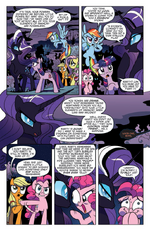 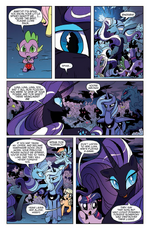 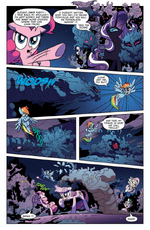 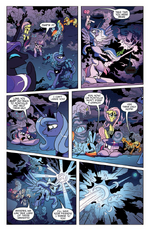 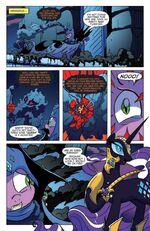 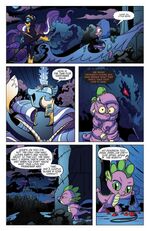 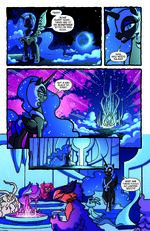