/ˈfaʊst/) is the creator of My Little Pony Friendship is Magic. She is credited as the executive producer for the first season, and consulting producer for the second. During the first season, she used her DeviantArt page to reply to fans and address questions about the show. She later added a Frequently Asked Questions entry that collected these questions and answers.

Faust has an original pony character that is featured as an Alicorn on the WeLoveFine T-shirt "Iconic Print" and as a unicorn in My Little Pony: The Castles of Equestria. In the IDW comics, Faust is alluded to on My Little Pony Micro-Series Issue #10 page 19 via Faust's Traveling Circus and on My Little Pony: Friendship is Magic Issue #71 page 3 via a Ty LF message.

Faust's professional credits extend from voice work in 1994 through art and writing and, by 2004, directing and development of shows such as The Powerpuff Girls and Foster's Home for Imaginary Friends. She is married to the creator of both shows, Craig McCracken. Some of Faust's earliest professional work include being an animator for the character of Sawyer on Turner Feature Animation's Cats Don't Dance and an animator on Warner Bros. Feature Animation's The Iron Giant. She has also been involved in Bronies: The Extremely Unexpected Adult Fans of My Little Pony[6] and Fighting is Magic,[7] later re-branded as Them's Fightin' Herds in August 2015. She is also the creator of the original toyline "Milky Way and the Galaxy Girls".

Faust is listed in the opening credits of every episode and, until the end of season three, the closing credits, and in the writing credits for Friendship is Magic, part 1 and part 2. Until sometime in October 2014, Hasbro Studios' website listed her as the show's author, with her name misspelled as "Laurent Faust".[8]

She was a co-producer, story editor and writer for the first season of Wander Over Yonder.[9] She developed the CGI film Medusa for Sony Pictures Animation and was set to direct the film,[10] but she left the project because of creative differences.[11] Faust currently serves as an executive producer for the DC Super Hero Girls animated television series which premiered on Cartoon Network in 2019.[12] 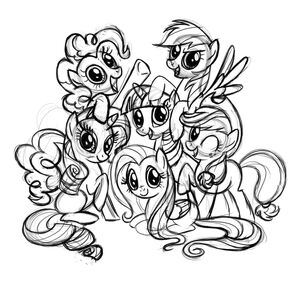