Not to be confused with Daisy.

Lavender Bloom is a female Earth pony with a pale magenta coat, lime mane, emerald green eyes, and a cutie mark of two daisies. She is unnamed in the series, but she is credited as "Brunch Pony 2" in Fame and Misfortune and named in merchandise.

Lavender Bloom is almost completely identical to Daisy except for a slightly different mane style. She also shares her design with S04E24 Unnamed Earth Mare #1 and "Soft Spot" and her mane and tail style with "Ivy Vine".

In Rarity Investigates!, Lavender Bloom sits in the private box seats at the upper tier of the Canterlot stadium watching the Wonderbolts. In Made in Manehattan, she appears walking through Manehattan and watching the Midsummer Theater Revival.

In The Saddle Row Review, Lavender Bloom attends the grand opening of Rarity For You.

In Fake It 'Til You Make It, Lavender Bloom briefly appears as a customer at Rarity For You.

A mini-figure toy and collector card for Lavender Bloom were released as part of the Manehattan-themed twentieth wave of mystery packs. The collector card states that she and Blueberry Curls "go on fun shopping trips."

"I agree. I'm seeing sides of these ponies I didn't know were there. I only wish they'd left Rarity out. She clearly doesn't belong in that book with the rest of them."
— Fame and Misfortune 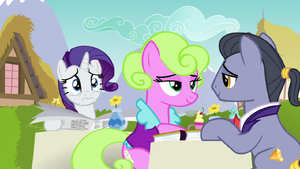