Lemon Hearts is a female unicorn pony with a yellow coat, a cerulean mane and tail with a lighter tail streak, raspberry eyes, and a cutie mark of three hearts; two light blue and one light green. She has speaking roles in several episodes, beginning with Green Isn't Your Color, and in the IDW comics and chapter books.

Lemon Hearts shares her design with Twinkleshine and her tail style with Daisy, Golden Harvest, and Strawberry Sunrise.

Lemon Hearts is commonly featured as a background pony. During running sequences, her eye color turns blue and her eye style often changes to one resembling Rarity's; her tail also loses its lighter streak.

She makes her first appearance in Friendship is Magic, part 1 in Canterlot. She appears before Twilight Sparkle, alongside Twinkleshine and Minuette, while carrying a present on her back. She has no spoken lines in the scene, but she receives Twinkleshine's remark about Twilight when the studious unicorn turns down the offer to join them at Moon Dancer's get-together. Later in the episode, she appears at Pinkie Pie's party in Ponyville's library and is among the ponies who visually yell "Surprise!" to Twilight. Since then, Lemon Hearts has been a common sight in Ponyville.

Lemon Hearts attends the Grand Galloping Gala in The Best Night Ever and makes it into the V.I.P. section. She takes photos of Wonderbolts Spitfire and Soarin with fellow Gala attendees "Charm" and "Masquerade".

Lemon Hearts appears in Luna Eclipsed dressed as a mouse. In Putting Your Hoof Down, she offers two bits for the cherry Fluttershy wanted to buy for Angel's salad.

In The Crystal Empire - Part 1, she is among the ponies at the Crystal Faire when Rainbow Dash flies back to the Crystal Empire castle with the flag. In Spike at Your Service, she looks from the window as Spike slides down the roof. In Games Ponies Play, she sells baked goods for Cotton Cloudy.

Lemon Hearts appears at the beginning of The Cutie Map - Part 1 walking towards the Friendship Rainbow Kingdom castle alongside Neon Lights. She is also seen twice in Apple Bloom's first nightmare running from the twittermite infestation in Bloom & Gloom. She participates in the Running of the Leaves in Tanks for the Memories, attends Cranky Doodle Donkey and Matilda's wedding in Slice of Life, appears at the Grand Equestria Pony Summit in Princess Spike, and appears in Party Pooped.

Lemon Hearts appears in Amending Fences, in which she is referred to by name for the first time in the series and reconnects with old friends Twilight Sparkle and Moon Dancer. In Do Princesses Dream of Magic Sheep?, she appears in Ponyville's shared dream. In Canterlot Boutique, she briefly appears during Rules of Rarity. In Brotherhooves Social, she appears as a spectator at the Sisterhooves Social. She appears in the final group shot during Friends Are Always There For You in The Cutie Re-Mark - Part 2.

In The Gift of the Maud Pie, Lemon Hearts rides the Friendship Express to Manehattan and later walks over a Manehattan bridge. In No Second Prances, she appears walking in the Ponyville Park with Caramel and subsequently appears sitting at the park talking to White Lightning. In A Hearth's Warming Tail, she kisses "Autumn Leaf" on the cheek underneath mistletoe, and later appears at the hearth's Warming Eve party inside the Castle of Friendship during Hearth's Warming Eve Is Here Once Again (Reprise). In Spice Up Your Life, she appears in Canterlot's Restaurant Row talking to Neon Lights and later appears being shown a flyer for the Tasty Treat during It's Gonna Work. In The Cart Before the Ponies, she appears spectating the Ponyville Applewood Derby during Derby Racers.

In Celestial Advice, Lemon Hearts appears listening to Sunburst in the Castle of Friendship after the Starlight Glimmer's Equestrian Pink Hearts of Courage award ceremony, and later appears as a filly in Princess Celestia's flashback in the School for Gifted Unicorns, using a potion to grow a flower with Moon Dancer. In Forever Filly, she makes a cameo appearance walking by Canterlot Carousel with Minuette. In Parental Glideance, she appears in Canterlot sitting with Twinkleshine and Minuette spectating the Wonderbolts' showcase , standing in the line for the Wonderbolts' autograph signing and watching the Wonderbolts' as they participate in a ribbon-cutting ceremony. In A Royal Problem, she watches a ribbon-cutting ceremony by Princess Luna in Canterlot. In Discordant Harmony, she makes a background appearance walking by the Ponyville Day Spa. In Fame and Misfortune, she makes background appearances in Ponyville walking across a street and later over a bridge, walking through Canterlot, as an anti-Rarity picketer in front of the Carousel Boutique and in the crowd of ponies arguing outside the Castle of Friendship. In Triple Threat, she makes background appearances attending the Dragon Flame of Friendship ceremony in Ponyville. In It Isn't the Mane Thing About You, she makes a background appearance walking through the Ponyville marketplace with Cherry Berry. In Shadow Play - Part 2, a pony resembling her appears falling victim to the sirens' spell and fighting with another village in the Pillars of Equestria's flashback.

In The Maud Couple, Lemon Hearts appears in the Ponyville Comedy Club listening to Maud Pie's standup act. In Grannies Gone Wild, she appears at the Las Pegasus Hot Air Balloon port in a line to ride a balloon with Twinkleshine and Minuette. In Marks for Effort, she appears eating a cupcake while operating a stand selling pastries at the Ponyville marketplace and looks about in surprise upon hearing Scootaloo's scooter braking. In The End in Friend, she appears spectating a buckball game at the School of Friendship between Rainbow Dash and Rarity's teams. In Yakity-Sax, she makes background appearances watching the Wonderbolts' derby in Canterlot, walking through the Ponyville marketplace and attending a party at Sweet Apple Acres. In The Washouts, she makes a background appearance walking in Ponyville with Shoeshine and later in the audience for the titular group's two shows in Ponyville. In A Rockhoof and a Hard Place, she appears as part of Professor Fossil's archeology team excavating Rockhoof's old village carrying buckets of water, and subsequently appears walking with Raspberry Vinaigrette in Ponyville as Rockhoof shouts about Cranky Doodle Donkey's rash. In Sounds of Silence, she makes a cameo appearance walking in front of the Castle of Friendship.

In My Little Pony Best Gift Ever, Lemon Hearts appears as a background character walking through the Rainbow Falls Hearth's Warming Craft Fair and later appears in front of Flim and Flam's stand.

In The Beginning of the End - Part 2, Lemon Hearts appears in Canterlot as one of the hypnotized ponies by King Sombra. In The Point of No Return, she appears as a patron of the Canterlot Library and later appears walking outside Dusty Pages' old home. In She's All Yak, she appears in the reused shot from "The Cutie Re-Mark - Part 2" during Fit Right In. In 2, 4, 6, Greaaat, she spectates the buckball game between the School of Friendship and the School of Magic, cheers during the halftime cheerleading routine and leaves after the stadium ends. In The Summer Sun Setback, she appears as one of the angry unicorns accompanying the Flaming Sky Firework Unicorn Troupe after they are guiled by Crackle Cosette into not performing a fireworks show for the final Summer Sun Celebration in Canterlot. She later appears in the audience for the Celebration after its setbacks are resolved. In Growing Up is Hard to Do, she makes a background appearance reading a newspaper while riding on the Friendship Express. In The Ending of the End - Part 1, she appears as a shopkeeper at a thread shop, refusing to let Rarity in for a thread as the result of Queen Chrysalis tricking Earth ponies, unicorns and Pegasi into despising each other. In Part 2, she seeks refuge from the Windigos with the other unicorns in the School for Gifted Unicorns and later assists the rest of Equestria in helping the Mane Six defeat Chrysalis, Lord Tirek and Cozy Glow. In The Last Problem, she appears in Twilight's flashback riding on the Friendship Express with Twinkleshine, talking to Rare Find during preparations for Twilight's coronation as ruler of Equestria and attending the coronation.

Lemon Hearts makes a brief appearance in the beginning of My Little Pony: Rainbow Roadtrip, talking to Minuette in Ponyville market.

A pony with a similar color scheme and name is Lemony Gem, a unicorn pony with the same design as Amethyst Star, Diamond Mint, and Lyra Heartstrings who appears in The Ticket Master, Call of the Cutie, Green Isn't Your Color, The Best Night Ever, Sweet and Elite, Princess Twilight Sparkle - Part 1, and Canterlot Boutique, usually wearing a pink saddle with a light pink skirt underneath. However, she is much more differentiated from Lemon Hearts due to her cyan eye color and different cutie mark, which is seen in The Best Night Ever.

Lemon Hearts is one of many ponies seen in the establishing shot of Ponyville in My Little Pony Equestria Girls: Rainbow Rocks.

In My Little Pony The Movie, Lemon Hearts appears with Red Delicious in the audience for Songbird Serenade's performance at the Festival of Friendship in Canterlot.

In Triple Pony Dare Ya, Lemon Hearts appears with Twinkleshine waiting in line for Granny Smith's Hearth's Warming fruitcake at the Ponyville marketplace.

Lemon Hearts makes a speaking appearance in chapter 4 of My Little Pony: Pinkie Pie and the Rockin' Ponypalooza Party!, "The Spring-Sproing-Spring Party!"

Lemon Hearts is a character in Gameloft's mobile game, and serves as an enemy minion during "The Crowning Achievement" event. The game's description of her states, "She's a yellow unicorn with a bright cerulean mane, who wears her heart on her sleeve... and in her name!"

A mini-figure toy named Lemon Hearts was released as part of the first wave of mystery packs in November 2010 and as part of the Toys "R" Us exclusive Friendship Celebration Collection. The toy uses the Rarity mold but features the show character's color scheme and cutie mark. Her name comes from the packaging of the toy releases. According to the back of the European mystery pack collector card, Lemon Hearts "is loving and kind".[3] The description on the back of the Australia/U.S. mystery pack collector card adds, "She always takes time to show her friends how much she cares."[4] The illustration on the front of both versions of the card depicts Lemon Hearts standing outside Carousel Boutique. The Friendship Celebration Collection toy package has a different description and reads, "LEMON HEARTS and PEPPERDANCE play together in a band!"[5]

Lemon Hearts appears as one of the guests attending the wedding of Shining Armor and Princess Cadance in the My Little Pony First Look and Find book, with the same design as on the first collector card.

A third Lemon Hearts mini-figure toy and collector card pair is part of the tenth wave of mystery packs, which has been displayed at the 2014 American International Toy Fair.[8] This collector card uses the same mane style and description as the previous collector card.[9]

A Lemon Hearts mini-figure toy and collector card pair is part of the twelfth wave of mystery packs.

"She's an embarrassment to all things fashion!"
— Green Isn't Your Color

"I'll give you two bits for that cherry."
— Putting Your Hoof Down

"I liked that one almost as much as the one with the lacy trim and all the embroidered cuffs! [chuckles]"
— For Whom the Sweetie Belle Toils

"So what brings you by anyway? All those times you've come back to Canterlot, you never had donuts with us before."
— Amending Fences

"Uh, yeah. It's true. I do the big events mostly. State dinners, that sort of thing."
— Amending Fences

"She's right full of herself, that's what!"
— The Fall of Sunset Shimmer

"Do it again!"
— Pinkie Pie and the Rockin' Ponypalooza Party! 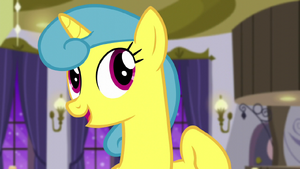