Lemony Gem, or Lemony Gems, is a female unicorn pony with a yellow coat, an aqua mane and tail with a streak of darker aqua, cerulean eyes, and a cutie mark of three brilliant-cut diamonds. She is not named in the show, but she is named "Lemony Gem" sometimes with a trademark symbol and "Lemony Gems" in different merchandise and other media.

Lemony Gem makes several appearances throughout the series as a background pony, usually wearing a pink saddle with a frilly skirt that obscures her cutie mark.

Her first appearance is in The Ticket Master, outside the Golden Oak Library when Pinkie Pie reveals that Twilight Sparkle has tickets to the Grand Galloping Gala.

In Call of the Cutie, Lemony Gem attends Diamond Tiara's cute-ceañera; she eats one of Apple Bloom's burnt cupcakes before immediately spitting it out. She is seen interacting with "Dinky Doo" later in the episode. She makes brief appearances in Green Isn't Your Color at Fluttershy's fashion shows.

Lemony Gem makes several appearances in The Best Night Ever, attending the Grand Galloping Gala. In one shot during At the Gala, she appears as an Earth pony. Another shot later in the episode shows her cutie mark for the first time. In Sweet and Elite, Lemony Gem appears briefly during Becoming Popular (The Pony Everypony Should Know) in a checkerboard shot with numerous other ponies.

Lemony Gem appears in Princess Twilight Sparkle - Part 1 in the background alongside "Serena". In Canterlot Boutique, she appears very briefly during Rules of Rarity.

Lemony Gems appears throughout the My Little Pony: Friendship is Magic Issue #11 story Neigh Anything... She is shown to be one of Princess Cadance's friends during their time at Canterlot Academy. She, along with Diamond Rose, is also shown to be hopelessly infatuated with Buck Withers, the captain of the Academy polo team. Toward the end of Issue #11, when Buck asks Cadance to the Fall Formal Gala, Lemony Gems and Diamond Rose say yes for her, and Lemony Gems wonders if Buck has a brother.

In My Little Pony: Friendship is Magic Issue #12, she appears on cover A in a Canterlot Academy hallway with Princess Cadance, Diamond Rose, Buck Withers, Shining Armor, Sprinkle Medley, and Cherry Berry. She also appears in the issue's story Neigh Anything Part 2: Presentable in Periwinkle,[2] which gives her name as "Lemony Gems". Like in the prior issue, she and Diamond Rose express how lucky Cadance is to be going to the Fall Formal Gala with Buck Withers. When Cadance tells them she'd rather go to the Gala with Shining Armor, they agree to help her win his heart, if only because it means Buck will be available. At the end of the issue, when the story shifts back to the present day, Lemony Gems and Buck Withers are shown to be in a relationship.

Lemony Gem is a playable character in Gameloft's mobile game. Her in-game description states, "Lemony Gem is a go-getter and a stylish, self-assured sweetheart who's up for adventure! This rare-as-rubies Unicorn sure is a cut above the rest!"

A Playful Pony brushable of Lemony Gem is included in the Friendship Is Magic Favorite Collection Featuring Nightmare Moon toy set, which is the origin of her name. The back of the toy set's packaging lists Lemony Gem's name with a trademark symbol and shows her mane and tail style as being the same as Rarity's.

"Cadance! Come on, we'll be late for "History of Equestria"!"
— Friendship is Magic Issue #11 page 4

Princess Cadance: Look at it this way... With Buck back on the market, one of you can have him.
Lemony Gem: ...Shining Armor it is!
Diamond Rose: We'll do everything we can to get you two together!
— Friendship is Magic Issue #12 page 9

"If she makes that 'diamond in the rough' joke one more time, I swear..."
— Enterplay collectible card game Gen Con Indy 2013 demo card of Diamond Mint

"If I hear that 'diamond in the rough' joke one more time, I swear..."
— Enterplay collectible card game α #55 C card of Mint Jewelup

"Hey, watch the horn! Popping balloons is one thing, but you could hurt somepony!"
— Enterplay collectible card game α #47 R and α #ƒ20 cards of Pinprick

"Wait, is that Rainbow Dash? Is she dressing in style?!"
— Enterplay collectible card game The Crystal Games #100 U card Fashion Upgrade

"Is that a cow bathing in a lake of milk?"
— Enterplay collectible card game Absolute Discord #18 U card of Bessie

"Remember that time she Pinned the Tail on Mint Jewelup? Priceless!"
— Enterplay collectible card game Marks in Time #29 U card of Party Filly

"Wow, is that Rainbowshine? Where has SHE been all this time?"
— Enterplay collectible card game Defenders of Equestria #76 U card of Rainbowshine 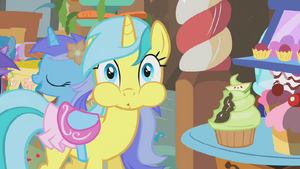