Lesson Zero is the third episode of the second season of My Little Pony Friendship is Magic and the twenty-ninth episode overall.

The episode is the first to use the remastered theme song.[2] It is the first episode of the series' second production span, which includes all of season two except for the first two episodes.

The episode was #7 in the We Heart Ponies Fan Favorite Mare-a-thon, in the leadup to Hearts and Hooves Day.

Twilight Sparkle, Rarity, and Princess Celestia have new colors for their magical horn glow in this episode. Twilight's magic glow color has changed from purple to light raspberry, Rarity's from blue to vivid blue, and Princess Celestia's from light blue to gold. The new glow colors more closely match the colors of the characters' cutie marks, instead of using their eye color, as has been done in previous episodes.

The episode starts off with Twilight and Spike walking through Ponyville, collecting items on a checklist for a picnic. Twilight goes to pick up her order of cupcakes and finds out that Mrs. Cake added one extra cupcake whose icing was touching another cupcake's icing. Worried that her friends might get jealous of whoever gets the cupcake with the "extra" icing, Twilight hastily tries to "fix" the icing problem, leaving only a tiny amount of icing on each cupcake. Spike is left covered in frosting, which he licks off. Afterwards, they head home to Golden Oak Library, with their checklist complete. Spike points out that Twilight has not written a letter to Princess Celestia this week, causing the unicorn to panic.

"Bad? BAD? Of course it's bad! I'm supposed to send Princess Celestia a letter every week, telling her about a lesson I've learned about friendship! Not every other week, not every 10 days, every single week!"
— Twilight Sparkle

Twilight checks her calendar and finds out it has been exactly one week since her last letter to the Princess, and is terrified of the possibility of being tardy. In a state of extreme anxiety, Twilight speculates that the Princess could punish her with an exam to prove she has been taking her studies seriously, which Twilight fears she would fail, prompting the Princess to send her back to Magic Kindergarten. Twilight envisions herself sitting in a classroom surrounded by mocking fillies, but the thought is 'popped' by Spike as he reasons that the Princess would never allow such a thing to happen. Ignoring her assistant's words of wisdom, Twilight becomes determined to solve a friendship problem and have a letter written to Princess Celestia before sundown. She first drills Spike on his problems, but when he is revealed to have none, Twilight goes out to find a friend in need. An exasperated Spike groans and states, "This won't end well."

Off to find a problem

While looking around Ponyville, Twilight overhears Rarity crying at her shop, having lost some diamond ribbon she requires for a dress. Before Twilight can help her, however, Rarity finds the ribbon she needed, much to Twilight's disappointment. While searching for her other friends, Twilight finds Rainbow Dash, destroying an old barn on Sweet Apple Acres. Twilight, thinking that Rainbow Dash and Applejack are fighting with each other, stops Rainbow Dash. However, Rainbow Dash informs Twilight that Applejack asked her to destroy the old barn to make room for a new one, which Applejack confirms before Dash finishes off the demolition by diving into the barn and creating a colorful mushroom cloud explosion.

Still determined to find a problem, Twilight decides to visit Fluttershy. However, when arriving at her cottage, Twilight sees Fluttershy fighting a bear and decides to back off, exclaiming, "Of all the days she had to stop being such a scaredy-pony, she had to pick today?!" As Twilight leaves in despair, it is revealed that Fluttershy was actually aiding the bear with a tense shoulder and giving it a massage.

Twilight, growing more worried and rapidly becoming unhinged, starts to tearfully talk to her own reflection in a puddle, adopting two separate tones, one terrified that she will not make the deadline, the other insisting that it is still possible to solve a problem in time. She starts hallucinating small filly ponies laughing at her before Spike intervenes, revealing that the "laughing ponies" are just some fillies innocently playing jump rope nearby. Spike then reminds Twilight about the picnic and she heads off to meet up with her friends.

A very agitated and slightly crazed Twilight arrives at the picnic and explains to her friends that she needs them to help her find a lesson about friendship to write about to Princess Celestia. The other five ponies brush off her issue as nothing, laughing and claiming Twilight has nothing to worry about, and she angrily runs away to continue her search for a problem.

With the sun about to set, Twilight, now sporting a disheveled mane and an insane-looking grin, decides the only option left is to create a problem so she can solve it. She spots the Cutie Mark Crusaders playing with a ball, which begins growing until it pops with Twilight inside it, a visual gag added by Raven M. Molisee.[3] Twilight approaches the Crusaders to try and get them to take her old toy, Smarty Pants, in the hopes that the fillies will argue over who gets to play with it first. When they instead react negatively to the doll, she casts a "want it, need it" spell on it, making the Crusaders want the toy so badly they resort to physical blows. She tries to break up the fight, but is unable to. She asks Big McIntosh, who is passing by, to get the doll. However, upon easily retrieving it, he too falls under the spell and runs away with the doll. Eventually, nearly all of Ponyville falls for the spell and begins to fight over the doll. The sun finally sets as Princess Celestia intervenes to undo her student's spell, returning all of the ponies to normal. She sternly instructs Twilight to meet her at the library before leaving. Twilight tearfully bids farewell to her friends, who realize they may never see her again.

Apology to the Princess

Once in the library, Twilight explains her actions to Princess Celestia while Spike overhears. Princess Celestia shows her immense faith in her student, and says that she does not require a letter every week. Twilight's friends barge in and plead for the Princess to be merciful to her student: they admit that they were wrong for denying Twilight's help when she needed it most, and they apologize. In lieu of a punishment for Twilight, Princess Celestia requests that all of Twilight's friends write her letters about friendship from now on, but only when they actually find one. Before she leaves, she tells Twilight that Spike made her aware of Twilight's fears getting the best of her, and after she leaves, Twilight gives Spike a loving hug.

"From this day forth, I would like you all to report to me your findings on the magic of friendship, when, and only when, you happen to discover them. "
— Princess Celestia

The episode ends with all the ponies, as well as Spike, offering a collaborative report, showing that they learned about taking a friend's worries seriously, even if it does not seem so, and not letting problems go out of proportion in order to fix them.

Twilight Sparkle: She's my teacher. Do you know what teachers do to students who don't pass? They send them back a grade! But she won't just send me back a grade. She'll send me back to... magic kindergarten.

[repeated line]
Rarity: Of all the worst things that could happen, this is the! Worst! Possible! Thing!

Twilight Sparkle: [Watching Rainbow Dash destroy barn] Rainbow must be angry with Applejack! She must hate her guts. How wonderful!

Twilight Sparkle: It's fine. It'll all be fine. The day isn't over yet. But it will be over soon! [groans] It'll be all over! My time in Ponyville! My advanced studies! No, no. You're a good student. You can do this. Ooh! But what if I can't? You can. You just have to keep it together. Keep. It. Together!

Sweetie Belle: [Looking at Smarty Pants doll] I really like her... mane?

Twilight Sparkle: I'd hate to cause a rift between such good friends.

Princess Celestia: Meet me in the Library.

Rarity: Of all the worst things that could happen, this is the! Worst! Possible! Thing!
Rainbow Dash, Pinkie Pie, Fluttershy and Applejack: [giving her a dirty look]
Rarity: What? I really mean it this time! 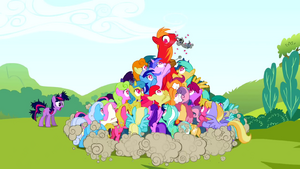