Liev Schreiber is an American actor, director, screenwriter, and producer. He provides the voice of the Storm King in the feature film My Little Pony The Movie.

Schreiber's involvement in the film was first announced by The Hollywood Reporter in May 2016.[1] In interviews on Jimmy Kimmel Live! and The Today Show, Schreiber has joked about playing "the evil monster who eviscerates all the little ponies"[2] and his history of being cast as villains in film,[3] calling the Storm King "one of the more intense characters [he's] ever played".[4]

Outside My Little Pony, Schreiber is an accomplished actor of film and stage, having performed in several Broadway productions. His breakout role was as Cotton Weary in the Scream trilogy of horror films. He was later cast as young Orson Welles in the HBO original movie RKO 281, for which he was nominated for Emmy and Golden Globe awards. Among Schreiber's other supporting roles in studio films include the 1996 remake of Ransom, The Hurricane, A Walk on the Moon, the 2000 movie version of Hamlet, The Sum of All Fears, and the 2004 remake of The Manchurian Candidate. He is also well-known for portraying the mutant supervillain Victor Creed / Sabretooth in X-Men Origins: Wolverine.

In theater, Schreiber played the title roles in a December 1999 revival of Hamlet, a 2003 Central Park production of Henry V, and 2006 Delacorte Theater productions of Macbeth, all to raving reviews. In 2005, he played Richard Roma in the Broadway revival of Glengarry Glen Ross, which won him a Tony Award for "Best Performance by a Featured Actor in a Play".

In television, Schreiber has starred in CSI: Crime Scene Investigation, Independent Lens, and BoJack Horseman. Since 2013, he has portrayed the title character in the Showtime drama series Ray Donovan.

In other voiceover, Schreiber plays Spots in Isle of Dogs and the supervillain Wilson Fisk / Kingpin in Spider-Man: Into the Spider-Verse. 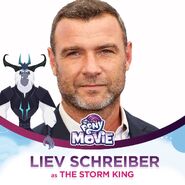