Lightning Dust is a female Pegasus pony who first appears in the episode Wonderbolts Academy and makes subsequent appearances in later episodes, IDW comics, and magazines. Her cutie mark usually consists of a lightning bolt and three stars. She leaves a blue and yellow thunderbolt streak behind her when she flies, similar to Rainbow Dash's rainbow streak and the Wonderbolts' trail of lightning clouds. She is called Lighting Dust in The Elements of Harmony Vol. II guidebook.

Lightning Dust was scripted as a wingpony at the end of Wonderbolts Academy.[1]

The original Wonderbolts Academy script included a final scene where Lightning Dust acknowledges that she was out of control.[1]

According to the My Little Pony Equestria Girls: Friendship Games DVD/Blu-ray audio commentary, Lightning Dust was originally going to appear in film, but she was replaced by Indigo Zap.

On Twitter in mid-December 2015, the day after My Little Pony: Friendship is Magic Issue #37 concluded Siege of the Crystal Empire, IDW comics writer Jeremy Whitley was asked, "Was there meant to be more done with Flim, Flam, Iron Will, and Lightning Dust that got cut? They just kinda...disappeared.", and replied, "I'd actually like to do a ff[sic] with LD and IW. I stand by Flim and Flam as unrepentant opportunists".[2]

On Twitter on August 4, 2018, between the magazine​[​specify​]​ comic Super Sub! and The Washouts, Jim Miller was asked, "is Lightning Dust capable of being reformed into a protagonist", and answered, "I’m sure if that’s a story a writer wanted to tell, we could make it work."[3] On Twitter in mid-September 2018, Nick Confalone was asked, "Now that Lightning Dust has most likely ended up in a full body wing & hoof cast via rocket explosion will The Washouts take safety regulations seriously for future shows now!?😅😋", and answered, "Never! Lightning Dust don't need no 'redemption.' She got a steady gig doing what she loves with adoring fans all over Equestria. Girl's true calling brought her a ragtag rad-rad bunch of friends and teammates. LD = too big a bamf for a kids show to handle so how bout Safety LAST".[4]

In Wonderbolts Academy, Lightning Dust appears as a cadet at the Wonderbolt Academy who quickly forms a friendship with Rainbow Dash. However, she ignores Rainbow Dash's injury during an academy team exercise and brushes off the fact that her tornado put Rainbow Dash's friends in danger. Her recklessness and utter disregard for the safety of others eventually lead to her being kicked out of the academy and her team leader status being given to Rainbow Dash.

Lightning Dust is mentioned by Scootaloo in Parental Glideance. She also appears in the same episode as a filly in flashback.

In the season eight episode The Washouts, Lightning Dust reappears as the leader and founder of the Washouts, a professional stunt team comprised of fellow ex-Wonderbolts. She and her team members do away with many of the Wonderbolts' safety regulations and perform far more death-defying stunts. Lightning Dust briefly recruits Scootaloo into the Washouts, intending to have her perform an extremely dangerous stunt (in spite of her growing protests) but Rainbow Dash intervenes before she gets seriously hurt during her debut. When Lightning Dust's hoof gets caught on a rope attached to Scootaloo's stunt rocket as it takes off into the sky, she is dragged along with it. As she is pulled into the sky, she declares that she and Rainbow Dash are "rivals for life".

In My Little Pony: Friendship is Magic Issue #8, Lightning Dust appears on cover A and page 16, in both appearances behind Princess Luna and multiple other characters in Ponyville. On My Little Pony Micro-Series Issue #7 page 19, Lightning Dust appears at the Ponyville Flea Market. She also appears in My Little Pony: Friendship is Magic Issue #34 being recruited by Radiant Hope to attack the Crystal Empire. During the attack, she antagonizes Rainbow Dash and Rarity with water balloons, but she is eventually captured. King Sombra frees her in Issue #35, and she and the other recruited villains defeat the Mane Six, but she harbors second thoughts about her actions by Issue #36.

Lightning Dust is mentioned in the chapter books Applejack and the Honest-to-Goodness Switcheroo and Fluttershy and the Fine Furry Friends Fair.

In the Signature My Little Pony magazine issue 69 comic Daring friends and the missing story!, Lightning Dust appears at the Canterlot Magic Fair.[5] In the​[​specify​]​ comic Just the ticket!, she gets Songbird Serenade tickets from Ponyville and refuses Rainbow Dash's flying-race challenge at the Crystal Empire. In the​[​specify​]​ comic Super Sub!, set between Rainbow Dash's promotion to full Wonderbolt and Thunderlane's promotion to full Wonderbolt, she is one of the "new recruits at Wonderbolts Academy" whom Rainbow Dash helps train.

A mini-figure toy of Lightning Dust has been displayed at the 2014 American International Toy Fair.[6]

On pages 20-21 of the book Winning Style, "Rainbow Dash and Lightning Dust can't wait for the flying competition at the Equestria Games. They work on their speed and agility while flying through the clouds."[7]

In a Signature My Little Pony magazine issue's​[​specify​]​ Guess who’s coming for dinner?, Lightning Dust—stated to have a Cutie Mark of "a thunderbot[sic] and stars"—is joining Rainbow, Gilda and Tank as "[a]nother flying friend" guest for spaghetti.[9]

LIGHTING[sic] DUST is a highly competitive flyer and Rainbow Dash's good friend. She flies recklessly, and doesn't always see how her actions will affect other ponies. She might have an even bigger ego about her flying than Rainbow Dash, and was actually removed from her leadership role in the Wonderbolts because of it.

Lightning Dust is shown to be a vigorous and highly competitive flyer who loves to test her limits. She has strong attitude, speed, and love for flying. However, because of her competitive spirit, she is also very reckless and shows little concern for anyone who becomes a victim of her actions. She also appears to have a bigger ego than Rainbow Dash.

During the comics storyline Siege of the Crystal Empire, Lightning Dust is shown to be deeply resentful of Rainbow Dash, blaming Rainbow for her getting kicked out of the Academy. She joins Radiant Hope after being offered the chance to prove once and for all that she's better than Rainbow Dash. However, she starts having second thoughts after King Sombra takes over the Crystal Empire, and leaves soon after, unwilling to continue playing a part in the proceedings.

In Just the ticket!, Lightning Dust openly doubts that she would win a flying race against Rainbow Dash.

In The Washouts, Lightning Dust claims to have acknowledged that she went too far during Wonderbolts training, but quickly proves that she has learned nothing from her dismissal, having no qualms over endangering Scootaloo's life during a performance. She also enjoys mocking Rainbow Dash by claiming Scootaloo "used" to respect her.

"Let me show you what I've got, ma'am."
— To Spitfire, Wonderbolts Academy

"Ma'am, can you put the Dizzitron on maximum speed? I wanna push my limits."
— To Spitfire, Wonderbolts Academy

"Hey, you snooze, you lose! Besides, Wonderbolts are supposed to be able to recover from a spinout. You saw them on the Dizzitron. They could use the practice. I mean, it's not our fault we're so much better than those other guys. Not every pony is destined to become a Wonderbolt. Only the best of the best, right?"
— To Rainbow Dash, Wonderbolts Academy

"Kicking all that tail has made me hungry."
— Wonderbolts Academy

"RIVALS FOR LIFE!!"
— To Rainbow Dash, The Washouts

"You know, I outraced Rainbow Dash at every turn. I just had the guts to do what needed to be done to win and she cared more about making friends. Why does a Wonderbolt need friends? I should be a Wonderbolt right now and she should be the one sitting here."
— To Midge, My Little Pony: Friendship is Magic Issue #34

"Ha! There’s only one Pegasus that’s even fast enough to get near me!"
— My Little Pony: Friendship is Magic Issue #34

"There’s no way we'd give you our tickets! And you’ll beat us anyway."
— To Rainbow Dash, Just the ticket!

"I was out of control up there. You did what you were supposed to do-- Let somepony know about it."
— To Rainbow Dash, Wonderbolts Academy script[1] 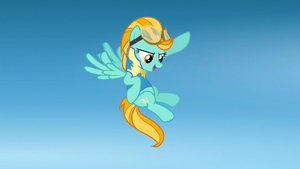