Lily Valley, called simply Lily in the show and some other materials, is a female Earth pony with a grayish raspberry coat, light amber mane with pale amber highlights, grayish gold eyes, and a cutie mark of three lilies. She is almost always seen with a lily in her mane. She has speaking roles in Applebuck Season, Bridle Gossip, The Cutie Pox, A Friend in Deed, Slice of Life, and It Isn't the Mane Thing About You.

Lily Valley is a recurring background pony, usually appearing alongside fellow flower ponies Daisy and Rose. Her appearances typically depict her panicking over a disaster that affects Ponyville or its residents.

Her first series appearance and spoken lines are in Applebuck Season; she faints in the face of the bunny stampede and laments the loss of her garden. In Bridle Gossip, she panics over Twilight Sparkle and her friends' post-poison joke appearances and runs inside the flower shop with Daisy.

In The Cutie Pox, she appears again with Daisy and Rose, believing the titular disease afflicting Apple Bloom to be a curse and fleeing for safety after Spike's less than subtle explanation. Her voice in this episode is not as high-pitched as it is in previous appearances.

She appears in Apple Bloom's imagined apocalyptic Ponyville in Hearts and Hooves Day, emaciated and wearing a dunce hat. In A Friend in Deed, she appears next to Daisy as Pinkie Pie addresses a crowd concerning Cranky Doodle Donkey's need for a toupee.

In Putting Your Hoof Down, she and Rose are shown in attendance of Iron Will's assertiveness seminar, stepping aside to reveal Fluttershy when Iron Will beckons her to the stage. In Ponyville Confidential, she appears reading a copy of the Foal Free Press across from Berryshine.

In One Bad Apple, Lily Valley appears with no lily in her mane. She is seen in a crowd at the Summer Harvest Parade, holding a pennant.

In Pinkie Pride, Lily Valley watches the goof-off between Pinkie Pie and Cheese Sandwich. In Leap of Faith, she appears during Flim and Flam's sales pitch.

In Slice of Life, Lily Valley appears with extended dialogue outside the Ponyville flower shop aside Daisy, Rose, and Derpy. In Brotherhooves Social, she watches the Sisterhooves Social. In The One Where Pinkie Pie Knows, she appears alongside Goldengrape and Daisy in front of Sugarcube Corner. She also appears in the final group shot during Friends Are Always There For You in The Cutie Re-Mark - Part 2.

In season seven, Lily Valley appears at the Ponyville market in Rock Solid Friendship and watches the Wonderbolts' performance in Parental Glideance. At the beginning of Not Asking for Trouble, she appears walking in front of Sugarcube Corner with Piña Colada before hearing Pinkie Pie's exclamation. In Discordant Harmony, she makes a background appearance talking to Derpy in front of the Ponyville joke shop. In Triple Threat, she makes a background appearance talking to the other Flower Ponies in Ponyville. In It Isn't the Mane Thing About You, she runs the flower stand with the other Flower Ponies and has several speaking roles.

In School Daze - Part 1, Lily Valley makes a cameo appearance attending Friends and Family Day at the School of Friendship. In The Maud Couple, she appears attending Maud Pie's birthday in front of Ponyville Town Hall. In Non-Compete Clause, she makes a background appearance walking in the courtyard at the School of Friendship with Daisy. In The Break Up Break Down, she occupyies a table at the Ponyville Café with Rose during Hearts and Hooves Day. In Marks for Effort, she makes a cameo appearance walking through Ponyville with Thorn. In Yakity-Sax, she appears at a park picnic table in Ponyville with Berryshine and Noteworthy before dispersing upon hearing Pinkie Pie's poor yovidaphone playing and later appears in Canterlot watching the Wonderbolts' show where she covers her hears after again hearing Pinkie Pie's poor playing. In The Washouts, she appears in the audience for each of the titular groups's two shows in Ponyville.

In the hour-long special My Little Pony Best Gift Ever, Lily Valley appears wrapping gifts with Daisy and Rose during One More Day.

In The Beginning of the End - Part 2, Lily Valley makes a background appearance as one of King Sombra's mind-controlled slaves as he attacks Canterlot. In Common Ground, she appears during the opening newsflash as a buckball fan doing the wave. In She's All Yak, she makes appears in a reused group shot from "The Cutie re-Mark - Part 2" during Fit Right In. In Student Counsel, she makes a background appearance sitting in Ponyville with Royal Riff. In 2, 4, 6, Greaaat, she appears in the audience for the buckball game between the School of Friendship and the School of Magic and also spectates the halftime cheerleading routine. In A Trivial Pursuit, she and the other flower ponies occupy a table spectating Trivia Trot. In The Summer Sun Setback, she appears in the stands for the final Summer Sun Celebration in Canterlot. In She Talks to Angel, she makes a cameo appearance walking through Ponyville and watches as Angel in Fluttershy's body hops around clumsily. In Dragon Dropped, she and Daisy appear talking together at a stand outside Sugarcube Corner. In A Horse Shoe-In, she appears in the audience for Octavia Melody's concert with DJ Pon-3. In Growing Up is Hard to Do, she appears talking to Noteworthy in Ponyville as the Cutie Mark Crusaders turned into adults run by and later as a passenger inside the Friendship Express with Golden Harvest during Being Big is All It Takes. In The Big Mac Question, she appears in Ponyville with an unnamed filly hearing Discord's echo, and they subsequently appear together at the Ponyville marketplace. She later appears in the marketplace holding a cherry pie in which one of Discord's living apples jumps in, scaring her away. In The Ending of the End - Part 2, she appears in the crowd of earth ponies in Ponyville as they isolate themselves from the Pegasi and Unicorns.

Times stated below are approximate and taken from various videos.

Appearances with Daisy and Rose

The three appear together in Applebuck Season, Bridle Gossip, and The Cutie Pox. In Applebuck Season, they react during and to the aftermath of the bunny stampede. In Bridle Gossip, they react to Zecora entering town with the main characters. In The Cutie Pox, they react to Apple Bloom's strange symptoms, letting out sighs of relief when Spike dismisses their claims of the cause. Rose and Daisy appear in The Super Speedy Cider Squeezy 6000 at different places in the cider queue. In Apple Bloom's imagined apocalyptic Ponyville in Hearts and Hooves Day, an emaciated Lily Valley runs around in a panic wearing a dunce hat, while Rose cries out in despair atop a roof, next to Berryshine. In A Friend in Deed, all three of them appear briefly in the crowd Pinkie Pie addresses concerning Cranky Doodle Donkey's need for a toupee. All three ponies appear in Putting Your Hoof Down at Iron Will's motivational seminar. The three appear again briefly reading the paper, but Rose can be seen only briefly since it zooms past her. Daisy and Lily Valley appear in One Bad Apple. In Slice of Life, they react to news that they need to put flower arrangements for Cranky Doodle Donkey and Matilda's wedding a day early, and later when they see a zinnia with its stem snapped. The flower ponies appear selling flowers for Mares' Day in It Isn't the Mane Thing About You, one of the few times they do not overreact to anything.

Lily Valley is a playable character in Gameloft's mobile game. Her in-game description states, "Friends with fellow flower ponies Daisy and Rose, Lily always has a lily in her mane and a smile on her face."

A partially translucent Lily Valley mini-figure toy, which uses the Applejack mold but features the show character's color scheme and cutie mark, was leaked in early August 2012,[2] and its corresponding collector card was leaked in late November 2012; the toy and card were released as part of the seventh wave of mystery packs in January 2013.[3] According to the card, "LILY VALLEY loves to be in the center of the action!" Her name comes both from the card and from the packaging of the wave, which each list the name with a trademark symbol. A mystery pack wave 7 image formerly displayed by a mystery pack listing on the website of the Greek company KAPSIS depicts Lily Valley, referred to as simply Lily, with the same design as in the show.[4]

A second Lily Valley mini-figure toy and collector card pair was released in November 2013 as part of the ninth wave of mystery packs, which also list her name with a trademark symbol. Here, she is depicted as a Pegasus using the Rainbow Dash design,[5][6] unlike her other appearances. This collector card depicts her with a lily in her mane, and uses the same description as the previous collector card.

A brushable toy of Lily Valley was leaked in early 2015.

Lily Valley, along with Rarity, appears on the back of a customized iPad.[7]

Rose: The horror... the horror...
Lily Valley: It was awful.
Daisy: A disaster. A horrible, horrible disaster.

Lily Valley: Our gardens, destroyed.
Rose: Every last flower, devoured.
Daisy: By... by... them!

Daisy: Look Rose! How awful!
Rose: The wicked enchantress has cursed them all.
Lily Valley: The horror! The horror!

Lily Valley: You want Matilda's arrangements... today?!
Daisy: This is awful!
Rose: The horror, the horror!

Lily Valley: We don't even have Matilda's flowers in yet, much less arranged! [gasps] This is a disaster!

Lily Valley: [gasps] Look, girls! A broken stem on one of the zinnias!
Daisy: Whaaat?!
Rose: Oh, the horror, the horror!

"Calamity! Disaster! It's the end of Equestria as we know it! HELP!!!"
— Enterplay collectible card game Canterlot Nights expansion set card #43 U of Lily[8] 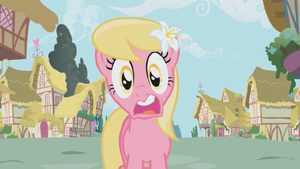