Limestone Pie and Marble Pie are female Earth ponies and members of the Pie family. They are Pinkie Pie's oldest and youngest sisters respectively. They first appear as fillies in a flashback in The Cutie Mark Chronicles before debuting as fully grown mares in present day in the chapter book Pinkie Pie and the Rockin' Ponypalooza Party! and the season five episode Hearthbreakers.

According to author G.M. Berrow, she named Pinkie's sisters Marble and Limestone so that they and Pinkie would have the initials "MLP", which is short for "My Little Pony".[1]

When asked on Twitter if Pinkie and Marble are twins, Hearthbreakers writer Nick Confalone replied "it comes down to your definition of twins for non-humans"[2] and "Marble/Pinkie not identical twins, if they were I'd call them twins."[3] Characters who have been referred to as twins include Pound Cake and Pumpkin Cake, Flim and Flam, Cheerilee and Cherry Blossom, Tofu and Tempeh, Antonio and Francesco, and Aloe and Lotus Blossom.

Limestone and Marble appear in a picture with the rest of the Pie family in Pinkie Pride.

Limestone and Marble appear as grown mares in Hearthbreakers when the Apple family and Pie family spend Hearth's Warming Eve together. Here, Limestone is depicted as very aggressive, acting as the primary caretaker of the rock farm. She is especially protective of Holder's Boulder, a large sacred boulder on the farm. Marble, on the other hand, is depicted as very shy and soft-spoken, often letting Pinkie speak on her behalf. She doesn't say anything other than "Mm-hmm", a characteristic similar to the equally laconic Big McIntosh, with whom she forms a friendship.

Marble and Limestone are mentioned collectively by Pinkie Pie on The Gift of the Maud Pie, explaining to Rarity how Pinkie meets with each of her sisters in various locations around Equestria for gift swap meets.

Limestone and Marble appear in The Maud Couple, when Pinkie returns to the family rock farm after being unable to accept Maud's new boyfriend, Mudbriar. While Limestone is initially jealous to hear that Maud has a boyfriend, she (with a little prompting from Marble) convinces Pinkie that Maud sees something good in Mudbriar, and that he makes her happy, which is what really matters.

In the holiday special My Little Pony Best Gift Ever, Limestone and Marble appear celebrating Hearth's Warming Eve with their and Applejack's families. During One More Day, Limestone pushes a large gift boulder across the Apple family's living room, and Marble witnesses Big Mac kiss Sugar Belle under the mistletoe, becoming saddened by the sight of it. Limestone and Marble later discuss with Pinkie about what gift she should get for Twilight Sparkle. They are last seen during The True Gift of Gifting, making their traditional Hearth's Warming dolls out of rocks alongside Maud, Mudbriar, and Apple Bloom.

In The Last Problem, Limestone and Marble briefly appear in Pinkie Pie's group shot during The Magic of Friendship Grows.

Limestone is often very grumpy and commanding, but also protective of her sisters. Conversely, Marble is a pony of very few words, and her sisters often do the talking on her behalf.

When Pinkie reveals that Maud has a boyfriend in The Maud Couple, Limestone awkwardly (and without being asked) claims that she's not jealous. She also displays a level of insight, telling Pinkie that Mudbriar is like a geode, with a beauty beneath the drab surface that Maud recognizes.

In the same episode, Marble shows a more forceful side to her, glaring at Limestone when she fails to recognize Pinkie's despair, and convincing her to call a work break to comfort Pinkie with a single look.

In My Little Pony: Friends Forever Issue #9, Limestone, Marble, and their parents appear in present day on page 3.

Of My Little Pony: Friendship is Magic Issue #39, Marble appears in present day with Big Mac on the Jetpack Comics cover, which was only available at PonyCon in New York.

Limestone and Marble appear on page 24 of the My Little Pony Holiday Special 2017 comic.

In Pinkie Pie and the Rockin' Ponypalooza Party!, Limestone and Marble visit Pinkie Pie in Ponyville. They and their parents appeal to Twilight Sparkle for help in saving their rock farm, which they are in danger of losing due to rivaling businesses. As part of her plan to save the rock farm, Pinkie Pie suggests a big rock concert, and she puts Limestone and Marble in charge of decorations. Though the two have minor dialogue, they are described as having an "unspoken language that consisted mostly of blinks and nods."

In A Perfectly Pinkie Present!, Limestone and Marble appear on page 3.

LIMESTONE PIE is Pinkie Pie's oldest sister, and the family business is her passion. She isn't afraid to speak her mind if she must.

MARBLE PIE is Pinkie Pie's baby sister and the demure pony of the family. She prefers to let her older siblings do all the talking.

"Gaze into the eyes of Limestone Pie. Ma and Pa may own this rock farm, but I keep it running."
— Limestone Pie, Hearthbreakers

"What. Happened. To. My. Farm?!"
— Limestone Pie, Hearthbreakers

"Well, don't just stand there! We got a boulder to move! And I'm in charge."
— Limestone Pie, Hearthbreakers

"I'm not jealous! Who said anything about jealous?!"
— Limestone Pie, The Maud Couple

"You see Mudbriar as a rock, but Maud sees him as a gem. Even if you never see past his dullness, you can see how happy he makes Maud. And to a sister, that's all that matters."
— Limestone Pie, to Pinkie Pie, The Maud Couple

"It's the gems!"
— Limestone Pie, Pinkie Pie and the Rockin' Ponypalooza Party!

"Well, you tell that to the rest of Equestria. We haven't had any business for months!"
— Marble Pie, Pinkie Pie and the Rockin' Ponypalooza Party! 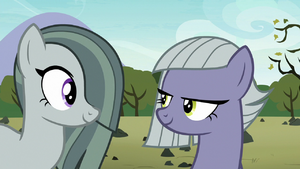