Little Strongheart is a young female buffalo who first appears in Over a Barrel. Her name is in the style of a traditional Native American name, and her feathered headband is also part of the Native American motif shared among the buffalo herd.

Little Strongheart is first seen assisting her herd in hijacking a train car containing Bloomberg and Spike. Rainbow Dash attempts to confront her as she runs on top of the train, but Little Strongheart manages to avoid with somersaults and weaves past her. Eventually, Rainbow Dash gets too caught up in the chase and crashes into a railroad post.

Little Strongheart is seen again at the Buffalo village. She apologizes to Rainbow Dash for her actions during the heist, justifying the tree-napping as an attempt to reclaim her herd's stampeding grounds, which the ponies of Appleloosa have claimed as an orchard. Her explanation convinces Rainbow Dash to join the herd's cause.

Her attitude towards Braeburn in their first meeting is very conciliatory, but Applejack and Rainbow Dash start an argument, preventing any agreement. After a fight between the townsfolk and the buffalo, an agreement is finally made. The herd stampedes away, with Little Strongheart bidding her new friends goodbye.

Little Strongheart makes a brief cameo at the beginning of Pinkie Pride during the party Cheese Sandwich throws for the ponies and buffalo in Appleloosa.

In The Ending of the End - Part 2, Little Strongheart takes part in the final battle against Queen Chrysalis, Lord Tirek, and Cozy Glow. In The Last Problem, she briefly appears in Applejack's group shot during The Magic of Friendship Grows.

In My Little Pony: Friendship is Magic Issue #62, Little Strongheart appears depicted in painting on page 6.

Little Strongheart is a character in Gameloft's mobile game. Her in-game description states, "The kind-hearted daughter of Chief Thunderhooves, this buffalo gal's got some real nimble moves!"

Little Strongheart is a levelheaded buffalo, serving as the voice of reason for the more short-tempered Chief Thunderhooves. She displays more kindness and patience toward the Appleloosans than her fellow buffalo, and she is the most opposed to the feud between her tribe and the ponies. 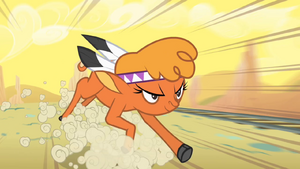