Liza Doolots is a background unicorn filly with a baby-blue coat, a lavender mane, and purple eyes. She usually appears engaging in activities with other foals in several episodes. She has appeared with many cutie marks throughout her appearances, including a purple horseshoe, a pink flower, an hourglass, and sometimes no cutie mark at all. Liza is unnamed in the show, but she is named in merchandise and other media.

The name "Liza Doolots" was made up and used for a comment by Gashcan 5 through the BBC's website in late 2004.[2][3] The name is a play on Eliza Doolittle, the main character of play Pygmalion and its musical adaptation My Fair Lady.

Liza Doolots appears several times in both season one and two as a speaking background filly, although she is often a crowd filler.

She first appears in Winter Wrap Up, in which she jumps up and down while singing the titular song with "Dinky Doo." In Call of the Cutie, Liza Doolots has a different cutie mark in each shot she appears in. She also appears in Green Isn't Your Color sometimes hornless with different mane and tail designs, in The Cutie Mark Chronicles, and in Lesson Zero in Twilight Sparkle's vision of magic kindergarten. In The Mysterious Mare Do Well, Liza appears (without a cutie mark) having a picnic with Amethyst Star. Later in the episode, she calls Rainbow Dash's lawn-mowing super-heroics "lame." In Hearts and Hooves Day, she drops a Hearts and Hooves Day card when she sees Twist give one to Truffle.

In season four, Liza Doolots appears in the classroom and on the train in Flight to the Finish. She also appears in Rainbow Falls, at Rainbow Dash's birth-iversary party in Pinkie Pride, among numerous other foals in Twilight Time, and in Twilight's Kingdom - Part 2.

Liza Doolots appears as one of Princess Celestia's School for Gifted Unicorns students in the first, second, third, and fifth episodes of Fundamentals of Magic.

In My Little Pony: Friendship is Magic Issue #47, Liza Doolots appears on pages 7–9 at Mayor Filthy Rich's unveiling of a new Ponyville playground.

Liza Doolots is a character in Gameloft's mobile game. The game's description of her states, "This filly is BUSY -- her schedule's just packed! (We think it's because she's so quick to distract.)"

In the Enterplay collectible card game's expansion set Canterlot Nights, Liza Doolots is named on her own card #92 C, which gives her the description "This filly loves chatting, hopping on one hoof, asking questions, hunting for critters, and enjoying a picnic (until she sees a butterfly that she must chase). The only thing[sic] Liza doesn't like are BIG MEANIES!"

"Lame."
— The Mysterious Mare Do Well 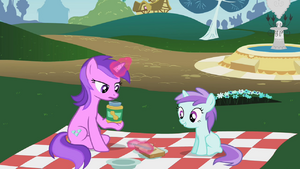