Look Before You Sleep

Look Before You Sleep is the eighth episode of the first season of My Little Pony Friendship is Magic. In this episode, Applejack and Rarity are forced to stay at the library where Twilight resides for the night due to a thunderstorm. Twilight takes this opportunity to drag them into having a slumber party. The title of the episode is a play on the saying look before you leap, meaning acting only after careful planning.

According to episode writer Charlotte Fullerton, this episode was originally titled Opposites Attack.[2]

Caught in the rain

The episode opens in a field outside the Golden Oak Library; several Pegasi are seen moving clouds into place to create a downpour. In preparation for this, trees are being pruned to avoid damaging the town. Rarity helps out, but her contribution to the cleanup effort involves making topiary out of the loose branches. This puts her at odds with Applejack, who insists on taking the branches down. When Rarity voices her disapproval of Applejack making a mess, rain starts to fall, much to Rarity's further displeasure.

Applejack suggests that Rarity use a bench to shield herself from the rain, but Rarity refuses out of an unwillingness to get her hooves muddy. As the two argue even more over their situation, the rain and wind pick up speed. Twilight Sparkle, noticing the two caught in the storm, offers them shelter in the library until the storm passes.

"'Slumber 101: All You Ever Wanted to Know About Slumber Parties But Were Afraid to Ask'."
— Rarity reading Twilight's book

With Spike away in Canterlot on royal business, Twilight is alone for the evening, and sees this as an opportunity to have her very first slumber party. Rarity and Applejack are far from eager to spend the entire evening in each other's company, but find themselves unable to leave due to the worsening storm. After a brief argument about mud masks, they agree to try and get along so they don't ruin Twilight's first sleepover.

Twilight is oblivious to Applejack and Rarity's silent bickering, checking off each game in her book as they're played. However, for each game played, the two grow more and more frustrated with each other.

During ghost stories, Rarity and Applejack suggest stories that allude to why they don't like each other before Twilight tells the legend of The Headless Horse, succeeding in scaring both of her friends. Applejack sickens Rarity by burping when they make s'mores. And in a game of Truth or Dare, Applejack and Rarity only dare each other to do humiliating things, such as Applejack daring Rarity to get her mane wet in the rain and Rarity daring Applejack to wear a gaudy, ridiculous outfit.

Twilight, now sensing conflict, tries to move things along. Unfortunately, the conflict comes to a head during the next game: a pillow fight, which in no time turns into an all-out pillow war between Rarity and Applejack. Caught in the middle and bombarded with pillows, Twilight suggests that they call it a night and go to bed.

Bickering in the bedroom

Applejack and Rarity's petty arguing continues even when the ponies try to go to bed. Exasperated by their constant back and forth, Twilight at last decides to intervene and voices how upset she is that her friends are fighting too much to have any fun, thereby ruining her slumber party. Just as Twilight asks if anything else could possibly go wrong, a nearby tree is hit by lightning and begins to topple towards a neighboring house.

Applejack, not heeding a warning from Rarity, lassos the falling tree and instead of stabilizing it, sends it crashing through Twilight's bedroom window. Rarity focuses on cleaning up the mess of books and Applejack tries to push the tree back out of the window while Twilight desperately searches through her slumber party book for a section on dealing with fallen trees in the middle of the bedroom.

When Applejack fails at moving the tree out on her own, she eventually apologizes to Rarity for criticizing her attention to detail and convinces her to focus on helping with the bigger task instead. She gets Rarity to not worry so much about getting her hooves dirty. Rarity uses her unicorn magic to turn the treetop into tiny bush sculptures, clearing the house at the cost of getting dirt all over herself. Applejack, at Rarity's insistence, proceeds to gently toss the broken tree trunk out of the window.

With the storm, and their differences, finally settled, Applejack, Rarity, and Twilight are finally able to have fun, rounding out the evening with a game of 20 Questions. Applejack and Rarity exchange apologies, and in the end, Twilight officially declares the slumber party a success, to her friends' delight.

In a letter to Princess Celestia, Twilight writes that it's possible to get along with someone very different from you if you embrace each other's differences. She proposes another slumber party the following night, and her proposal is met by two pillows thrown in her face. The episode closes as the sky clears up, revealing a bright sunny day.

Rarity: Then you place one marshmallow on the top of the chocolate and be sure it's centered -- that's critical -- and then carefully put another perfectly square graham cracker on the top. And done. Ta-da! [laugh]
Twilight Sparkle: Ooo!
Applejack: Nah, ya just eat 'em. [munch] Mmm-mmm! [belch]

Applejack: I'd like to tell ya'll the terrifying tale of the prissy ghost, who drove everypony crazy with her unnecessary neatness! OooooOOwwoOOO! I'm sure ya'll are familiar with that one?
Rarity: Never heard of it. But I have a much better one... It's the horrifying story of the messy inconsiderate ghost, who irritated everypony within a hundred miles! OoooooOOOwwwwOOOoo...

Rarity: (after getting hit in the face with a pillow) IT! IS! ON!

Applejack: Yeah, that's not gonna happen. Geronimo!
Rarity: You did that on purpose.
Applejack: Um, yeah.
Rarity: Get up so I can fix it again.
Applejack: Can't hear ya, I'm asleep. [fake snore]

Applejack: I'm mighty sorry, Twilight.
Twilight Sparkle: It's... Well, it's not okay. There's a giant tree branch in the middle of my bedroom, and the book doesn't say anything about having a giant tree branch at your slumber party. Or at least I haven't found that entry yet. Ooh... ah!

Twilight Sparkle: Well, they do have a section about backyard slumber parties. Is that what we're doing right now? Does this count as camping?

Twilight Sparkle: Oh, pretty! Where did these come from? They're not in the book either.

Applejack: Is it... a six-legged pony with a purple polka-dotted mane and shootin' stars comin' out of his eyes?
Rarity: Who flies through the air all over the world to hide magic, sparkly eggs?
Twilight Sparkle: That's it!
Applejack and Rarity: It is?
Twilight Sparkle: No. 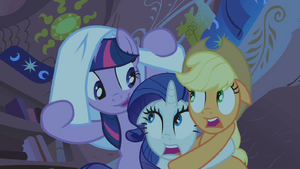 Look Before You Sleep image gallery