Luckette is a female Earth pony with a light purple coat, pale yellow mane and tail, gold eyes, and a cutie mark of two interlocking horseshoes. She is unnamed in the show, but she is named in merchandise. She has speaking roles in the season five episode Made in Manehattan and the season eight episode Fake It 'Til You Make It.

Luckette first appears in Power Ponies during a sweeping shot of Maretropolis. She later makes multiple appearances in Manehattan in Rarity Takes Manehattan, including a brief appearance as a Pegasus with a different cutie mark.

In Pinkie Pride, a filly Luckette appears in Cheese Sandwich's flashback during Cheese Confesses. In For Whom the Sweetie Belle Toils, Luckette makes a brief appearance as an award nominee in Sweetie Belle's dream. She later appears in Trade Ya! when Pinkie Pie auctions off Princess Twilight Sparkle's books, offering a Crystal Empire snow globe at one point.

Luckette also appears twice in Equestria Games in the Crystal Empire stadium for the titular event as Spike lights the cauldron and again walking across a street. In Twilight's Kingdom - Part 1, she appears in an audience and is surprised when Discord appears to help Lord Tirek drain the ponies of their magic.

Luckette appears at the Grand Equestria Pony Summit in Princess Spike. In Party Pooped, she appears as a passenger on the Friendship Express sitting with an unnamed stallion, and later appears talking to Royal Riff a the Equestrian Friendship party for the yaks in Ponyville. In Made in Manehattan, she appears in Manehattan crossing a street, and later has a speaking role later that evening telling Rivet about Midsummer Theatre Revival play and that the Method Mares are performing before watching the play.

In The Gift of the Maud Pie, Luckette makes various background appearances in Manehattan, often in the company of various other ponies. In The Saddle Row Review, she appears in flashbacks in Manehattan hearing Rarity's wailing, walks by the future site of Rarity For You with Sir Pony Moore, and as a customer for Rarity For You during its grand opening. While waiting in line for the store, she appears with darker cutie mark colors. In Viva Las Pegasus, she appears riding a ferris wheel with an unnamed stallion at Gladmane's resort in Las Pegasus.

Luckette has a speaking role in Fake It Til You Make It talking to Strawberry Ice while walking down a street in Manehattan, telling her of her planned busy shopping day and her low tolerance for bad shop ponies. In Grannies Gone Wild, she appears riding a ferris wheel with an unnamed mare in a Las Pegasus resort.

Luckette is depicted with the same design as Applejack and named in the eleventh wave of mystery pack toys and collector cards, the English-only version of which lists her name with a trademark symbol and states that she "brings good luck to everyone around her!" and the English/French/German/Spanish version of which states that she "brings everyone good luck!" A red-maned prototype version of the mini-figure has been displayed at the 2014 American International Toy Fair.[1]

Luckette appears on the season 4 poster.

"It's the Midsummer Theater Revival. The Method Mares are performing!"
— Made in Manehattan 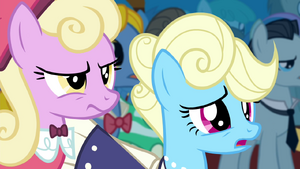