Lucky Clover, or Shamrock, is a male background Earth pony with a light gray coat, dark gray mane, and light blue eyes. His cutie mark, three four-leaf clovers, resembles that of a female G1 pony named Clover. He first appears in Winter Wrap Up, and has speaking roles in The Best Night Ever and A Canterlot Wedding - Part 1. The show does not name him, but he receives his name from merchandise, other media, and promotional material. Lucky Clover also shares his design with Dr. Hooves and Meadow Song, and shares his mane and tail style with Crescent Moon and Buddy.

Lucky Clover has background appearances in many episodes, as well as two speaking roles.

Lucky Clover appears as a background character several times in Winter Wrap Up as one of the ponies clearing snow. He appears a couple of times carrying snow away in a carriage in Ponyville. Lucky also appears several times manning a snowplow at Sweet Apple Acres. He later appears as a resident of Appleloosa in Over a Barrel.

In The Best Night Ever, a version of Lucky Clover appears with a light blue coat. He and Caramel are flattered by Rarity and convinced into pulling their carriage to the Grand Galloping Gala. Later on, when Spike tries to get them to walk faster, Lucky Clover angrily says to Spike, "If you weren't friends with our neighbor Rarity..." while shaking his hoof.

Lucky Clover appears twice as a judge in Sisterhooves Social, awarding a ribbon to Amethyst Star and Dinky Doo in the pie-eating contest and awarding a ribbon to Berryshine and Piña Colada in the final race. During the Wonderbolts Derby in Sweet and Elite, Lucky Clover serves as the flagpony, waving the checkered flag to both start the race and mark its end.

In A Canterlot Wedding - Part 1, during a flashback to Twilight Sparkle's childhood, Lucky Clover is seen in Canterlot arguing with Wild Fire. After Princess Cadance casts a love spell on them, they instantly stop arguing. Later in the same episode, he appears in the Canterlot Castle kitchen assisting Applejack.

Lucky Clover appears in Flight to the Finish in the crowd at the Crystal Empire Stadium. He also appears in Rainbow Falls as a pegasus. In Pinkie Pride, he is among the ponies partying in Appleloosa, the ponies singing about Pinkie Pie in Pinkie the Party Planner, the ponies welcoming Cheese Sandwich in The Super Duper Party Pony, and the ponies watching the Goof Off.

In Simple Ways, he is among the ponies outside Town Hall during the Ponyville Day's Pony of Ceremonies. In Filli Vanilli, he is among the ponies listening to The Pony Tones at Mayor Mare's ribbon-cutting ceremony, and at Sugarcube Corner when Fluttershy is revealed to have been singing behind the curtain. In It Ain't Easy Being Breezies, he is among the ponies outside Town Hall watching the breezies pass through Ponyville. In For Whom the Sweetie Belle Toils, he is in the lobby following the Cutie Mark Crusaders' play. In Leap of Faith, he is among the audience of ailed ponies singing during Flim Flam Miracle Curative Tonic, and at the pool. In Trade Ya!, he is seen walking around the Exchange, and is present at the trial at the end of the Exchange. In Inspiration Manifestation, he attends the Foal and Filly Fair.

In Equestria Games, he is part of the Ponyville delegation in the titular Games, and does pull-ups on a pair of still rings on the train on the way to the Crystal Empire. Later, he is seen both on the field during the opening ceremony as well as among the Games' spectators.

In Tanks for the Memories, Lucky Clover helps prepare Ponyville for winter, appearing as both a pegasus and an earth pony, briefly appearing with a different mane style when he is covered in snow from clouds that Rainbow Dash attempts to squeeze into a tree cavity. In Appleoosa's Most Wanted, he watches the Appleloosa Rodeo. In Party Pooped, he appears in Dodge Junction. In Do Princesses Dream of Magic Sheep?, he appears in Ponyville's shared dream.

In Brotherhooves Social, he swings a jumping rope with Royal Pin for Apple Bloom and "Orchard Blossom" during the social. In Crusaders of the Lost Mark, he is seen speaking with Shoeshine during The Pony I Want to Be, and witnesses Diamond Tiara knock over Goldengrape's cart of apples during Light of Your Cutie Mark. In Scare Master, he is among the ponies decorating Ponyville for Nightmare Night, pulling a cart full of pumpkins.

Lucky Clover appears in the crowd for Trixie's show in No Second Prances, talks to Golden Harvest in Newbie Dash, appears in the tale in A Hearth's Warming Tail, watches the Applewood Derby in The Cart Before the Ponies, acts as the referee for the buckball game in Buckball Season, watches Gabby play baseball in The Fault in Our Cutie Marks, and pushing storm clouds over the Castle of Friendship in Every Little Thing She Does (there, he is a Pegasus pony).

Lucky Clover appears at Starlight Glimmer's graduation ceremony in Celestial Advice, with an apple-themed cutie mark taped over his real one in Fame and Misfortune, talks to Berryshine in Triple Threat, and talks to Sunshower Raindrops in It Isn't the Mane Thing About You. In A Health of Information, he appears in a line of ill ponies suffering from Swamp Fever spots to Mage Meadowbrook's house in a flashback from more than a thousand years ago. In Shadow Play - Part 2, he appears in another thousand-year old flashback in Stygian's village as the sirens attack it.

In The Maud Couple, Lucky Clover as a patron of the Ponyville Comedy Club and later attends Maud Pie's birthday party outside Ponyville Town Hall. In Non-Compete Clause, he makes a background appearance in the School of Friendship walking down the stairs with Star Hunter. In The Break Up Break Down, he makes a background appearance as a customer at the Ponyville Café sitting with Rainbowshine during Hearts and Hooves Day. In The End in Friend, he appears as the referee for Rainbow Dash and Rarity's buckball game. In Yakity-Sax, he walks in the park where he hears Pinkie Pie's poor yovidaphone playing and later attends a party for Pinkie Pie at Sweet Apple Acres, standing with Cherry Berry. In Road to Friendship, he makes a background appearance attending Trixie's magic show at the park in Ponyville.

In the special My Little Pony Best Gift Ever, Lucky Clover appears carrying a stack of presents out of a house and nearly bumps into "Princess Erroria" during One More Day. He later appears in the Ponyville Marketplace watching as Twilight's friends get caught up in her Hearth's Warming to-do list, walking to Berryshine's stand and later operating his own.

In The Beginning of the End - Part 2, Lucky Clover appears as one of King Sombra's mind controlled slaves following him to Canterlot and later standing on a Canterlot Castle balcony beside Sassy Saddles as the Mane Six arrive in front of Canterlot. In Common Ground, he appears in the opening newsflash refereeing a buckball tournament, and later referees the exhibition match between Ponyville and Quibble Pants' team during a tournament in Appleloosa. In The Summer Sun Setback, he makes a background appearance in Canterlot in the audience for the final Summer Sun Celebration. In Growing Up is Hard to Do, he appears as a passenger on the Friendship Express with Royal Riff as the Cutie Mark Crusaders walk over the train seats during Being Big is All It Takes. He later appears spectating the Animal Showcase at the Appleloosa County Fair. In The Big Mac Question, he makes a cameo appearance standing beside a flower stand at the chaotic Ponyville Marketplace watching one of Discord's living apples. In The Last Problem, he appears in a flashback as a passenger on the Friendship Express reading a book, sitting with an unnamed pony.

Some background pony variants using Lucky Clover's basic design exist. These include Lucky Clover's appearance in The Best Night Ever, when he is seen with a blue coat. A Pegasus version of Lucky Clover appears in Sonic Rainboom as a contestant in Best Young Flyer competition, in Rainbow Falls near the train station, and in Tanks for the Memories moving clouds below Cloudsdale. Additionally, this also includes his presence in Hearth's Warming Eve, when he, along with several other ponies, is seen in the play with a lighter coat and with makeup around his eyes. Finally, he sometimes has a different design in Equestria Games and Tanks for the Memories.

There are several pony variants that use Lucky Clover's basic design. In Over a Barrel and The Last Roundup, a mustached pony ("Shamrock") who bears a striking resemblance to Lucky Clover appears in Appleloosa and Dodge Junction. In Putting Your Hoof Down, a pony (Felix) with the same color scheme and cutie mark is shown walking in the background, but with a different mane style and different eye color. In The Mysterious Mare Do Well, another mustached pony ("Pine Breeze") seen staring at Rainbow Dash appears with the same color scheme, but with a different cutie mark and different mane style.

On March 17, 2013, Hasbro's My Little Pony Facebook page posted an image of Lucky Clover and wrote "Happy St. Patrick’s Day from the luckiest pony out there, Lucky Clover!"[3]

In the Best Gift Ever short, Triple Pony Dare Ya, Lucky Clover appears waiting in line for Granny Smith's Hearth's Warming fruitcake at the Ponyville Marketplace.

Lucky Clover appears in episode 5 of Fundamentals of Magic, "When Magic Goes Wrong".

A partially translucent mini-figure toy of Lucky Clover was leaked in early August 2012,[4] and its corresponding collector card was leaked in late November 2012; the toy and card were released as part of the seventh wave of mystery packs in January 2013.[5] The figure uses the Big McIntosh mold but features the color scheme and cutie mark of the show character. According to the card, "LUCKY CLOVER knows working together makes any job easier!" His name comes both from the card and from the packaging of the wave, which each list the name as a trademark. A mystery pack wave 7 image formerly displayed by a mystery pack listing on the website of the Greek company KAPSIS depicts Lucky Clover, referred to as "Lucky/Shamrock", with the same design as in the show.[6]

Spike: Then let's get moving! Hyah!
Caramel: Excuse me!?
Spike: Um... I...
Lucky Clover: If you weren't friends with our neighbor Rarity... Hmph! 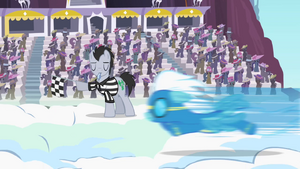