Luster Dawn is a female unicorn who appears in the season nine episode and series finale The Last Problem. She is introduced as the top student at Princess Twilight Sparkle's School for Gifted Unicorns in future Canterlot, similar to Twilight's role as Princess Celestia's student many moons prior.

Josh Haber and Jim Miller have disagreed whether either Starlight Glimmer or Sunburst are related to Luster Dawn; Haber implied they may be, but Miller said he felt it would not make sense for the daughter of the heads of the School of Friendship, who are also personal friends of Twilight Sparkle, to have such an anti-friendship attitude and have little idea as to who Twilight and her friends are. However, Miller ultimately said it is up for fans to decide.[1][2][3][4][5]

In The Last Problem, Luster Dawn appears as Princess Twilight Sparkle's student at the School for Gifted Unicorns in future Canterlot. At Twilight's castle, Luster approaches her teacher and says she has no interest in the school curriculum's focus on making friends, seeing friendship as a waste of time and preferring instead to pursue independent study. Princess Twilight then tells Luster the story of how her coronation went disastrously wrong many moons prior.

At first, Luster interprets Twilight's story as proof of her view that making friends is pointless, but after meeting Twilight and her friends' "Council of Friendship" and seeing how close they have stayed throughout the years, she changes her stance. When Luster is unsure how to start making friends herself, Princess Twilight sends her to Ponyville, where her own journey of friendship first began. At the end of the episode, Luster Dawn departs to spend time with her new friends, including a Kirin, a griffon, a yak, and another pony.

Luster Dawn is a character in Gameloft's mobile game, and the protagonist of "The Crowning Achievement" event. In the story, she is placed in charge of Twilight's "Coronation-versary" following the events of The Last Problem, unaware that she and several ponies from the future have traveled back in time. Her bio states "Living proof that, no matter how much things may change... some things stay the same. And some begin all over again."

Like Twilight at the start of the series, Luster is portrayed as very studious and initially being more interested in studying than friendship, claiming at one point that she "could spend weeks in the library doing research", and believing that the pursuit of friendship is ultimately a "waste of time". She has a very close relationship with her teacher Princess Twilight, having much respect for her and wanting to accomplish as much as she has. Luster also appears to have a habit of jumping to conclusions and making premature assumptions.

"I've enjoyed every moment at the School of Magic. But I'm just not sure it's the right place for me."
— The Last Problem

"I was hoping to set up an independent course of study. I want to accomplish as much as you have someday."
— The Last Problem

"Friendship looks like more of a distraction than anything else and ultimately a waste of time."
— The Last Problem

"If friendships ultimately fade, why even make them in the first place?"
— The Last Problem

"I never thought about friendship being something to work at, and I don't mind work. I guess if they don't have to fade away, maybe making friends isn't the waste of time I thought. But I've been so focused on my studies, I wouldn't know where to start."
— The Last Problem 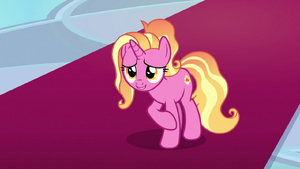