Lyra Heartstrings and Sweetie Drops' human counterparts appear in the My Little Pony Equestria Girls franchise. They are students at Canterlot High School.

In My Little Pony Equestria Girls: Rainbow Rocks, Lyra Heartstrings and Sweetie Drops appear as students of Canterlot High School. As a result of the Dazzlings' hypnotic singing, they frequently argue with their fellow students, including Octavia Melody.

In the CHS Musical Showcase, Lyra and Sweetie Drops perform a piano duet—their vocals are obscured by the Dazzlings' Under Our Spell—but they are eliminated from the competition in the second round by Trixie and the Illusions. Near the end of Under Our Spell, they hold Derpy back from fighting with Bulk Biceps.

In Friendship Games, Lyra Heartstrings and Sweetie Drops appear as members of the Canterlot High School Wondercolts, often seen in Flash Sentry's company. Sweetie Drops has a brief line of dialogue greeting human Twilight Sparkle thinking that she is the Twilight from Equestria. During a welcoming party for Crystal Prep Academy in the CHS gymnasium, Lyra mingles with Upper Crust.

During the Friendship Games' Academic Decathlon, Sweetie Drops is partnered with Flash Sentry in the home economics round, where they bake a loaf of bread instead of a cake, and Lyra and Sweetie Drops are partnered together in the woodshop round.

Lyra and Sweetie Drops are the central characters in All's Fair in Love & Friendship Games. They are portrayed as best friends who have known each other since at least eighth grade and frequently finish each other's sentences. However, when the Friendship Games tryouts begin, they become extremely competitive and face off in several random and non-sequitur events. In the end, both Lyra and Sweetie Drops make the team and reconcile with a hug.

In Legend of Everfree, Lyra and Sweetie Drops go with their friends and classmates to Camp Everfree. They appear in various background shots throughout the film, and they take part in Rarity's camp fashion show.

In Dance Magic, Lyra Heartstrings and Sweetie Drops appear together at the Canterlot Mall.

In Mirror Magic, Lyra and Sweetie Drops make background appearances at the Canterlot Mall. They also appear outside Canterlot High School as Starlight Glimmer comes through the portal.

In Epic Fails, Lyra appears walking a dog in Fluttershy's story. In Coinky-Dink World, Lyra and Sweetie Drops have lunch with "Curly Winds" and "Wiz Kid" at the Sweet Snacks Café. In Good Vibes, Sweetie Drops briefly appears at the Canterlot Mall with "Aqua Blossom".

In School of Rock, Lyra appears at Maud Pie's lecture on rocks at the Canterlot Natural History Museum. In Overpowered, Lyra walks through the halls, and Sweetie Drops appears in Pinkie Pie's memories. Lyra appears alone in the beach shorts X Marks the Spot, Aww... Baby Turtles, The Salty Sails, and Turf War. They appear together waiting in line for the Tirek's Revenge video game in A Fine Line, as members of the school knitting club in Queen of Clubs, and as patrons at the Sweet Snacks Cafe in Pinkie Pie: Snack Psychic.

In the second season short Schedule Swap, Lyra appears sawing in wood shop class and Sweetie Drops later appears sitting in the school cafeteria. In Five Stars, Lyra appears dancing in the Sweet Snacks Café with an unnamed patron. In I'm on a Yacht, Lyra attends the Pool Party aboard the Luxe Deluxe and also makes appearances riding in a small sailboat off the ship. In Festival Looks, they appear in separate computer video call profile icons. In Five Lines You Need to Stand In, they appear standing together in the Starswirled Music Festival security line, and Lyra later appears alone in the Festival's bathroom line, which Pinkie Pie turns into a conga line.

Lyra and Sweetie Drops appear wearing glasses in the Twilight Sparkle ending of Best Trends Forever and in the school play audience in Opening Night and Happily Ever After Party. In the latter short, they also appear at the school play after-party in the Rarity and Applejack endings, and Apple Bloom mentions Sweetie Drops in the Rainbow Dash ending.

In the second season, Lyra and Sweetie Drops make background appearances in Inclement Leather, sitting at a table at the Starswirled Music Festival. In the Rarity ending, they participate in the festival's "RainHairDon'tCare" trend. In Lost and Pound, they appear walking by the festival food trucks. They also appear by the food trucks in the Rarity ending. In the Applejack and Sunset Shimmer endings of Costume Conundrum, Sweetie Drops appears attending Bulk Biceps' costume party dressed in the owl costume she wore in All's Fair in Love & Friendship Games.

In Forgotten Friendship, Lyra and Sweetie Drops appear together in the CHS lobby during We've Come So Far and in the parking lot during Sunset Shimmer and Wallflower Blush's confrontation. Lyra also appears in yearbook photos and in Wallflower's memories of the Crystal Prep welcoming party.

In Rollercoaster of Friendship, Lyra and Sweetie Drops make a cameo appearance running out of the haunted house at Equestria Land with Trixie. They subsequently appear together riding the rollercoaster and spectating the Equestria Land light parade. During Photo Booth, Lyra appears watching the bumper cars with Derpy.

In Spring Breakdown, Lyra appears talking to Octavia in front of the pool while enjoying the spring break cruise aboard the Luxe Deluxe and then being served a drink by a ship employee. She subsequently appears lying on a sunlounger and expresses confusion when Rainbow Dash asks if anyone has seen "bad magic" aboard the yacht. She later appears transformed into a unicorn in the Castle of Friendship along with other transformed passengers as they try to return home.

Sweetie Drops and Lyra appear at the Starswirl Music Festival in the audience of PostCrush, again sitting at a picnic table while Sunset angrily waits for her time loop to end, and another walking by both singing a verse of Find the Magic.

In "Saving Pinkie's Pie", Lyra and Sweetie Drops take part in a big snowball fight, hugging each other for comfort and protection. In "Dashing Through the Mall", Lyra surprises Sweetie Drops with a gift at the Canterlot Mall, and they later appear in the background with "Mystery Mint".

Sweetie Drops appears on page 10 of the My Little Pony Annual 2013 as a member of Canterlot High School's gardening club. She briefly interacts with Applejack and makes fun of her manner of speech. Her appearance in the comic predates her appearance in Rainbow Rocks.

Lyra Heartstrings and Sweetie Drops, under the name Bon Bon, are featured in the Equestria Girls mobile app.

Equestria Girls dolls of Lyra Heartstrings and Sweetie Drops were released as "Encore" tie-ins with My Little Pony Equestria Girls: Rainbow Rocks and are listed on Hasbro's website.[1][2] The back of the dolls' packaging describes Lyra and Sweetie Drops' "Rockin' Style"s as "cool rainbow accents" and "sweet candy colours" respectively.

Lyra appears alongside her pony counterpart on the WeLoveFine-licensed T-shirt "EQ Lyra Believe". Her appearance on the T-shirt predates her appearance in Rainbow Rocks. 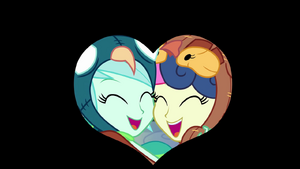