Lyrica Lilac, or simply Lyrica, is a female Earth pony with a pale lavender coat, a light yellow mane, purple eyes, and a lyre cutie mark. The parts of her name were given by fans before they were adopted officially by Hasbro. She has speaking roles in Green Isn't Your Color and The Best Night Ever.

Lyrica Lilac was to appear in Call of the Cutie.[1]

Lyrica Lilac first appears in The Ticket Master, during Rarity's fantasy of marrying Prince Blueblood. She later appears in Green Isn't Your Color, watching Fluttershy's fashion shows. Along with the other ponies, she is at first annoyed when Fluttershy 'ruins' a show, but eventually laughs and delivers her second line with Royal Ribbon. She also appears in Applejack's flashback in The Cutie Mark Chronicles, walking along a street in Manehattan with Sealed Scroll and later attending the Oranges' dinner.

In The Best Night Ever, Lyrica appears numerous times in and around the castle. During At the Gala, she is part of Rarity's, Rainbow Dash's, and Pinkie Pie's choirs. She is forced into a hug by Pinkie at the end of I'm at the Grand Galloping Gala. She is present when Pinkie gets the ensemble to play the Pony Pokey, and reprimands her at the song's end.

In Sweet and Elite, Lyrica Lilac appears at the beginning of the episode walking through Canterlot, makes several appearances during Becoming Popular (The Pony Everypony Should Know) such as singing in the opera. She attends the garden party at the episode's end with "Ponet" where her mane is knocked off by Rainbow Dash's wayward croquet mallet. She appears at the beginning of Hearth's Warming Eve, in Cranky Doodle Donkey's flashback in A Friend in Deed, and at the wedding and reception in A Canterlot Wedding - Part 2.

Lyrica Lilac appears in Make New Friends but Keep Discord as a guest of the Grand Galloping Gala. She also appears in Amending Fences and Rarity Investigates!

Lyrica Lilac appears in The Cart Before the Ponies.

In The Beginning of the End - Part 1, Lyrica Lilac makes a cameo appearance at the beginning inside Canterlot talking to Upper Crust.

In chapter 13 of the chapter book Pinkie Pie and the Rockin' Ponypalooza Party!, "Pinkie Takes Action!", Pinkie Pie mentions Lyrica Lilac as being a musician.

Lyrica Lilac is a playable character simply named Lyrica in Gameloft's mobile game. Her in-game description states, "A high-society pony with a cutie mark of a lyre."

Toy releases of Lyrica, displayed at the 2013 New York Toy Fair, include a Toys "R" Us exclusive brushable release arriving in-store Summer 2013 and a miniature collectible named Lyrica Lilac. A second mini-figure toy of Lyrica Lilac has been leaked.

"So graceful."
— Describing Fluttershy in Green Isn't Your Color

Rarity: Bravo! I say bravo!
Lyrica Lilac: Bravo? Who could possibly say bravo to that horrid display?
Rarity: Such attitude! Such pizzazz! She's invented an entirely new kind of modeling! Bravo!
Lyrica Lilac: Who is saying these things?
Royal Ribbon: It's her. The unicorn in the gorgeous cape and headdress.
Lyrica Lilac: Now that is a pony who clearly knows a thing or two about fashion. Well, if that fabulous pony likes it, then I do too! Bravo!
— Green Isn't Your Color

"Young lady, this is not that kind of party!"
— Addressing Pinkie Pie in The Best Night Ever 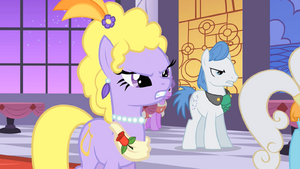