The Mad Men ponies[1] are six background Earth and/or unicorn ponies designed to resemble some of the cast of the AMC drama television series Mad Men, including Business Savvy, Pegasus Olsen, Joan Pommelway, Roger Silvermane, Pete Canterbell, and Bronco Benson. They are gradually introduced in the IDW comics' My Little Pony Micro-Series Issue #8 and in the episodes Rarity Takes Manehattan and Made in Manehattan, and most of them are often depicted in episodes taking place in Manehattan, where at least one or two of them live.[2][3][4][5]​[​dubious – discuss‍​]​ Most are unnamed in the series, "Pete Canterbell" and "Bronco Benson" being placeholder names, but Business Savvy, Pegasus Olsen, Joan Pommelway, and Roger Silvermane are named in merchandise.

In early April 2013, Meghan McCarthy tweeted as part of an April Fools' Day joke that My Little Pony Friendship is Magic season four episode twenty-two would be "Best Pony", wherein "New pony comes to town and she’s cool and likes craft beer and Legos[sic] and has a typewriter Cutie Mark",[6] referring either to her own original character representation[7][8] or to Pegasus Olsen.

Business Savvy, Pegasus Olsen, Joan Pommelway, and Roger Silvermane first appear in Rarity Takes Manehattan; Savvy and Olsen are depicted working in a Manehattan office, and Joan and Roger are depicted having coffee at an outdoor cafe. During the song Generosity, Joan and Olsen briefly appears with different color schemes, and Savvy with a different cutie mark. Later in the same episode, Savvy briefly appears with a different mane and tail color, and all four appear later waiting in the rain for a cab.

In Trade Ya!, Joan, Roger, and Olsen attend the Rainbow Falls Traders Exchange. Joan and Roger appear in a crowd auctioning for for Twilight Sparkle's books, and Olsen appears in the background while Rainbow Dash attempts to trade for a first-edition Daring Do book.

Near the end of Twilight's Kingdom - Part 1, Joan and Olsen appear in the amphitheater when Discord and Lord Tirek appear.

In Made in Manehattan, Business Savvy, Pegasus Olsen, Roger Silvermane, and Joan Pommelway make multiple background appearances in Manehattan. Savvy and Olsen sometimes appear with different color schemes, and Olsen has one line of dialogue while passing Applejack in a Manehattan intersection.

In The Gift of the Maud Pie, Pegasus Olsen, Joan Pommelway, Business Savvy, and Roger Silvermane make multiple background appearances in Manehattan. As in Made in Manehattan, Savvy and Olsen sometimes appear with different color schemes.

In The Saddle Row Review, Joan, Olsen, Roger, and Savvy make several background appearances in Manehattan. All four attend the grand opening of Rarity For You.

In Fake It Til You Make It, Pegasus Olsen appears as a customer at Rarity For You. Joan also appears with a speaking role, with a British accent.

In Grannies Gone Wild, Business Savvy appears in the arcade by the "Pop a Balloon" game.

In Common Ground, Pegasus Olsen appears standing outside the Appleloosa buckball stadium with an unnamed stallion and later briefly appears playing buckball against the Ponyville team. In Daring Doubt, Roger Silvermane and Joan Pommelway appear attending Groom Q.Q. Martingale's book signing in Manehattan. In Growing Up is Hard to Do, Pegasus Olsen appears aboard the Friendship Express as an adult Scootaloo passes her by riding her scooter inside.

In My Little Pony Micro-Series Issue #8, Business Savvy, Roger Silvermane, Pegasus Olsen, Bronco Benson, and Pete Canterbell appear at a pony-teacher committee hearing to discuss Professor Inkwell's competency as a teacher.[9] Savvy appears on page 16, and Roger, Olsen (as a unicorn), Benson, and Canterbell on page 19.[10][11]

"Watch it!"
— Pegasus Olsen, Made in Manehattan 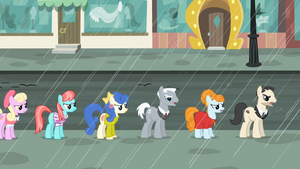