Made in Manehattan is the sixteenth episode of the fifth season of My Little Pony Friendship is Magic and the one hundred and seventh episode overall. The title is a reference to the 2002 film Maid in Manhattan.

In this episode, Applejack and Rarity are called by the map to the city of Manehattan to help Coco Pommel on a big project.

The magazine covers were designed by Charmaine Verhagen.[2]

Coco Pommel as a filly and the new pony characters were designed by Verhagen, Rebecca Dart, Matt Herring, Kora Kosicka, and Fernanda Ribeiro.[3][4]

The brown pony wearing headphones is a representation of Hasbro Studios executive director Brian Lenard.[5] The purple pony with bananas for a cutie mark is an original character of former Hasbro head of development turned MLP writer Mike Vogel.[6]

The scene when Applejack and Rarity arrive at Manehattan reappears in Harvesting Memories.

The episode begins at the Castle of Friendship; Twilight Sparkle reads books in an effort to stave off boredom, but she has already read all of the books in her library. Rarity and Applejack suddenly arrive, having been summoned by the Cutie Map through their cutie marks. Twilight is pleased to finally have something to do, but unfortunately, her cutie mark is not shimmering like Rarity and Applejack's.

Rarity is excited when the map appears to call her and Applejack to a particular neighborhood in Manehattan. Applejack, however, is confused about why the map would summon her—a simple country pony—to such a large city, but Twilight is certain that the map chose her for a reason. Despite having to miss the upcoming Sisterhooves Social, Applejack and Rarity set out.

Upon arriving in Manehattan, Applejack is surprised by the city's fast-paced hustle and bustle. Following a brief encounter with a hat salespony, Applejack and Rarity wander the neighborhood in search of the friendship problem they've been summoned to solve, but with little luck. Just then, Rarity finds a flyer promoting the restoration of the Midsummer Theatre Revival, a traditional Manehattan outdoor stage show. Much to Rarity's surprise, the organizer of the event is Coco Pommel.

Applejack and Rarity go to Coco's apartment to meet with her, and she explains that the Midsummer Theatre Revival was a community-driven play created by Bridleway costume designer Charity Kindheart. After Charity moved away, her old neighborhood lost its sense of community. Coco has attempted to take over for Charity, but her busy workload and lack of volunteers have made things difficult.

Rarity and Applejack eagerly offer to help Coco with her theater project.

The next day, Applejack and Rarity try to recruit volunteers to help with the theater restoration, but the ponies they talk to are less than eager to assist. To make matters worse, Coco is expecting the Method Mares, a well-known theater troupe, to arrive the next day for a costume rehearsal. Being the only two called by the Cutie Map, Applejack and Rarity assure Coco that they'll have everything prepared in time.

"Everything is going to be just fine!"
— Rarity

However, their confidence wavers when they see the neglected state of the park where the play will be held. While Rarity helps Coco with the play costumes, Applejack applies her farm-learned skills to fix the park. After a whole afternoon of field work, she only manages to restore the park to mediocre condition. The Method Mares arrive for their dress rehearsal, but as soon as one of the performers steps onto the rickety stage, it collapses.

With a barely tidy park and a destroyed stage, Coco feels like she failed to live up to Charity Kindheart's example and loses hope. Rarity and Applejack begin to question why the map sent them to Manehattan instead of Twilight. Before they give in to their overwhelming task, Applejack suggests they merely focus on what they can do. She proposes putting on a smaller play for a smaller audience, and Coco halfheartedly agrees.

Applejack assembles a little stage in the neighborhood square, and the Method Mares put on a play dedicated to Charity Kindheart. As the play goes on, it attracts the attention of numerous passersby, and they slowly come to remember the sense of community that Charity was famous for fostering.

The play is a huge success among the neighborhood ponies, and the audience commends Coco Pommel for organizing the event. As a result of the play, the neighborhood's sense of community and togetherness is fully restored. Some of the ponies who refused to help Applejack and Rarity before are now eager to help restore the park.

Applejack and Rarity's cutie marks start to shimmer, indicating that their friendship mission is complete. Rarity now realizes why the Cutie Map chose Applejack: even a small contribution can make a big difference.

Applejack: But how will we even know what our mission's supposed to be? That neighborhood probably has twice as many ponies as all of Ponyville.
Rarity: Pff. Kch. Ts! More like three times! Why, it's not only home to the Haypacking District, it's also home to the Fashion District! [to Twilight] Hmm, shame you weren't called as well, though, darling. You did end up quite a fan of the hustle and bustle of Manehattan on our last visit.

Rarity: Say no more! You finish up your work, and by this time tomorrow, you'll be up to your mane in ponies who want to lend a hoof. Applejack and I will make sure of it!
Coco Pommel: You will?
Applejack: You bet your boots we will!
Coco Pommel: Oh, I don't wear boots. I find they chafe my calves when I walk.
Applejack: It's just an expression.

Coco Pommel: This is a nightmare.
Rarity: Oh, not at all, darling! It's quite lovely!
Applejack: I think she was talkin' about the Midsummer Theater Revival.

Applejack: I'm suggestin' we stop worryin' about what we can't do, and start doing what we can! I think I've got a plan. It won't be anythin' big or fancy, but it'll be somethin'. And somethin's gotta be better than nothin', right?
Coco Pommel: I suppose so...
Applejack: That's the spirit! Sorta... 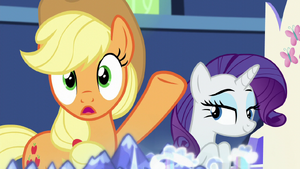 Made in Manehattan image gallery