My Little Pony Friendship is Magic Wiki
Register
Don't have an account?
Sign In
Advertisement
in: Season 3 episode galleries
English

Hooves splash in the water.

A mysterious cloaked figure gallops into the dark and rainy night.

Cloaked ponies are always worth watching.

Oh look what do we have here.

It looks pretty dark in there.

"May I help you, traveler?"

I've got just what you need.

"But I'm afraid this is far too dangerous".

I can finally buy some apples.

Well, what do you know! The customer really is always right!

"Don't be scared little friends, Twilight is wonderful with magic."

Anything happens to them, Twilight-

I will eat your soul!

Who would want to hurt this cute pony?

Fluttershy knows she can trust Twilight.

Fluttershy is deeply worried for her critter friends.

As if one Angel wasn't bad enough!

Fluttershy is a little worried.

Tril and twirl around.

Quite the colorful picture.

Focus on bringing targets down!

Okay, the shows is over, go home bronies and peg-o wait, there's another one! My bad.

Twilight and the animals.

The animals jumping for joy in front of scared Fluttershy

See! It was a piece of cake.

"Twilight! Come quick! It's an emergency!"

The return of Trixie

Ponies gathering around Ponyville's town hall. What could all the ruckus be about?

Rarity doesn't want any of this.

Rarity getting zapped by Trixie.

The Joker perm was a mercy compared to this!

OK, who's the Sith pony, and do I need to finish researching that lightsaber spell?

Well, well. If it isn't the great and powerful Trixie.

"What the hoof are you doing here?!"

Rainbow Dash's wing is enlarged by one of Trixie's spells.

Careful there, Rainbow Sephiroth! Don't run into any, heh, Clouds!

Cowering down from an awesome pony.

The world is upside down!

Snips and Snails attached at the horn.

I'm starting to wonder if Unicorn horns are sturdier than we originally thought.

Enough with the body horror!

Smug as a bug in a mug, waiting to scare the drinker.

I thought I deleted Defence Curl out of him a long time ago, like, say, Level 15.

Spike is a Dragon Ball

An implied pun? You wretched FIEND.

"Ah, a sweet chance of revenge! After all...

'Do you have any idea on what you did to me? I had to suffer endless fanfictions of either kidnapping Nyx, saying sorry to you, going to the Lunaverse and eating Pincones! PINECONES!

"What a fakeo!" "The only place where she dwells now is some tiny place called Equestria Daily!"

Sweetie Drops, you did something horrible!

Taking a job at a rock farm!

The return of Pinkie's father!

Hey! Listen to me ramble on how great my family will be in the #5 microissue!!!

I find your lack of silence disturbing, Pinkie

To the Recycle Bin

This is the worst and best possible thing at the same time!!! And how is she breathing?

Those eyes are freaky.

Owlowiscious is so demanding a raise after this

But I don't have enough money!

Do what you want to my friends, but leave the books alone!

I have no mouth and I must party! WAAAAAA!

You're worse than a Yu-Gi-Oh antagonist.

All back to normal. But wait, Pinkie Pie doesn't have her mouth.

I think I now know what hate feels like.

Cue "Duel of the Fates" Music

Oh you messed with the wrong unicorn!

A close-up of Trixie.

My grandpa's deck has no pathetic cards

Winged Tribble! I choose you!

The return of the parasprites.

Oh no, not again!

Trixie makes a blanket of snow fall on Twilight.

Hey Trixie, I "mustache" you a question!

Hmph. This might be enough to impress the neophytes, Sparkle, but you ain't seen nothing yet!

Oh this is not good.

The Age Spell Casted on Snip and Snails

You underestimate the power of the dark side!

Snips: Waah! I fell on my head just like the last time I was a baby!

Almost the same face as Fluttershy in The Best Night Ever

OH NO! Trixie is going Insane!!!

Will this Glass melt away if I touch it? NO

The claw of her assistant, the hoof of Twilight.

Folks? You take care of each other while I go off and do the hero thing.

Twilight practicing magic with a flower.

I think I got it!

If I'm struggling with this, no way Amateur Hour over there could have mastered that spell the old-fashioned way.

And thus once again, your town has been struck
By another foul villain running...wild

So you've come to me, for my expertise
Hoping for ways to defeat her with...little difficulty

With diplomats coming, we have finite time
To punish vile Trixie for her terrible...misdemeanor

Though I am no God-Queen, I shall do my best
So your spellcraft rises above all the...others.

Wow, the cup is full again

Try to be a little more careful with Zecora's drink, Twilight.

I, for one, welcome our new unicorn overlord.

Trixie has a lot of workers now.

Applejack is forced to make tons of applesauce.

We're not going to do anything until Twilight comes back.

That was so uncalled for, Trixie

" thought I told you to dance!"

Pinkie is forced to dance.

Rarity is forced to sew more.

Well there goes the newly made banner.

Looking at that little inflamed area.

Rarity and her own amazing cuteness.

Training with Zecora in the Everfree Dagobah.

On trusting your feelings, you must rely. Do or do not. There is no try.

Remember, a pony's strength flows through the Horse.

"There was something different about her."

Teasing the shippers, you are

Oh gotta skim through these pages for a solution.

Um, I think I may have found something?

"In this new Trixie led Ponyville."

Um, there’s a picture here of that necklace-

Hearing in about the amulet.

"If you read a little further, you'll see—"

"Even though it provides great power..."

"It also corrupts the user."

Just from seeing her eyes something is not good.

Rarity now knows what they're up against.

Fluttershy tries to talk, but nopony can hear her.

"You can't just take the Alicorn Amulet off her neck, it has a magical lock! Trixie's the only pony who can take it off!"

"We need to get this information to Twilight. She'll know what to do."

"If any of us try to leave, Trixie's magical force field will tell her!"

"Trying to sneak past the force field would be impossible without help..."

"...but I know who's got the goods to get into those woods!

Now that she's been noticed, she doesn't want to be!

"Your mission, should you choose to accept it…"

"I'll crack under the pressure!"

"Perfect! Fluttershy’ll sneak out of Ponyville and find Twilight."

Why did I ever earn your respect?! Whyyyyyy?!

We're all in this together

"I know just the design for a dangerous mission outfit!"

I don't like this plan. I'm not proud to be a part of this plan.

Meanwhile, Under the Dome...

Trixie does not trust wheels.

"I'm telling ya, Snips, she's getting weirder and weirder!"

The beavers are not happy.

FCC is letting him be.

"Yeah. I like her better when she was just...a fraud!"

No one will recognize me now!

Cinderella's birds never did this to her

"Oh, this is me being brave! I wanna be brave at home, locked in my closet, with my teddy bear!"

"But how am I supposed to beat that amulet?"

"My magic's not good enough."

Twilight is cute even when she's just listening.

Looking down at something.

Look at that, BATTLE STANCE.

"I know about the Alicorn Amulet!"

"I know you cheated!"

Twilight puts on her necklace saying, "It's way more powerful."

"Than your measly little Alicorn Amulet!"

"More powerful than the Great..."

"I already beaten you."

Twilight Dear, let us leave. I am annoyed with her Self-conceit.

Snips and Snails as babies. (Um, did we ever actually see them get turned back to normal?)

"Little charm can do!"

That oh whatever face.

Aww! Aren't they the cutest?

Thank goodness neither of them gets an acting cutie mark on the spot.

Just taking a peek, so don't mind me.

This isn't so bad.

Rarity what have you been eating?

Twilight in an adorable pose.

Do I have something on my face?

Note that only one Dashie talks.

Lyra enjoying a hay smoothie. "Meh, this happens every week."

AH! She's right next to me.

Am I low enough?

"One more." Says the mare with the mad scientist smile.

"Looks like my amulet is more powerful than yours..."

Twilight not liking what she hears.

Trixie without her Alicorn amulet.

"Gaze upon an even greater."

The Great and Apologetic Trixie

Trixie has a cool magical color.

Have to hold it in.

"Stop it, that tickles!"

"Tickles?" (Was Trixie going to perform the Cruciatus Curse on Rainbow Dash?)

"This amulet is defective!"

Back where it belongs.

"Oh don't mind me Trixie. I only won... again. Proves that I'm better than you"

"Oh, and by the way, the amulet? It's just one of Zecora's doorstops." 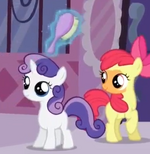 Wait for the signal.

"But what about the pony with the ten instruments?"

Trixie being adorable... once again.

Somehow, the Great and Powerful Trixie always knew it would end this way - at the hooves of an angry, vengeful lynch mob.

I bet the animals are having fun.

Princess Celestia with the Saddle Arabian representatives. Are they horses?

Not a good idea for Fluttershy to take a peek.

"Don't worry Fluttershy. It's not like Twilight will drop them"

"I treated you and your friends so horribly when I was wearing that Alicorn Amulet."

"I just couldn't control myself. "

That maybe or maybe not face.

Oh, what the heck.

Oh, and... Twilight? If loan sharks show up in Ponyville asking about Trixie, Trixie most certainly did not show up here, nor did she spend all their gold on an Artifact of Doom!

The Great and Powerful Tripsie!

Thank goodness! You have no idea how hard it is to breathe through your ears!

Twilight in Phase 1 of her plan to turn Applejack and Rarity into miniature mares...

This has got to count as animal cruelty. 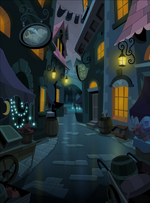 Panoramic view of a "Trixified" Ponyville. 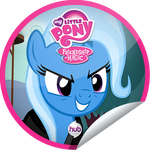 A portion of the original script; contains a line for Mayor Mare
Polski
Community content is available under CC-BY-SA unless otherwise noted.
Advertisement