Magical Friendship Tour is a vinyl soundtrack album containing select songs from the show released exclusively by Hot Topic and FYE, the former "while supplies last" in September 2014—at stores on the 16th and online on the 30th[1]—and the latter limited to 1,000 units on November 16, 2018. The albums contain songs previously released on the albums Songs of Friendship and Magic and Songs of Ponyville. The release comes in two editions with a combined total of three variants: one either with full graphics themed around Princess Celestia on the record or themed around Pinkie Pie[2] and one with full graphics themed around Princess Luna on the record. 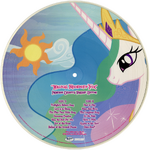 Princess Celestia variant side A

Princess Celestia variant side B 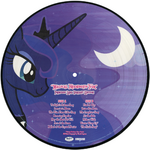 Princess Luna variant side A 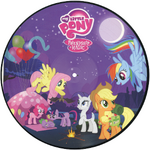 Princess Luna variant side B
Add a photo to this gallery

Retrieved from "https://mlp.fandom.com/wiki/Magical_Friendship_Tour?oldid=2045561"
Community content is available under CC-BY-SA unless otherwise noted.