When Discord learns that Fluttershy is taking a new friend to the Grand Galloping Gala instead of him, he goes to extreme lengths to prove that he isn't jealous.

To a fan at Dallas Comic Con in mid-May 2014, John de Lancie "told that on Thursday he had been recording for an episode of mlp[sic] and that he and fluttershy[sic] were talking and Fluttershy asks if she can bring another friend to their next get together and then Discord gets super jealous."​[​citation needed​]​

A beast​[​specify​]​—alongside different beasts from Pinkie Apple Pie and/or Trade Ya!—and Tree Hugger were previewed in two of the animation images shown at Ponycon NYC on February 16, 2015.[2][3]

The dresses were a collaborative effort by Rebecca Dart, Kora Kosicka, Fernanda Ribeiro, and Charmaine Verhagen.[4] Discord's home was designed by Phil Caesar.[5] The puppet was built and performed by Jayson Thiessen while the background was drawn and filmed by Jim Miller.[6]

The episode was first revealed in a season 5 trailer by Entertainment Weekly and Hasbro in March 2015, with animatics bearing the production number "507".[7][8][9]

According to a Twitter conversation with Jayson Thiessen, "01:22:13:16" is "how many minutes and seconds into episode 507 is the part where Discord's feelings are hurt the most".[10]

At Fluttershy's cottage, Fluttershy and Discord enjoy an afternoon of tea and funny stories. Fluttershy looks forward to introducing him to her new friend Tree Hugger—the mention of whom Discord becomes visibly bothered by—as well as the upcoming Grand Galloping Gala. When she mentions the Gala, Discord assumes that she is inviting him as her plus-one, but Fluttershy says she already invited Tree Hugger.

Discord is upset by this news, having not received a ticket to the Gala himself, but he plays it off as he leaves the cottage.

No Gala for Discord

Discord goes to the Castle of Friendship looking for Twilight Sparkle—frightening Spike in the process—but learns that she's away in Canterlot. At Carousel Boutique, Rarity makes Gala dresses for Apple Bloom, Sweetie Belle, and Scootaloo, who Applejack, Rarity, and Rainbow Dash have respectively invited as their plus-ones. Discord arrives looking for someone to go to the Gala with, but to no avail.

At Sugarcube Corner, Discord learns that Pinkie Pie is going to the Gala with her sister Maud. Down the street, he notices Fluttershy walking with Tree Hugger and goes to introduce himself. Jealous of Fluttershy's new friend, he quickly excuses himself to leave.

In another, bizarre dimension, Discord returns home to keep himself occupied as he vents his frustrations. Outside, a hapless mailpony floats through with a delivery for Discord: a ticket to the Gala that arrived late because the mailpony got lost along the way. Discord is thrilled that he was invited to the Gala after all and wonders who to bring as his guest.

As the Gala gets underway, Princess Celestia thanks Twilight for helping with the Gala planning and preparations. The sound of a trumpet announces the arrival of Discord and his guest: a green, slimy creature called the Smooze. Its appearance—and appetite for shiny objects—startles several of the other Gala guests. Twilight pulls Discord aside and warns him to keep the Smooze under control.

Seeing Fluttershy and Tree Hugger at a ballroom table, Discord interrupts their conversation in an attempt to irritate Tree Hugger, but his attempt fails due to her mellow demeanor. So focused on making Fluttershy jealous, Discord is unable to keep the Smooze from causing havoc around the Gala; as it eats jewels off of Rarity and other guests' dresses, the Smooze slowly grows in size. Discord eventually ditches the Smooze by locking it inside a room, unaware that the room holds a large collection of jewels and shiny valuables.

More than one friend

Discord continues trying to get Fluttershy's attention by doing a stand-up comedy routine, but it is poorly received. Before long, the Smooze, now of immense size, escapes the room he was locked in and covers the Gala floor in slime. The other guests break into a panic, and Twilight and Celestia are unable to bring the situation under control with their magic.

Tree Hugger reasons that the Smooze's "senses are agitated" and manages to calm him down with soft vocalizing. The Smooze releases the ponies from its slime, and the ponies cheer for Tree Hugger. Fed up, Discord rips open a portal to another dimension, intending to banish Tree Hugger there, but Fluttershy angrily tells him to stop. Discord accuses Fluttershy of abandoning him in favor of Tree Hugger, but Fluttershy argues that just because she didn't invite him to the Gala doesn't mean they aren't friends and that one can have different friends for different reasons.

Discord takes this lesson to heart, returning the Smooze to normal size and apologizing to Tree Hugger for his actions.

As the Gala gets back to normal, Discord also apologizes to the Smooze for ignoring it all evening, and Pinkie Pie invites the Smooze to dance. Twilight apologizes to Princess Celestia as well for the almost ruined Gala, but Celestia is in good spirits, revealing that she invited Discord to liven the Gala up. She joyfully leads Twilight onto the dance floor and says the night is still young.

Discord: Ohoho, but that's not all! When I went to look for them again, they were on the ceiling!
Fluttershy: [laughs] Oh, Discord, I've never known anypony as funny as you! I love that story about the time you tried to train your right paw... [giggles] ...to fetch your left leg! [giggles]

Discord: I am famished. I'll take all the cakes.
Pinkie Pie: All of them?! He wants all of the cakes!

Discord: It's not as if any of this actually mattered! I don't even want to go to the Gala anyway!

[fanfare]
Announcer: Announcing the spirit of chaos, Discord, and his guest, the, uh...
Discord: [unintelligible whispering]
Announcer: The Smooze!

Twilight Sparkle: [hushed] What are you doing here with... that?!
Discord: Now, now, now. The Smooze may be an "it", but it's an it with a heart of, well, blob.

Tree Hugger: Nice to meet you. I'm Tree Hugger. Blessings.
Discord: You have met me before actually! [snorts]
Tree Hugger: Cool! Like, in another life, maybe?

Discord: I've only got these tiny mismatched wings, and even I can fly better than Twilight Sparkle! Am I right? Pchoo!
[rimshot]
Twilight Sparkle: Hey!
Princess Celestia: [giggles]

Fluttershy: What if you had a friend that you could discuss chaos-based magic with? Would that mean we weren't friends anymore?!
Discord: Uh... [stuttering] No, I suppose not. It would just mean that I'd have different friends for different things...

Discord: Well, friends! I think I may actually grow to like this multiple-friend thing.
Maud Pie: I like it too.
Pinkie Pie: Hey, it's not a party until somepony spreads magic-resistant ooze uncontrollably over the ballroom! [squee] Come on, Smoozinator! Let's dance!

Twilight Sparkle: I'm sorry, Princess Celestia. I thought I could give you a break tonight, but it turns out I was in over my head.
Princess Celestia: You have nothing to apologize for. This has been the most fun Gala in years!
Twilight Sparkle: I know, it was a—What?! But there was ooze all over the place! And one of the guests threatened to send somepony to another dimension!
Princess Celestia: I know! Can you imagine how dull it would have been if I hadn't invited Discord? Come on! Whoo! The night is still young! 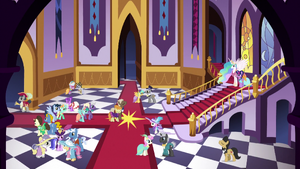