"When I went to look for them again, they were on the ceiling!"

Somepony is full of giggles

"Oh, Discord, I've never known anypony as funny as you!"

"I love that story about the time you tried to train your right paw..."

"...and I can't wait for you to meet my friend Tree Hugger."

"I met her on a trip to see the Breezies."

"She's a member of the Equestrian Society for the Preservation of Rare Creatures."

"We're all gonna have so much fun together at the Grand Galloping Gala!"

"Oh, I was wondering when you were going to ask me. I'd love to."

"I assumed you'd have your own ticket..."

"...since you and Princess Celestia are friends now."

"Were you not invited?"

"It probably got lost in the mail."

"No biggie, as the foals say."

"But we haven't had any of our Tuesday teacakes."

"...exclude them from our party this time."

Why haven't we seen Twilight's room yet?

"Uh, she's in Canterlot, helping Princess Celestia with the Gala!"

Can't sleep, clown will... well, you know the rest.

"The excitement, the anticipation!"

"I wouldn't miss this for all the jewels in Equestria!"

It's the Cutie Mark Crusaders' first time at the Gala.

Wow, we haven't seen Apple Bloom in a usual dress!

"My little sister's all grown up!"

Whatever happened to "Applejack cries on the inside, Twilight!"

"This is gonna be the best night ever!"

A startling appearance, even from an honorary fellow Cutie Mark Crusader.

"...these adorable little cutie pies have their own tickets..."

"Ahem! To answer your rather rude question..."

"Have a wonderful, special, fantastic day!"

How'd she know I was in here?!

"...in order of most delicious to incredibly, unbelievably delicious!"

Pinkie, that camera is expensive!! Leave it alone!!

"He wants all of the cakes!"

"Oh, by the way, are you bringing anypony?"

"...but it turned out she didn't want to go, so I started asking around and around and around, and I couldn't think of anypony, and I was about to just go by myself, and I realized, of course! Who loves fancy exciting affairs more than anypony else?"

Whoever wrote this joke was obviously a fan of Das Boot.

"You know what? Cancel my order."

"You want none of the cakes now?!"

But this financial quarter was going to be so good!
Add a photo to this gallery

"I guess every being in Equestria is funny today."

"Oh, how rude of me. Tree Hugger, this is Discord."

"Radical to meet you. Really digging your vibe."

"It has nothing to do with seeing you or not seeing you."

"You can rest assured of that."

Discord, knock it off.

"Righteous!"
Add a photo to this gallery

At Discord's home / The Gala ticket

So, finally, we get to see Casa de Discord.

Shades of Escher in this house.

"Oh, Tree Hugger. You're such a great friend."

"So much funnier than unfunny old Discord!"

"Before somepony else thinks he's my friend..."

"...and expects to be asked instead."

"I can make more new friends anytime I want." (Aren't those dishes supposed to come out clean? Oh, wait. This is Discord we're talking about.)

"It's not as if any of this actually mattered!"

"I don't even want to go to the Gala anyway!"

"Are you perhaps looking for me?"

"Are you 'Discord or current resident'?"

"I can't find any street numbers in this place."

"My ticket to the Grand Galloping Gala!"

"I was invited after all!"

"Well, I got a little lost after I escaped the flying badgers..."

"Can you point me in the direction of the bottomless pit?"

"I think I can make my way back from there."

"Looks like I'll see you at the Gala after all, Fluttershy."

"She'll think that she's my only friend."

"Who could I bring on such short notice?"

This laugh again...
Add a photo to this gallery

At the Gala (again)

"I must say, it's been very nice having you take over some of the planning responsibilities for this year's Gala."

"Anything I can do to make it easier on you."

"Thank you, Twilight. I am quite looking forward..."

"...to just enjoying the Gala for once."

"Announcing the spirit of chaos, Discord, and his guest, the..."

"He does have a yen for shiny things, the rascal."

Excuse me; didn't bring any napkins.

"This night is extremely important to me, Discord."

"Keep it under control!"

"Tell me, have you seen Fluttershy anywhere?"

Is the Smooze part dragon?

"The aura coming off the waterfall was so alive!"

"Oh, Fluttershy. I didn't see you there."

"How did you even know to look for an aura on a waterfall?"

"Discord! I thought you weren't coming!"

"No. I actually never said that. But funny how you remembered it that way."

Tree Hugger....Definitely not a stereotypical hippie.

"Anyway, good to see you. Tree Friend, is it? Your name is slipping my mind right now. How strange."

"You've gotta be kidding. You don't remember me?"

"I meet a lot of different creatures..."

"...each one of them perfect and unique."

"...it's just great to be here with my oldest, bestest friend."

"Am I really your oldest, bestest friend?"

"You think I don't have other friends?"

"I was talking about the Smooze!"

"Well, I mean that's what we called him back in college."

"It's so in rhythm with my life force!"

"I can't believe I've never heard you speak of the Smooze before."

"Well, I'm glad you got that, because that's what is true."

"That's wonderful! The four of us should go out to dinner sometime!"

"We should all go out to dinner sometime?!"

"Have you no heart?"

"Oh, oh! It looks like somepony wants to mingle."

"Oh, okay. Treezie and I would love to talk to you more later!"

"Sort of a juvenile nickname, don't you think?"

Discord and The Smooze

"I need to make this a party of one for a little while."

"Just stay out here until I come for you."

Discord, I thought you said we were close.

Guess they aren't really that close.

"...because that's how crazy we are when we're together."

"...we went to the store and bought two cakes."

"...you kind of left out all the fun and frivolity there."

Wait, are we watching Discovery Family or Nickelodeon?

"That creature took my jewels!"

Twinkleshine, how'd you get outside?

"I thought I told you to keep your friend under control!"

"Oh, please. I have better things to do than to watch that thing all night."

"...that thing is a dear, dear friend, and I'll make sure that the ooze, uh, that he can't help but secrete doesn't get on anypony else."

Rarity, you don't even have visible private parts!

"Let's just get back to enjoying this magical evening!"

"You are making me look like a fool in front of Fluttershy."

"I'll be back when the Gala is over."

Paydoit!
Add a photo to this gallery

"I just flew into Canterlot..."

"...and wow, are my interspecies parts tired!"

Puh-lease. That joke was old when you told it.

"I've only got these tiny mismatched wings..."

"...and even I can fly better than Twilight Sparkle!"

"Did you ever notice how you always materialize out of thin air?"

"Why not thick air? What's the deal there?"

Story of my life. No respect.

"This is the most basic of jokes!"

I'll never understand why Gallagher is considered a "comedian"? How is smashing watermelon supposed to be humor?

"I knew we shouldn't have invited Fooby the Kamikaze Watermelon to the Gala."

"You're the most basic of jokes."

I've just been heckled by a deadpan rock farm girl...!

Least it's not an elevator full of blood.

Smooze on the loose / Tree Hugger saves the day

"None of my magic works on this ooze!"

"Discord, how could you bring him here?!"

"Oh, my shoes will be ruined forever!"

"That's what you're worried about? Really?"

Row, row, row your Maud
Gently down the ooze.

"This is kind of a bummer."

"Isn't it, though? And to think, it would never have happened..."

"You don't know anything about rare creatures."

"All he needs is some, like, calming auditory therapy."

"I know I always feel really at peace when I'm being bathed in positive vibes."

"Maybe he'll calm down with some sonic bliss."

"Do you even know what you just said?"

Well, Apple Bloom can breathe better now that half of her muzzle no longer covered.

...And it looks like Rarity's shoes are going to be okay, too.

Uh, Discord, that's not very good for your teeth.

"Oh, man. You're really bumming me out."

"Can you just, like, lower your voice a skosh?"

And you thought the human world was weird enough.

"Relax. I'm not going to hurt you. I'm simply going to send you to another dimension."

"I can't have you interfering in my relationship with Fluttershy anymore!"

"Then we can have a good laugh about this whole affair over our regular Tuesday tea."

"I'm doing her a favor, Fluttershy! It's a lovely dimension!"

"I don't understand why you're doing this! We were all getting along so well!"

"...considering you've already stomped all over our friendship by inviting her..."

"Did you really think I'd abandon you just because I have a new friend?!"

"Yes, because that's what you did!"

"No, Discord! I invited a friend to a party! I didn't abandon you!"

"What if you had a friend that you could discuss chaos-based magic with? Would that mean we weren't friends anymore?!"

"No, I suppose not. It would just mean that I'd have different friends for different things..."

"...it looks like I've perhaps overreacted just a skosh."

"Tree Hugger, could you give us a minute?"

"I'm just so new at this whole friendship thing. It's so much more complicated than it looks."

"Do you think maybe you owe somepony an apology?"

Guess Discord has reformed. He was never so considerate to give a pillow.

HA! She really is a "Tree Hugger".

It's true what they say. "Nothing Can Stop The Smooze!"

"Um, I need like a few minutes to clear out my chakras before I can hug you from a place of authenticity."

"Oh, your chakras. [laughs nervously] Fair enough."
Add a photo to this gallery

"Well, friends! I think I may actually grow to like this multiple-friend thing."

"Hey, it's not a party until somepony spreads magic-resistant ooze uncontrollably over the ballroom!"

And it's not an MLP episode unless we hear Pinkie Pie's famous "Squee!"

"I thought I could give you a break tonight..."

"You have nothing to apologize for."

"This has been the most fun Gala in years!"

"But there was ooze all over the place!"

"And one of the guests threatened to send somepony to another dimension!

"Can you imagine how dull it would have been..."

"The night is still young!" 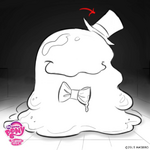 Add a photo to this gallery
Retrieved from "https://mlp.fandom.com/wiki/Make_New_Friends_but_Keep_Discord/Gallery?oldid=1995634"
Community content is available under CC-BY-SA unless otherwise noted.