The Mane-iac appears to be inspired by the Joker of DC Comics, sharing his origin, green hair, purple clothing, and relative insanity. In addition, her powers are similar to those of Marvel Comics' Medusa and the way she "walks" with her mane is similar to how Doctor Octopus from the Spider-Man comics moves around with his robotic appendages. Her name is derived from the word "maniac."

At the start of Power Ponies, Spike shows Twilight Sparkle a couple of pages of a Power Ponies comic book on which the Mane-iac is depicted. Spike refers to her as the Power Ponies' "most evil nemesis". Spike says that she used to be the power-mad owner of a hair-care product company until she accidentally fell into a vat of green liquid and was electrocuted by a downed power line. The accident gave her strange new powers—such as a prehensile, stretchable mane—and caused her to go insane. Another page shows the Mane-iac breaking into the Maretropolis Museum and stealing something called the Electro-Orb.

The Power Ponies track the Mane-iac to her headquarters at the abandoned shampoo factory and defeat her henchponies in a battle. However, the Mane-iac uses her "Hairspray Ray of Doom" on the Power Ponies, freezing the ponies in place and rendering their powers useless. She then takes the Power Ponies prisoner but leaves Spike/Hum Drum alone, considering it pointless to capture him.

Inside the factory, the Mane-iac uses the Electro-Orb to power her doomsday device, which resembles a cross between a large pink blowdryer and a cannon. The Mane-iac says she will use the cannon to amplify the power of her mane by "one million times", expelling an energy blast that will cause everyone in Maretropolis's mane to grow wild. As she gives her victory speech to her followers, Spike traps some of her henchponies and helps in freeing his friends. Just before the Mane-iac can use her weapon on Fluttershy/Saddle Rager, a firefly enters her line of fire, and she swats it. This action angers Saddle Rager, transforming her into a powerful muscular pony. The Mane-iac fires her doomsday device at Saddle Rager, but the beam reflects off Saddle Rager and hits the Mane-iac instead. Saddle Rager destroys the doomsday device, and the Mane-iac's mane grows out of control, wrapping around her like a straitjacket.

In Memnagerie, Mane-iac appears in one of Fluttershy's past memories as she harms a firefly and Fluttershy uses her Saddle Rager powers against her.

In My Little Pony Equestria Girls: Rainbow Rocks, the human version of the Mane-iac is seen on the cover of a video game Applejack and Rainbow Dash play at a slumber party. Her artwork on the box is identical to artwork of her in Equestria Girls merchandise.

In the half-hour special Movie Magic, the Equestria Girls are mistakenly brought onto the set of a Power Ponies film, with Sunset Shimmer cast as the Mane-iac.

Every comic book city has a supervillain. In Spike the Dragon's comic book, Maretropolis has Mane-iac, who gained her powers -- and those wild tendrils and magic orb -- after an unfortunate accident at her shampoo factory. When Twilight Sparkle and friends are transported to Maretropolis as the Power Ponies, they have to defeat Mane-iac and save the city in order to return home.

In the 8-page mini-comic Return of the Mane-iac, the Mane-iac escapes from prison and discovers the Crystal Mirror in her old shampoo factory headquarters. With it, she travels to the human world and encounters a human version of herself.

The Mane-iac is alluded to in Friends Forever Issue #14.

The Mane-iac is visible on Friendship is Magic Issue #30's Comics & Ponies cover RE.

On My Little Pony: Nightmare Knights Issue #1 page 14, the Mane-iac appears in Princess Eris' casino. She also appears on Issue #2 page 20 and Issue #3 cover A.

The Mane-iac appears in Discovery Family (previously the Hub Network)'s online game Power Ponies Go. In level 5, she appears every few seconds and tries to damage the player with her Hairspray Ray of Doom. The final scene of the game (when level 5 is cleared) shows her firing her doomsday device at Spike/Hum Drum, only for the blast to bounce off Spike's reflector and hit her instead.

The Mane-iac is voiced by Brittany Lauda in PlayDate Digital's app Power Ponies.[1]

The Mane-iac is a character in Gameloft's mobile game, and she serves as a boss during the "Nightmare Night at the Museum" and "The League of Evil" events. She also has a story role in the events, the former involving Mare Do Well. Her in-game description states, "The Mane-iac is a manic mare with mayhem on the mind! Arch-enemy of the Power Ponies, this vile super-villain lives for destruction, evil and terrible puns." Update 4.7 added a second Mane-iac with an identical description but with an updated design.

The Mane-iac appears in Little, Brown's storybook adaptation of Power Ponies, Power Ponies to the Rescue!

The Mane-iac is shown to behave in an evil and unhinged manner, expressing delight at the prospect of oppressing Maretropolis. She sneers at the Power Ponies when they fumble with their newly acquired superpowers. The Mane-iac thinks very little of the Power Ponies' sidekick, Hum Drum, even deciding not to take him prisoner with the other heroes, as she believes him to be no threat to her plans whatsoever. She is also portrayed as sadistic and cruel, claiming that the Power Ponies only keep Hum Drum around because they feel sorry for him and calling him useless, and swatting away a harmless firefly just for obstructing her view. Much like her name is a pun, she often uses puns when she speaks.

"Power Ponies! [laughing] How kind of you to join us! [evil laughter]"
— Power Ponies

"Well, this has been quite the mane-raising experience. But I really must be going. [laughing]"
— Power Ponies

"Congratulations, Power Ponies! [laughing] You shall live just long enough to see me fire... the instrument of your destruction!"
— Power Ponies 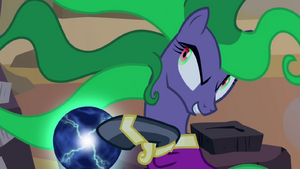