Start a Wiki
Neon Brush, Quick Trim, Comb Over, The Unconditioner, and Blow Dry are the placeholder names of five male Earth ponies, at least twenty-two of whom serve as henchponies to the Mane-iac in the comic-book universe of Maretropolis. They appear in Power Ponies and its adaptation(s) Power Ponies to the Rescue! and Power Ponies Go! They are unnamed in the show and in other depictions, one of which internally identifies Neon Brush as soldier, Quick Trim as officer, and Blow Dry as captain.[1]

Quick Trim, Comb Over, The Unconditioner, Blow Dry, and numerous duplicates of Neon Brush appear in the season four episode Power Ponies as the Mane-iac's henchponies. They first appear confronting the Mane Six, as the Power Ponies themselves, outside the Mane-iac's shampoo factory. During the fight, Comb Over has a brief uncredited speaking role. 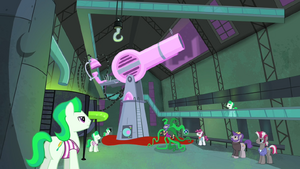 Retrieved from "https://mlp.fandom.com/wiki/Mane-iac%27s_henchponies?oldid=2140852"
Community content is available under CC-BY-SA unless otherwise noted.