Mane Moon, also known as Crescent Moon and Crescent Pony, is a male background Pegasus pony with a light brown coat, darker brown mane, blue eyes, and a cutie mark of a waxing crescent moon. Neither his name nor his title is given on the show, but they are used by merchandise, other media, and promotional material. He shares his design with Buddy, S05E05 Unnamed Pegasus Stallion #1, and sometimes "Thorn", and he shares his mane and tail style with Dr. Hooves (whom he also has a similar color scheme to), Lucky Clover, and Meadow Song.

Mane Moon makes several appearances throughout the show, usually in episodes in which other Pegasus ponies are also featured.

Mane Moon first appears in Sonic Rainboom flying through Cloudsdale, once when Rainbow Dash and Fluttershy arrive to the city and again when Twilight Sparkle and the rest of her friends arrive by hot air balloon. He appears again when Rainbow Dash saves Rarity and the Wonderbolts with her sonic rainboom. After carrying the ponies to safety, Mane Moon takes Spitfire and carries her on his back.

He later appears in Green Isn't Your Color as one of Photo Finish's chauffeurs. Alongside Twilight Sky, he is briefly seen carrying Photo Finish's palanquin (the proceeding shot removes both their wings and changes his cutie mark to an hourglass).

In Hearth's Warming Eve, Mane Moon is an actor in the pageant alongside other Pegasi. He is later seen in Hearts and Hooves Day during The Perfect Stallion, standing alongside Star Hunter. He also makes several appearances throughout Hurricane Fluttershy.

In Wonderbolts Academy, Mane Moon is seen in three shots addressing a group of academy cadets. In Games Ponies Play, he appears in Rainbow Dash's flashback when the Equestria Games are announced. An Earth pony version of Mane Moon appears in Magical Mystery Cure, when he and other ponies are grumbling to Rarity about the weather she creates.

In Rainbow Falls, Mane Moon appears in several background shots and has a speaking role, first commenting on Rainbow Dash's flying ability and then being excited over the Wonderbolts' arrival with Orange Swirl and Sprinkle Medley. He later appears among the crowd while Pinkie Pie is auctioning Twilight Sparkle's book collection in Trade Ya!, appears as a flagbearer in the procession and in the crowd during the closing ceremony in Equestria Games, and appears at the end of Twilight's Kingdom - Part 2, checking out the Friendship Rainbow Kingdom castle.

In Tanks for the Memories, Mane Moon appears among other Pegasi moving clouds in preparation for winter. He also appears in Ponyville's shared dream in Do Princesses Dream of Magic Sheep?, trapped in the clutches of a rampaging sentient house. In The Mane Attraction, he is seen attending Coloratura's concert at the Helping Hooves Music Festival.

In Top Bolt, Mane Moon appears with Warm Front catching Sky Stinger in a net at the Wonderbolt Academy.

In Rock Solid Friendship, Mane Moon makes a background appearance shopping for apples at the Ponyville Marketplace. In Honest Apple, he again appears carrying Photo Finish on a palanquin with Twilight Sky as she arrives at the Carousel Boutique before carrying her out. They later appears carrying both Photo Finish and Hoity Toity on the palanquin. In Fame and Misfortune, he appears talking to Cloud Kicker at a bookstore in Cloudsdale. In It Isn't the Mane Thing About You, he stands under a parasol at a table with Goldengrape at the Ponyville Marketplace.

In Horse Play, Mane Moon appears in the audience for the School of Friendship play.

In My Little Pony Best Gift Ever, Mane Moon makes a cameo appearance flying through Ponyville carrying a bag on the day before Hearth's Warming Eve.

In The Beginning of the End - Part 2, Mane Moon appears as one of King Sombra's mind controlled slaves following him to Canterlot and later confronts the Mane Six when they arrive at Canterlot's gates. In 2, 4, 6, Greaaat, he spectates the buckball game between the School of Friendship and the Schol of Magic and also watches the halftime cheerleading routine. In A Horse Shoe-In, he appears in the audience for Octavia Melody's concert with DJ Pon-3.

Mane Moon is one of many ponies seen in the establishing shot of Ponyville in My Little Pony Equestria Girls: Rainbow Rocks.

Mane Moon is one of the available playable characters in Gameloft's mobile game. He is referred to simply as "Crescent Pony" in gameplay, but he is called "Crescent Moon" in a post by both the official Facebook page of the game[1] and the news feed section of the official Gameloft My Little Pony mini-site,[2] and he is called "Crescent_Moon"[3] and "PAPERMOON"[4] in the game's code. According to the game, Crescent Moon is the caretaker of the Wonderbolts, and Lovestruck considers him to be a shy pony.

Crescent Pony is the caretaker of the Wonderbolts and has a cresent[sic] moon for a cutie mark.

Page 33 of The Wonderbolts Academy Handbook refers to Mane Moon as Crescent Moon and gives him the description, "Crescent Moon keeps an eye on things at the Wonderbolts Academy as the school caretaker. With so many students, it can be difficult to manage, but Crescent Moon knows everypony by name and makes himself available whenever they need his council. There's lots of activity on campus and things can fall through the cracks sometimes, but with CM watching, everypony who walks through that front gate is in good hooves." Mane Moon also appears in a picture with his name listed as "Crescent Pony" on page 177.

Human world Crescent Moon appears in Wondercolts Forever: The Diary of Celestia and Luna. Here, she[sic] is school president of Crystal Prep Academy and one of Celestia's old friends from middle school.

Mane Moon is named with a trademark symbol in the nineteenth wave of mystery pack toys. His collector card description states that he "& Amethyst Star arrive at the show early."

On at least​[​specify​]​ the DVD Season Four Disc 2, closed captions for the episode Rainbow Falls refer to Mane Moon as Crescent Moon. 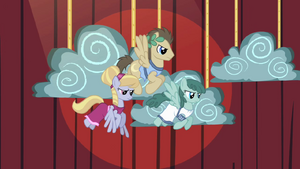