Manehattan[1] is a metropolitan city first depicted in The Cutie Mark Chronicles and featured prominently in Rarity Takes Manehattan. It is the home of Apple Bloom's cousin Babs Seed, Applejack's Aunt and Uncle Orange, party planner Cheese Sandwich, and famous pop singer Coloratura. The name of the city is a play on Manhattan, one of the five boroughs of New York City; much of the city even bears a resemblance to the real-life island.

Many of Manehattan's landmarks and thoroughfares resemble those of the real borough of Manhattan.

Manehattan is a sprawling urban city on an island on Equestria's eastern coast; the official map of Equestria places it northeast of Ponyville and southeast of Starlight Glimmer's old village. It is connected to the Equestrian mainland by a long railroad bridge. In Rarity Takes Manehattan, Rarity and her friends travel from Ponyville to Manehattan via the Friendship Express train in a short amount of time; similar trips are made by Rarity and Applejack in Made in Manehattan and Rarity and Pinkie Pie in The Gift of the Maud Pie.

The city first appears in The Cutie Mark Chronicles, as part of Applejack's flashback to how she got her cutie mark.

The majority of ponies who appear to live in Manehattan are Earth ponies. There are very few unicorns and Pegasi, and almost every unicorn that appears in the city is known to reside elsewhere. In Rarity Takes Manehattan, Rarity says of the city "you do something nice for somepony, and then you never know when they'll do something nice for you". However, very few ponies in the city share this world view.

The city is also shown to have a rich cultural element, serving as home to a large fashion-driven community and theatre musicals.

In Shadow Play - Part 2, it is mentioned that the area that would one day become Manehatten was "cast in eternal night" during the time of the Pillars of Old Equestria.

The Crystaller Building is first featured in Rarity Takes Manehattan and named in Lyra and Bon Bon and the Mares from S.M.I.L.E. It is a tall skyscraper with a giant sculpture of a horse's head on top. It is named and modeled after the real-life Chrysler Building.

The Mare Statue is one of Manehattan's main tourist attractions. It is a large green statue of an Earth pony mare that stands on a small island near the city; the mare depicted wears a robe and crown and holds a stone tablet in her left hoof and a raised torch in her right. The statue's design differs from when it first appears in The Cutie Mark Chronicles and when it appears in The Gift of the Maud Pie, and it greatly resembles the real-life Statue of Liberty, albeit in the form of a mare instead of a woman. In Gameloft’s mobile game, it is referred to as the Statue of Friendship on Friendship Island.

Babs Seed's unnamed school is first mentioned in Apple Family Reunion. Sometime between One Bad Apple and Apple Family Reunion, Babs transferred to a new school and met two other blank flanks who wanted to join the Manhattan branch of the Cutie Mark Crusaders.

The Maneway is Manehattan's underground railway system, the outside of which first appears in Rarity Takes Manehattan and the interior of which is first shown in My Little Pony: Friendship is Magic Issue #21. The main station also appears in Made in Manehattan and The Gift of the Maud Pie, and it appears to be the main thoroughfare in and out of the city.

The Bridleway Theater District first appears in Rarity Takes Manehattan and appears to be the city's central square. Among the popular live musicals featured on Bridleway include Hinny of the Hills and My Fair Filly. The district resembles the real-life Times Square of New York City, and its name is a play on Broadway.

Bronclyn is a residential section of Manehattan that first appears in Made in Manehattan. It is where Coco Pommel lives, and it is home to the city's Haypacking and Fashion Districts. It is also where Charity Kindheart established the community-driven Midsummer Theater Revival. Bronclyn's name is a play on the real-life New York borough of Brooklyn—the same basis for Hooflyn—and the Haypacking and Fashion Districts are references to Manhattan's Meatpacking District and Garment Districts.

An ice-skating rink in Manehattan first appears in The Gift of the Maud Pie. Rarity, Pinkie Pie, and Maud Pie skate on the ice during their outing in the city together. The rink bears a strong resemblance to the real-life Rink at Rockefeller Center.

Manehattan's park is first briefly featured in Made in Manehattan and appears again in The Gift of the Maud Pie. It consists of wide fields of grass and flowers, a river on which ponies can sail swan boats, a stone bridge, and a giant rock.

In Gameloft's mobile game, the "Trot Secret" group quest mentions the location of Whinnyamsburg. Its name is a play on Williamsburg, a real-life neighborhood in New York City.

The Manefair Hotel is a large Manehattan hotel first featured in Rarity Takes Manehattan. The Mane Six stay in one of its rooms during their Manehattan trip, and "Luggage Cart" serves as at least one of its bellhops.

Stinky Bottom's Discount Hat Emporium first appears in Made in Manehattan and is mentioned by name in The Saddle Row Review. In the former episode, Rarity inadvertently prevents a hat sale to one of Stinky Bottom's customers.

A newspaper stand briefly appears in Made in Manehattan. It is run by "Fine Print".

The Cantering Cook is a prestigious Manehattan restaurant featured in The Gift of the Maud Pie. Rarity, Pinkie Pie, and Maud Pie have lunch at the restaurant during their time in the city, and "Port Wine" serves as at least one of its waiters.

A Manehattan specialty store that exclusively sells rock pouches is briefly featured in The Gift of the Maud Pie. Pinkie Pie attempts to buy a rock pouch from the store to give to Maud as part of their "Pie Sisters' Surprise Swap Day", but at the time of her visit, the owner is away on vacation.

An unnamed Manehattan toy store is briefly featured in The Gift of the Maud Pie. S04E08 Unnamed Earth Stallion #1 and "Tornado Bolt" play on a floor piano, and Rarity tries to interest Maud in a giant stuffed giraffe.

An unnamed Manehattan jewelry store is briefly featured in The Gift of the Maud Pie. Rarity tries to interest Maud in the jewels on display, but Maud claims her pet Boulder thinks "they're all too stuck-up".

A Manehattan flea market is featured in The Gift of the Maud Pie. Among the notable items for sale include the Twilicane, a rubber shark, the Inspiration Manifestation spell book, and Smarty Pants.

An unnamed Manehattan diner is featured in The Saddle Row Review. Newspaper columnist Buried Lede interviews the Mane Six about the grand opening of Rarity For You here, and S06E09 Unnamed Unicorn Mare #1 serves as at least one of its waitresses.

Saddle Row is a street in Manehattan featured in The Saddle Row Review. According to Rarity, it is "an entire street lined with the most fashionable boutiques in all of Equestria". One of the boutiques located on Saddle Row is Rarity For You.

Rarity For You, the Manehattan branch of Rarity's Carousel Boutique, first appears in The Gift of the Maud Pie and featured prominently in The Saddle Row Review. Rarity and her friends get the boutique ready for its grand opening, and Coco Pommel, Plaid Stripes, Blue Bobbin, "Betsey Trotson", and "Stärke Kragen" serve as its employees.

Manehattan Escapes is a Manehattan escape room gaming activity featured in All Bottled Up. The objective of the activity is to solve riddles and puzzles that lead to the key for the locked exit. It is run by S07E02 Unnamed Earth Stallion #1, and the Mane Six take part in it for their friendship retreat.

In Rarity Takes Manehattan, Rarity takes part in Fashion Week, a week-long event in which up-and-coming fashion designers showcase their designs for the social elite. Rarity and Suri Polomare initially enter the competition as friendly rivals, but Suri takes advantage of Rarity's generosity and passes off Rarity's fabric and designs as her own.

Another social event is the Midsummer Theater Revival, founded by Bridleway fashion designer Charity Kindheart in her home neighborhood of Bronclyn. According to Coco Pommel, the Revival was a way for Charity to "share her passion for theater with the neighborhood". After Charity moved away from Manehattan and the Revival was forgotten about, Coco assumed control of the project.

Stranger Than Fan Fiction features Manehattan's Daring Do Convention, where fans of Daring Do, such as Rainbow Dash and Quibble Pants, come together to share and celebrate their love for A. K. Yearling's book series.

In A Friend in Deed, Cranky Doodle Donkey mentions having gotten a snow globe in Manehattan during his travels across Equestria.

In an alternate timeline in The Cutie Re-Mark - Part 1, Applejack mentions that Rarity went to Manehattan to help in the war effort against King Sombra.

When Midnight Sparkle opens a dimensional rift to Equestria, Manehattan can be seen in one of the rifts in My Little Pony Equestria Girls: Friendship Games.

Manehattan is one of several locations featured on Hasbro's World of Equestria website.[2] In Gameloft's mobile game, Manehattan is shown on the world map.[3]

Carneighie Hall is a Manehattan performance venue featured in My Little Pony: Friendship is Magic Issue #21. Applejack, Rarity, Fluttershy, Apple Bloom, and Babs Seed attend a magic show performed by Trixie, who uses the show as a front to lure a notorious jewel thief out of hiding. The hall is run by director Clyde Giddyap and named and modeled after the real-life Carnegie Hall.

The Manehattan Museum of Art

The Manehattan Museum of Art is featured in My Little Pony: Friendship is Magic Issue #22. Among its items on display is the Forehoof Pendant.

Hooflyn is a residential section of Manehattan first featured in My Little Pony: Friendship is Magic Issue #22. Babs Seed lives in the Farrier Hill area of Hooflyn; her apartment number is 0526. Hooflyn also briefly appears in My Little Pony: Friends Forever Issue #13. Hooflyn's name is a play on the real-life New York borough of Brooklyn—the same basis for Bronclyn.

Manehattan's Diamond District is featured in My Little Pony: Friendship is Magic Issue #22. It is made up of several jewelry stores and pawn shops, one of which is run by Issue 22 Unnamed Stallion - Diamond Salespony.

A stadium for pony roller derby appears in My Little Pony: Friends Forever Issue #13, used by the Manehattan Manglers and the Fillydelphia Phracturers.

Madisoat Square Garden is a Manehattan arena and performance venue featured in My Little Pony: Friendship is Magic Issue #29. It is used for the Equestrian Wrestling Entertainment championship, in which Cheerilee's twin sister Cherry Blossom is a professional wrestler and participant. The arena's name is a play on the real-life Madison Square Garden—the same basis for Madison Mare Garden.

Madison Mare Garden is a Manehattan performance venue in My Little Pony: Friends Forever Issue #37, described by Rarity as "the most prestigious venue in all of Manehattan". Its name is a play on the real-life Madison Square Garden—the same basis for Madisoat Square Garden.

Hay's Pizza is a Manehattan pizzeria featured in Lyra and Bon Bon and the Mares from S.M.I.L.E. It serves as a front for S.M.I.L.E.'s headquarters.

The Manehattan branch of the Hidequarters is featured in Lyra and Bon Bon and the Mares from S.M.I.L.E. It is the base of operations for the Secret Monster Intelligence League of Equestria.

In Beyond Equestria: Pinkie Pie Steps Up, the Foal Season Hotel is one of the event sites for the Pony Popstravaganza and serves as lodging for several of the celebrity guests, including Songbird Serenade.

In Beyond Equestria: Pinkie Pie Steps Up, Stables Center is the venue for the Glammy Awards which Svengallop attempts to sabotage. 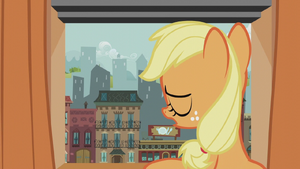