Mango Dash is the placeholder name of a Pegasus pony filly who first appears in the season one episode Dragonshy. She has a light orange coat, light yellow mane and tail, and deep orange eyes.

She, along with "Tornado Bolt", Cotton Cloudy, "Princess Erroria", "Noi", Aura, and Liza Doolots and as well as Prim Posy, Lemony Gem, "Serena", "Pinkie Feather", "Rainy Feather", and "Sweet Pop", was to appear in Friendship is Magic, part 2.[1]

Mango Dash first appears in Dragonshy. She is briefly seen frolicking with Aura and "Ruby Pinch" in the Ponyville fountain square. She later appears in both Fluttershy and Rainbow Dash's flashbacks in The Cutie Mark Chronicles.

Mango Dash briefly appears taking loopty-hooping lessons from Apple Bloom in The Cutie Pox, appears next to "Princess Erroria" and "Sweet Pop" during The Perfect Stallion in Hearts and Hooves Day, and taunts a filly Fluttershy in a flashback in Hurricane Fluttershy.

Mango Dash appears in Flight to the Finish rolling her eyes at Snips and Snails. She also muscles in on the Cutie Mark Crusaders "Twilight Time" sessions with Twilight Sparkle in Twilight Time.

In Fame and Misfortune, Mango Dash appears as one of Rainbow Dash's fans due to the publication of the Mane Six's Friendship journal.

In The Washouts, Mango Dash spectates each of the titular group's two Ponyville shows.

In 2, 4, 6, Greaaat, Mango Dash appears in the audience for the halftime cheerleading routine during the buckball game between the School of Friendship and the School of Magic

In My Little Pony: Friendship is Magic Issue #47, Mango Dash appears on pages 7-9 at Mayor Filthy Rich's unveiling of a new Ponyville playground. 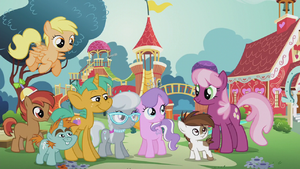