Mare Do Well is a character in Gameloft's mobile game, and serves as an enemy minion during the "Nightmare Night at the Museum" event. She also has a story role in the event with the Mane-iac. Her in-game description states, "Both superheroic and quite resolute. We wonder which pony is under that suit!" 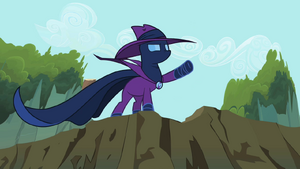 Retrieved from "https://mlp.fandom.com/wiki/Mare_Do_Well?oldid=2136614"
Community content is available under CC-BY-SA unless otherwise noted.