Marks and Recreation is the twenty-first episode of season seven of My Little Pony Friendship is Magic and the one hundred and sixty-fourth overall. The title is a play on the NBC sitcom Parks and Recreation, which was previously spoofed as the working title of The Saddle Row Review ("Saddle Row & Rec").

In this episode, the Cutie Mark Crusaders start a Cutie Mark Day Camp only to find out that one of their campers doesn't want a cutie mark.

This episode was previously scheduled to premiere on Canada's Treehouse TV channel on July 1, 2017.

A clip of the episode was privately shown at Hasbro's HASCON on September 9, 2017.[1]

Vincent Tong was nominated for a 2018 UBCP/ACTRA award for "Best Voice" for his portrayal of Rumble in this episode.[2]

The episode opens with the Cutie Mark Crusaders giving "cutie mark counseling" to a filly named Kettle Corn, who likes to paint circles. Unfortunately, it gets late in the day, and after wrapping up their session with Kettle Corn, the Crusaders have to turn away the foals lined up outside their clubhouse.

Unable to work with blank flanks one at a time, the Crusaders decide to open a Cutie Mark Day Camp so they can help multiple blank flanks at once as well as foster teamwork among the foals themselves. Because they need a wide open area with a lot of activities for it, they decide to open their day camp at Camp Friendship, where Applejack and Coloratura used to go when they were little.

As the Crusaders advertise their day camp in Ponyville, they see Rumble passing by and extend a flyer invitation for him to join. Rumble starts stomping on the flyer when his older brother Thunderlane appears. He flies off wanting to show Thunderlane a new flying trick he's been practicing, but Thunderlane notices the crumpled-up flyer and gets an idea.

The trouble with Rumble

Some time later, the Crusaders open their camp to the blanks flanks of Ponyville, encouraging a variety of fun activities and fostering togetherness as they try out for their cutie marks. When Thunderlane arrives to drop off Rumble, the rest of the foals marvel at meeting one of the Wonderbolts, and Thunderlane briefly impresses them with his horseshoe-tossing and aerial skills before flying off to Wonderbolts practice.

Throughout the day, Rumble shows little to no enthusiasm for the camp activities, from horseshoe-tossing to kayaking to archery to line-dancing to writing haikus. Not having any fun, he eventually flies off. In his absence, Kettle Corn gets her cutie mark in haiku-writing. Even though she isn't a blank flank anymore, she wants to come back to camp and keep painting circles, which Scootaloo happily encourages.

The Crusaders are proud that their day camp is such a success, but they worry about Rumble and his lack of enthusiasm, figuring that he is feeling discouraged by a supposed failure at his activities. They find him at the Wonderbolts' practice stadium watching them perform. The Crusaders apologize for failing to find something that Rumble can excel in, and they promise to help him get his cutie mark.

"Actually, I don't need your help. Because I don't want to get a cutie mark!"
— Rumble

The Crusaders are shocked by Rumble's declaration and ask him why he doesn't want a cutie mark. Rumble explains that cutie marks force ponies to do only one thing for their entire lives, using the Crusaders themselves and their cutie mark counseling as an example. When the Crusaders fail to convince him otherwise, he flies off in frustration again. The Crusaders decide not to force Rumble and help the rest of the camp foals.

On the Ponyville racetrack, Rumble practices his aerial diving when Thunderlane appears and breaks his concentration. Rumble expresses some frustration at being interrupted, and his brother apologizes, saying he's sure that Rumble will be a great flyer one day. When asked why he isn't at cutie mark camp, Rumble says he doesn't want to get a cutie mark in any of their activities. Regardless, Thunderlane says he's going back the next day, saying he "can't be a blank flank forever". His words gives Rumble an idea.

The next day, the Crusaders' day camp lets out after jam-making, though Pipsqueak is upset that he still doesn't have his cutie mark. As he expresses concern about getting a cutie mark in something he's good at or something he likes to do, Rumble bursts in spouting his ideology on how cutie marks limit ponies to doing just one thing. He suddenly breaks into song and slowly turns the rest of the campers over to his way of thinking, much to the Crusaders' dismay. At the end of the song, Rumble declares that he's opening his own camp on the other end of Camp Friendship where foals embrace being blank flanks.

More than just a cutie mark

As the Crusaders get even more annoyed with Rumble's stubbornness, the Wonderbolts fly over the camp, and Scootaloo thinks of someone who can reason with him. Back at the practice stadium, the Crusaders explain the situation to Thunderlane, who reveals that Rumble is actually good at all the camp's activities. Thunderlane explains that ever since he became a Wonderbolt, Rumble has watched him constantly and wanted to fly like him. Because he wants to be a Wonderbolt himself someday, he refuses to give anything else a chance. Apple Bloom realizes Rumble isn't afraid of doing just one thing—he's afraid that one thing will prevent him from realizing his dream.

Back at camp, Rumble and the other foals have become bored from not doing anything. Suddenly, the Crusaders return—with special guest Thunderlane—and invite the foals to do camp activities and play games with a member of the Wonderbolts. Little by little, the foals are convinced to return to the Crusaders' camp, leaving Rumble all by himself. Jealous of the fun his fellow blank flanks are having, Rumble eventually joins in. He sees Thunderlane making food, and Thunderlane says even though his cutie mark is about going fast, he really likes to cook.

Finally convinced that ponies aren't limited by their cutie marks, Rumble joins his brother in making food. When the Crusaders invite him to run the camp obstacle course, Rumble says he'll do it tomorrow and that he's no longer worried about what kind of cutie mark he'll get.

"I guess it's time to see what other stuff I can do."
— Rumble

Apple Bloom: We'll try somethin' else tomorrow.
Kettle Corn: But I like circle painting.
Scootaloo: And on the way to figuring out what you're meant to do, you'll find a ton more stuff you like. That's what makes looking for your cutie mark so great.

Rumble: I thought you said we were gonna go practice for the Wonderbolts Ponyville Extravaganza show.
Thunderlane: I'm going to Wonderbolt practice. You're going to cutie mark practice.

Sweetie Belle: You remember how long it took us to get our cutie marks?
Apple Bloom: [shivers] I remember the nightmares.

Apple Bloom: I... I must have hay in my ears, because I thought I just heard Rumble say—
Rumble: You heard right! I don't want my cutie mark!
Sweetie Belle: [gasps] He said it again!

Apple Bloom: Granny always says, "Some ponies have to find their own hay."
Scootaloo: Are you sure she didn't mean "find their own way"?

Skeedaddle: What if I get a cutie mark in being bored?

Thunderlane: I know I'm a Wonderbolt and my cutie mark is all about moving fast, but I really like to cook!
Rumble: Since when?
Thunderlane: We take turns making the meals at Wonderbolts HQ. I didn't want to at first, but now I love it! I just wish I'd tried it sooner.
Rumble: You do?
Thunderlane: Of course! There's more to me than just flying, and I bet there's more to you, too.

Rumble: I already know I'm a good flyer. It kinda runs in the family. 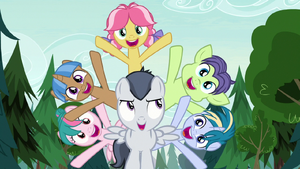